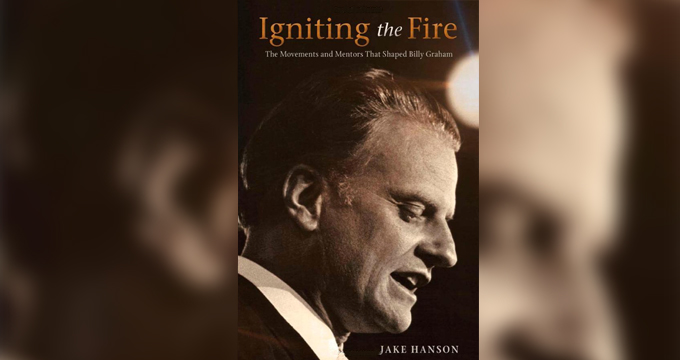 The life and ministry of Dr. Billy Graham has impacted millions of people all over the world. His name has become synonymous with his “crusades,” which won masses of people to Christ. Yet, most people know little of how his ministry began. In today’s post, Jake Hanson shares what he learned about Dr. Graham’s personal faith history and early ministry.

Growing up in what Time Magazine called the “winter” of Billy Graham’s ministry, I witnessed him as a slow, even if winsome, grandfatherly preacher. I did not know the passionate, lively preacher of his early years. That has been remedied by reruns of Billy Graham’s classic crusades on TV in the past few years. What has been just as enlightening, but has taken longer for me to recognize, is the deeply passionate spirituality which lay underneath the evangelist’s public ministry.

One unique example of this spirituality in his early life is in his pursuit of the fullness of the Holy Spirit, which shaped his faith.

The first significant evidence for this search comes in February 1943, on the campus of Wheaton College, where Billy was a senior. The school was in the midst of a spontaneous (though much hoped and prayed for) revival, when hundreds of students began taking turns confessing sins before the student body in chapel. Dr. V. Raymond Edman, the president of the school, ended one of the services by inviting anyone who desired prayer to go into a room behind the chapel. Billy Graham, who was the president of the student Christian Council, was there presumably to assist the president by praying with students. But according to Dr. Edman, Billy waited for an opportune moment to come to him and ask for prayer for himself—not for salvation, as some were doing, but that he might receive the ‘fullness of the Holy Spirit.’

He was likely influenced by the teaching of the Christian and Missionary Alliance, a denomination with which he had associated himself in the preceding years, and the denomination of Dr. Edman, the school’s president. One of the four pillars of Alliance teaching is that Christ sanctifies believers some time after salvation in order to empower them for holy living and works of ministry. This is distinct from Pentecostalism, which teaches that the baptism of the Holy Spirit is marked by speaking in tongues.

Fast-forward a few years to 1946. Billy had graduated from college and had served a short stint as pastor of a church in the suburbs of Chicago. Now he was the vice-president of Youth for Christ, a ministry founded by Torrey Johnson, which was holding evangelistic rallies for young people around the world.

In October, Billy, along with his new song-leader Cliff Barrows, was in Wales during a tour of Europe for the purpose of bringing the light of the gospel to a continent picking up the pieces from the Second World War. But he was finding the soil in Great Britain harder than he had anticipated. He sensed that he lacked the power necessary for the task.

With this on his mind, Billy met with Welsh evangelist Stephen Olford, whose spiritual power had impressed him. Olford encouraged him to submit moment by moment in total dedication to the Lord. As they searched the Bible together and prayed for several hours, Billy Graham suddenly cried out, like the biblical Jacob, “Lord I will not let Thee go except Thou bless me!”

And then something happened. He claimed that his heart was “aflood with the Holy Spirit,” and he began pacing back and forth, saying, “I have it! I’m filled!” In the next few days, his evangelistic services in Wales began to take on renewed power and effectiveness.

So what are we to make of this aspect of Billy Graham’s spirituality in light of the fact that his views were tempered over the years?

Jesus tells His followers to “Ask…seek…and knock” (Luke 11:9) for the Holy Spirit. Perhaps Billy Graham had questionable motivations at times (like all of us), and perhaps even his theology in these early years did not precisely match his mature beliefs. But, who can deny that he was a man used mightily by the Holy Spirit? These two instances are more than examples of his early pursuit for a blessing of the Holy Spirit.  They also help demonstrate his passionate pursuit of the power of God for ministry.

It is this pursuit and his persistent and deep spirituality that is at the heart of the ministry of this great evangelist—an aspect which should not be overlooked in understanding Billy Graham’s evangelistic success.