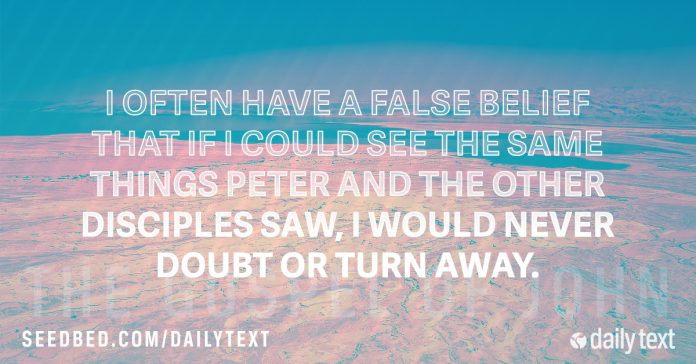 This week I am away for a much needed week of investing in my own heart, mind, body and soul. It’s a recovery week of sorts. I will treasure your prayers. My good friend, Omar Al-Rikabi, will be taking the helm for this final week of John’s Gospel. Omar pastors the First United Methodist Church in Heath, Texas, a suburb of Dallas. You will love him.

6 He said, “Throw your net on the right side of the boat and you will find some.” When they did, they were unable to haul the net in because of the large number of fish.

7 Then the disciple whom Jesus loved said to Peter, “It is the Lord!” As soon as Simon Peter heard him say, “It is the Lord,” he wrapped his outer garment around him (for he had taken it off) and jumped into the water. 8 The other disciples followed in the boat, towing the net full of fish, for they were not far from shore, about a hundred yards. 9 When they landed, they saw a fire of burning coals there with fish on it, and some bread.

10 Jesus said to them, “Bring some of the fish you have just caught.” 11 So Simon Peter climbed back into the boat and dragged the net ashore. It was full of large fish, 153, but even with so many the net was not torn.

In yesterday’s text we looked at this deja vu scene between the first time Jesus and Peter met on the shores of Galilee, and this time after Peter had denied Jesus three times. In both scenes Peter has been fishing all night and caught nothing, but then Jesus appears and tells him to cast his nets again. And both times the nets almost (but never do) break under the strain of the catch.

Now Simon Peter comes to shore and there is Jesus, with a charcoal fire and some bread. Imagine the connections running through Peter’s thoughts. Remember the last time Peter and Jesus were near a charcoal fire? It was the week before, in John 18, when Jesus was on trial at the high priest’s home, and Peter was right outside the window in the courtyard:

18 Because it was cold, the household servants and the guards had made a charcoal fire. They stood around it, warming themselves, and Peter stood with them, warming himself.

Now on the beach after the resurrection, Peter had to be wondering what was about to happen. There was not only the fire, but also the bread. And Peter had the fish. The last time they broke bread together was in the Upper Room. The last time fish were involved Jesus fed the 5,000.

But what was happening now? Remember, we know how the story ends, but imagine what was going through Peter’s head in this moment? Was this a setup for a divine miracle, or a divine takedown?

Then Jesus breaks the tension and says, “Bring me some of the fish you have caught,” and the miracle of renewed creation gets breakfast ready.

I often have a false belief that if I could see the same things Peter and the other disciples saw, I would never doubt or turn away. But they saw, and they believed… and they still fled. How much greater am I?

Remember that Peter (the one whom Jesus said he would build his church on), had seen all the miracles, and still publicly rejected Jesus. And in his sin and shame he did what a lot of us do… or at least what I usually do: he gave up and went back to his old ways.

But John ends his telling of the story with the fulness of good news: That sin is real and its effects are catastrophic… but grace abounds. No matter how we go back to the old ways, Jesus does not show up to destroy us, but to restore us.

Heavenly Father, thank you that when we turn away, your love remains steadfast. In moments when we are in the dark and wondering what will happen next, may the Holy Spirit prepare for us signs of the New Creation grace all around us. In your Son Jesus Christ’s name we pray, amen.

1. What do you think is significant about Jesus recreating this scene on the beach?

2. Do you ever live in a tension wondering if God is going to condemn you or restore you? What does that look like?

3. What are the signs around you, like breadcrumbs on a trail, of divine grace?