Book Review: Junia is Not Alone (Do Women Belong in the Pulplit?) - Seedbed
close
Menu

Junia or Junias? One little letter makes a big difference in how Romans 16:7 is interpreted. The question this passage poses is one that has divided the church for decades – do women belong in the pulpit? Scot McKnight is shouting a resounding “YES!” with the publication of his ebook Junia is Not Alone.

Let’s rewind a bit. Translations of this passage have varied a lot. Some translated it as Junias, the name of a man. Others translated it as Junia, without the ‘s’, which was a common name for a woman in the ancient world. The text refers to a person who was “outstanding among the apostles.” Could it be? Paul is praising a woman who is an apostle? That’s the hang up. Some translators say this person was a man, some say she was a woman, and Scot McKnight says she simply got a sex change. No really. The title of the third chapter is “How Junia Got a Sex Change.”

I’m getting too excited (I know, I’m a nerd) – let’s take a step back again. McKnight lays out his entire argument in the first chapter:

1. Junia was a woman

2. There is no evidence that any man had the name “Junias.”

3. Junia, is not as some have argued, a contracted name of Junianus.

4. “Among the apostles” means Junia herself was an apostle and not simply that the apostles thought she was a good egg.

He details the stories of other women in scripture and throughout history who have made a resounding impact in the Church. He briefly includes a fascinating assertion about Phoebe, a deacon (not deaconess), who was probably the first person to read Romans aloud in public because she was possibly the letter courier, which meant she was responsible for answering questions from the Romans about Paul’s letter. McKnight (and Rita Finger who he credits in the book) explain(s) this makes Phoebe, a woman, the first commentator on Romans.

As the book progresses, McKnight explains that Junia had a sex change.

“It happened, or can be illustrated, in Greek by changing the accent in an originally unaccented text from Jun-I-an to JuniAn. This change in accent led to the male name, JuniaS, the Anglicanized form. But as [Eldon] Epp and others have shown, Junias is a man who didn’t exist with a name that didn’t exist in the ancient world. … all early translations of the New Testament into other languages listed Junia as a woman.”

“So from 1927 until the 1990s, we had the two principal Greek (composite) texts that all pastors and students use – Nestle-Aland and UBS – and the New Testaments all translators use when they translate, providing us with a man named Junias.”

McKnight writes that the editors in 1927 were politcally influnced and simply echoed a thought that Bernadette Brooten voiced: “Because a woman could not have been an apostle, the woman here called an apostle could not have been a woman.” Finally in 1998, the Jubilee Edition of the Nestle-Aland and the UBS printed the same text, and Junia was alive again.

It is a compelling argument, that’s thoroughly researched and well written, even humorous at times. It only took about 30 minutes to read, and it costs less than $3 (you can get it on Amazon.com here). If you have ever wrestled with the role of a woman within the Church, you MUST read this. It was something I struggled with for years. I was constantly confronted with people who thought Junia was actually Junias. After reading this I can confidently say Junia was a woman, and I can explain why.

View all of our resources on Women and Ministry. 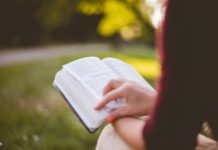 A New Resource for Women (and Men) in Leadership

© Seedbed 2021
Book Review: Junia is Not Alone (Do Women Belong in the Pulplit?)
MORE STORIES