23 Then he got into the boat and his disciples followed him. 24 Suddenly a furious storm came up on the lake, so that the waves swept over the boat. But Jesus was sleeping.25 The disciples went and woke him, saying, “Lord, save us! We’re going to drown!”

26 He replied, “You of little faith, why are you so afraid?” Then he got up and rebuked the winds and the waves, and it was completely calm.

27 The men were amazed and asked, “What kind of man is this? Even the winds and the waves obey him!”

Do you believe this really happened?

I mean, do you take this story literally? Since the Enlightenment and the emergence of the age of reason, this story has fallen on hard times. Some consider it a myth. Others interpret it as an allegory. Some think it was completely made up long after Jesus life.

We need to acknowledge that those who hold these positions also tend to dismiss the rest of the Bible on these same grounds. They do not grant the possibility of miracles, instead considering Jesus was mostly dealing with psycho-somatic illnesses (it was all in their heads). They do not believe in Satan as a personal entity. They acknowledge all these stories held deep meaning but they were largely just that—fictional stories designed to point people to understand something about God or something else.

They would consider the writers of Scriptures to be products of the age in which they lived, bound in their own historical and cultural contexts and limited to the conventional understandings of their day.

Here’s my take. I think the Enlightenment rationalist interpreters I have just described are also products of their age and bound in their own historical and cultural contexts and as a consequence are limited by the conventional understandings of their day.

Here’s the big difference. While we are all subject to the limitations of our own era of history—from the biblical writers to the present day—something dramatically different happens when the Spirit of God inspires human authors to record revealed truth for all the ages to come. This is what’s going on in the documents that make up what we call the Holy Bible. It is an extraordinarily exceptional occurrence. It has been carefully preserved and propagated from generation to generation right to the present day. It can be trusted and it must be revered. It can be understood by a child yet it requires trustworthy, saintly scholars to help us plumb its depths.

So as for me, I don’t doubt a word of it. I believe Jesus was in an actual boat on the actual Sea of Galilee with a dozen actual followers of his and that he was actually asleep and when he was awakened, he really did command the storm to be stilled and the storm really did obey him.

There’s a lot that could be said here. I’ll tell you what the Holy Spirit is saying to me today through the text. He’s telling me to behold Jesus—sound asleep in the stern of the boat— while complete and utter chaos threatened to destroy all of their lives. He’s telling me that the same person who was asleep in the boat that day is nearer to me now than my breath. Even better, he’s nearer to me now than he was to them then. In fact, he dwells within me by the power of the Holy Spirit, filling me with all the fullness of God and making me into the kind of person I was intended to be. He’s telling me that no matter how strong the winds or high the waves or chaotic the chaos, I need not be afraid. In fact, I could probably take a nap while he sorts it all out.

I think I will. 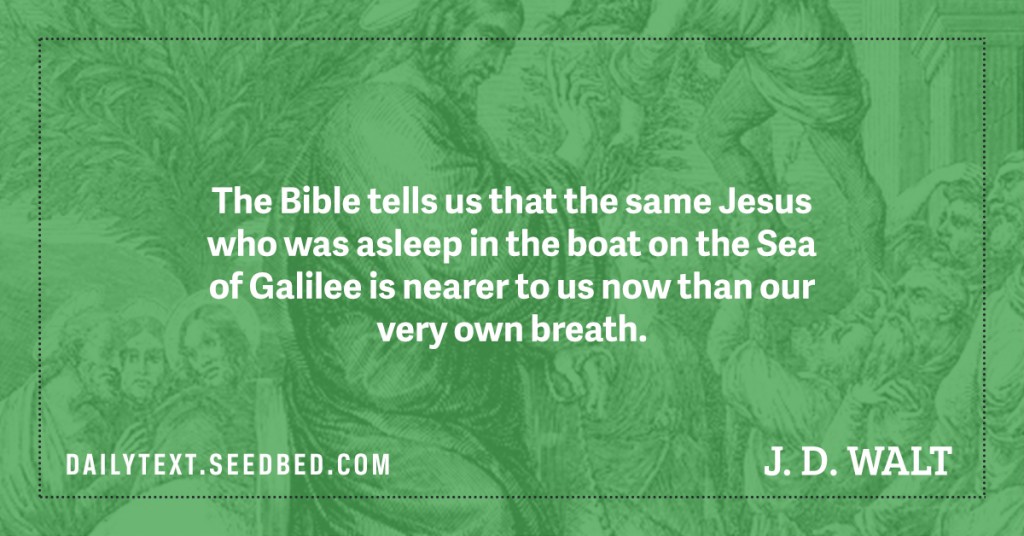 1. So how about it? Do you truly believe Jesus took authority over this storm and brought it to calm on the Sea of Galilee?

2. Does a rationalistic, scientific worldview keep you from believing in the supernatural claims of the Bible? Have you ever considered that you could be trapped by the intellectual currents of our time?

3. Are you facing strong winds and high waves and chaotic conditions in your life right now? Do you know someone who is? Does it feel like Jesus is asleep? What might it look like to wake him up? How about lying down beside him? ;0)
—————-