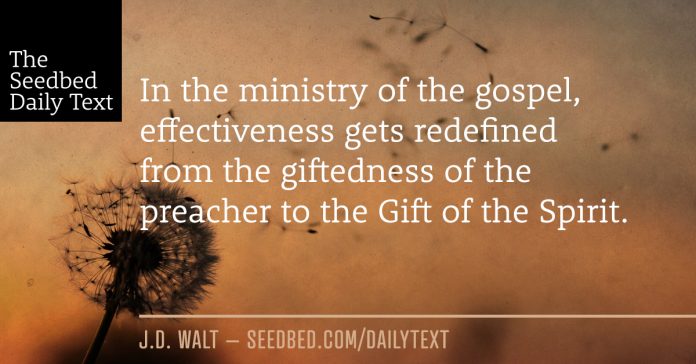 At Iconium Paul and Barnabas went as usual into the Jewish synagogue. There they spoke so effectively that a great number of Jews and Greeks believed. But the Jews who refused to believe stirred up the other Gentiles and poisoned their minds against the brothers. So Paul and Barnabas spent considerable time there, speaking boldly for the Lord, who confirmed the message of his grace by enabling them to perform signs and wonders. The people of the city were divided; some sided with the Jews, others with the apostles. There was a plot afoot among both Gentiles and Jews,together with their leaders, to mistreat them and stone them. But they found out about it and fled to the Lycaonian cities of Lystra and Derbe and to the surrounding country, where they continued to preach the gospel.

Something troubled me as I read this text today. The words sounded so out of character not only as relates to Paul but to the bible in general. It’s the second sentence of the first verse.

There they spoke so effectively that a great number of Jews and Greeks believed.

This translation makes it sound as though people believed because of the effectiveness of the preachers. It’s like they are saying the preacher was somehow responsible for making the Scriptures “come to life.” My friend and colleague, Lawson Stone, an Old Testament Scholar, takes this idea to task in an article on his blog.

“The Bible does not need to ‘come alive’ and it doesn’t need me or any other teacher to bring it to life. The Bible is already very, very much alive. Disconcertingly alive. Destabilizingly alive. If we’ll just drill down and listen, we’ll discover it has been quite alive for quite a long time. It is we who need to be ‘made alive,’ brought to life, or whatever.”

I love how Paul put it to the Corinthian church, who were accustomed to  “effective” preachers. Paul recognized clearly that authority and power were in the gospel itself; that he brought nothing to it other than loving obedience. And truth be told, he couldn’t even bring that without the Holy Spirit’s empowerment.

And so it was with me, brothers and sisters. When I came to you, I did not come with eloquence or human wisdom as I proclaimed to you the testimony about God. For I resolved to know nothing while I was with you except Jesus Christ and him crucified. I came to you in weakness with great fear and trembling. My message and my preaching were not with wise and persuasive words, but with a demonstration of the Spirit’s power, so that your faith might not rest on human wisdom, but on God’s power.
(1 Corinthians 2:1-5)

I think that captures what the text intends to say today. They spoke in such a manner that the people witnessed a demonstration of the Spirit’s power.

Effectiveness is not a bad thing, as though we should somehow aspire to be a bad communicator in order for the gospel to be heard. In the ministry of the gospel, effectiveness gets redefined from the giftedness of the preacher to the Gift of the Spirit. Are we learning to share the gospel “in such a manner” that the Spirit does the demonstrating? Or is the demonstration more about our own aspiration to be a “great” preacher.

Put another way, would you and I be willing to trade in our effectiveness as a “communicator” (the in vogue term for preachers today) in exchange for a demonstration of the Spirit’s power? It could come to that.

I think you know the preferred answer.