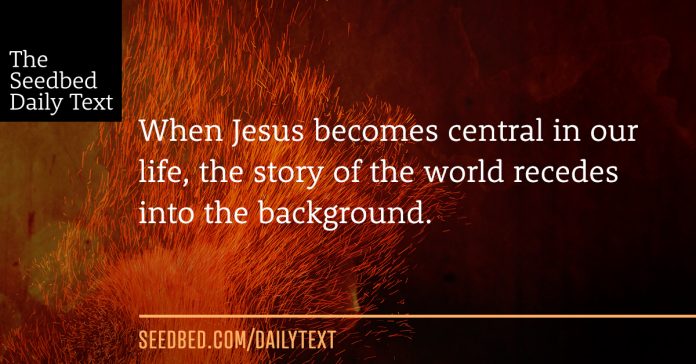 14 King Herod heard about this, for Jesus’ name had become well known. Some were saying, “John the Baptist has been raised from the dead, and that is why miraculous powers are at work in him.”

And still others claimed, “He is a prophet, like one of the prophets of long ago.”

16 But when Herod heard this, he said, “John, whom I beheaded, has been raised from the dead!”

17 For Herod himself had given orders to have John arrested, and he had him bound and put in prison. He did this because of Herodias, his brother Philip’s wife, whom he had married. 18 For John had been saying to Herod, “It is not lawful for you to have your brother’s wife.” 19 So Herodias nursed a grudge against John and wanted to kill him. But she was not able to, 20 because Herod feared John and protected him, knowing him to be a righteous and holy man. When Herod heard John, he was greatly puzzled; yet he liked to listen to him.

So far, Mark has pretty much given us the story of the Kingdom of God. You remember how Mark began with John and by the ninth verse, he’s introducing Jesus. Speaking of the Kingdom story, remember Jesus’ first message and manifesto:

“The time has come,” he said. “The kingdom of God has come near. Repent and believe the good news!” Mark 1:15.

From there Mark has taken us on a deep dive into the Kingdom with Jesus, the King.

79. At the midpoint of chapter six, Mark changes gears with a type of, “Meanwhile, back at the ranch,” taking us out of the realm of the Kingdom and into the story of the World. When it comes to Jesus, the people are all over the place. Despite his growing following, there seems to be a whole lot of people who are only marginally paying attention. To them, Jesus is a phenomenon. He’s a news story, a guru, a political leader, a trouble maker. This group says one thing and that group says another. King Herod, haunted by his own heinous murder of the great prophet John, hears about Jesus and fears he is John raised from the dead.

80. The thing we need to keep at the forefront of of our mind is until Jesus becomes the center of our devotion, he’s just another distraction. When Jesus becomes central in our life, the story of the World recedes into the background. When we “seek first his Kingdom and his righteousness,” we happily discover how the “world” was always supposed to work. Until then, faith is something we salute, church is a place we go on Sunday (maybe), and life consists in doing everything in our power to make our life work; building our own little kingdoms and generally justifying whatever seems right in our own eyes.

Over the past hundred years or so we’ve lived through a period of what I would call, “Christian America.” In Christian America everyone was sort of a Christian. It was hard to tell where the world left off and the church began, so seamless was their relationship. Our money didn’t say “Caesar.” It claimed we trusted in God. We pledged allegiance to a flag while declaring our nation was “under God.” The story of the Kingdom of the World as we knew it seemed right down the middle of the fairway of the story of the Kingdom of God.

In case you missed the memo, “Christian America” is over. Actually, it’s been over for some time now. It’s just getting more and more painfully obvious. We now move into an era where we can go in one of three directions:

1. We can do everything in our power to rise up and take back “Christian America;” to try and find our way back to that mythical age when so many saw the Kingdom vision and the American dream as two sides of the same coin. (i.e. Ten Commandments on the Courthouse walls, prayer in schools, and more than just Chik-fil-a closed on Sunday.)

2. We can humble ourselves, pledge our allegiance solely to King Jesus, and do everything we possibly can to be the real Church in America. We can recognize it’s our calling to declare and demonstrate the beautifully distinctive Kingdom of God rather than delegating it to the government; whose calling is to regulate the story of the World according to the will of the world’s people.

3. We can “go with the flow,” celebrating a freedom with no fences, confusing the lines between liberty and love, and otherwise baptizing the will of the world in the name of God.

Blaise Pascal may have said it best in his unpublished Penses when he wrote, “We run heedlessly into the abyss after putting something in front of us to stop us from seeing it.”

Well-meaning, good hearted Christians will go down each of these paths. So which way will you go? Which way will I go?

Spirit of the Living God, fall afresh on me. Jesus, you know how we struggle with our politics. Would you reveal your Kingdom to us in the way that all at once shows us it is both not of this world and yet planted right in the middle of it. We can’t find that place without you leading us there. Melt me. Mold me. Fill me. Use me. For the glory of your name, Amen.

How do you assess the three options? Is there a fourth? How do you see it?