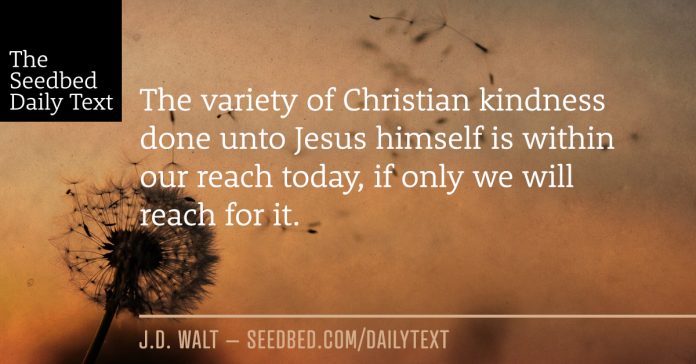 The next day we landed at Sidon; and Julius, in kindness to Paul, allowed him to go to his friends so they might provide for his needs. From there we put out to sea again and passed to the lee of Cyprus because the winds were against us. When we had sailed across the open sea off the coast of Cilicia and Pamphylia, we landed at Myra in Lycia. There the centurion found an Alexandrian ship sailing for Italy and put us on board. We made slow headway for many days and had difficulty arriving off Cnidus. When the wind did not allow us to hold our course, we sailed to the lee of Crete, opposite Salmone. We moved along the coast with difficulty and came to a place called Fair Havens, near the town of Lasea.

He was a centurion, but not just any centurion. Julius was a member of the Imperial Regiment; the famed and feared Praetorian Guard charged with the protection of the Caesar himself. Julius likely witnessed the conversation in the court when Paul addressed King Agrippa. He may well have heard and responded to the Gospel that day. At minimum he would have been in the cross-hares of Paul’s proclamation.

About this Imperial Guard– let’s just say Caesar surrounded himself with the kind of centurion who would make a regular soldier tremble in fear. If we had to detail the character traits and qualifications of such a Centurion, kindness would probably not make the list. Today’s text tells us that Julius showed kindness to Paul. He granted him special favor.

Did Julius have any idea he was dealing with perhaps the second most important person who ever lived? Not a chance. Why did Luke choose to tell us this little detail about Julius? It obviously impressed him.

No one usually realizes at the time the real significance of our everyday encounters with ordinary people. We rarely have any idea that some small act of kindness might have eternal impact. Jesus said it would be this way. He said in the end people will fall into two basic categories: those who show kindness to people who can’t pay them back and those who don’t. In fact, the great surprise of the Judgment will come when the Lord says to those who demonstrated this variety of kindness,

Then comes the harrowing question, “Lord, when did we see you?” Followed by the breathtaking reply, “Truly I tell you, whatever you did for one of the least of these my brothers and sisters, you did for me.”

Here’s my hunch. When the Day of Judgment comes, we will behold Julius, the Centurion, standing before Jesus, the Lord. Can’t you see Jesus motioning to Paul, the prisoner, to join him as he welcomes Julius into the Kingdom, saying something to the effect of, “Julius, remember that prisoner on that crazy voyage from Casarea to Rome . . . you remember the one where the ship went down in the storm . . . the way you treated him with unusual kindness . . . his name was Paul, but it was really me you were showing kindness to. Well done!” My hunch is Julius will not remember it at all. And isn’t that the point? It will be those unremembered kindnesses from our perspective that Jesus will find unforgettable. We weren’t trying to earn any points, just quietly doing the work of God in our little corner of the world.

When all is said and done, we will come to the painful discovery that a lot more was said than done. We will finally realize that angels visited us in the disguise of strangers, and we encountered Jesus wearing handcuffs and leg irons. The question won’t be whether we recognized him. It will be did we help him? Did we show him kindness?

This variety of kindness is within our reach today, if only we will reach for it.

Oh when the Saints go marching in . . . Lord, I want to be in that number.

How might you go about becoming a person who is “unusually kind?” What about today? What is  holding you back?