How Faith Is Like a "Get Out of Jail Free" Card, and How It's Not - Seedbed
close
Menu 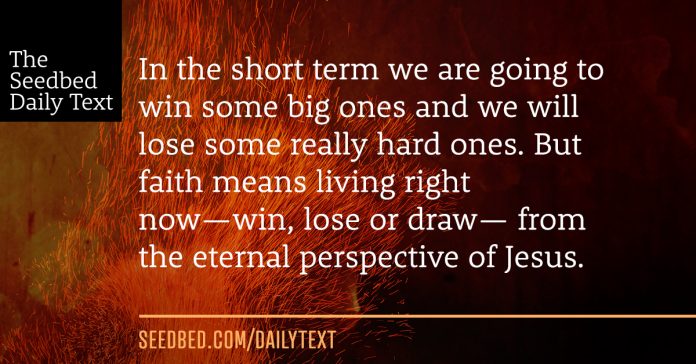 60 Then the high priest stood up before them and asked Jesus, “Are you not going to answer? What is this testimony that these men are bringing against you?” 61 But Jesus remained silent and gave no answer.

Again the high priest asked him, “Are you the Messiah, the Son of the Blessed One?”

62 “I am,” said Jesus. “And you will see the Son of Man sitting at the right hand of the Mighty One and coming on the clouds of heaven.”

63 The high priest tore his clothes. “Why do we need any more witnesses?” he asked. 64 “You have heard the blasphemy. What do you think?”

They all condemned him as worthy of death. 65 Then some began to spit at him; they blindfolded him, struck him with their fists, and said, “Prophesy!” And the guards took him and beat him.

Back in Mark 8 we get this exchange between Jesus and his disciples.

“But what about you?” he asked. “Who do you say I am?”Peter answered, “You are the Messiah.”Jesus warned them not to tell anyone about him.He then began to teach them that the Son of Man must suffer many things and be rejected by the elders, the chief priests and the teachers of the law, and that he must be killed and after three days rise again. He spoke plainly about this, and Peter took him aside and began to rebuke him. Mark 8:29-32.

In today’s text we get this exchange between Jesus and the religious establishment.

Again the high priest asked him, “Are you the Messiah, the Son of the Blessed One?”

62 “I am,” said Jesus. “And you will see the Son of Man sitting at the right hand of the Mighty One and coming on the clouds of heaven.”

Look at the interplay here. Peter says, “You are the Messiah, while Caiphas says, “Are you the Messiah?” Peter and Caiphas were talking about the same thing—their own concept of who the Messiah would be and what he would do. To them, Messiah meant god-like power and authority, but it did not mean God. This brings us to the profound ironic twist of today’s text. Here is God in disguise, arrested and bound and on trial by the leaders of his chosen people for his claim to messianic status and he plays the ultimate God card. It is as though he were saying, “You think I am claiming to be the Messiah, and I am, but what you really need to know here is you aren’t dealing with a Messiah who is a threat to your power as you imagine it or as a solution to your problems as my disciples conceive of it. The Eternal Judge of Heaven and Earth stands before you and is bringing a deliverance that will make your petty political problems seem like a playground scuffle over a game of marbles. You are looking for the defeat of your political enemies. I have come to defeat the supreme enemy of the powers of evil. And one more thing. Your rejection of me and my crucifixion will turn out to be my resurrection from the dead and the eternal redemption of all who will believe in my name–which could even include you.”

That’s my take on Jesus trial before the Sanhedrin this time through. But here’s where I wrestle with it and perhaps you do too. I’m thinking, “So what difference does all this make for me and my challenges and problems today and tomorrow and the next day?” Like you, I’m facing some pretty hard things from which I need immediate deliverance. What does all this biblical analysis have to do with anything that matters right now?!

I think that’s my point. I need Jesus to be and do certain things for me right now. If he does them I will be ecstatic. If he does not I will be devastated. This has the perhaps unintended effect of putting him on trial today. Certainly Jesus can solve your and my problems, but this is not who He is and what faith is all about. He is not our domestic messiah. He is the God of Heaven and Earth who has defeated sin and death. We may get a reprieve from our cancer, but it will be back—in one form or another. The victory of God is that cancer does not ultimately win. And because cancer will lose, we have a completely different way of dealing with it now. When you know you are going to win, you play the game differently. Even better, when you know the God of Heaven and Earth is closer than your breath you play with joyful boldness—come what may. (It’s kind of like in Monopoly when you get the “Get out of Jail Free” card.)

These two stories, told from the perspective of Jesus and understood from our own limited perspective continue to unfold in an intertwining fashion right up to the present moment. In the short term we are going to win some big ones and we will lose some really hard ones. Faith literally means living right now—win, lose or draw— from the eternal perspective of Jesus. This does not mean deferring everything to the eternal hereafter—it means having the audacity to actually live in the “eternal hereafter” right-here-and-now.

Spirit of the Living God, fall afresh on me. Lord Jesus, I know you care about my problems and challenges and yet I also recognize you are working on a much much larger scale and scope of challenges and problems. I need you to come through for me yet I also recognize you have already come through for me in a much larger way. Translate this larger way into my present struggles and teach me to live from that kind of faith. Melt me. Mold me. Fill me. Use me. For the glory of your name, Jesus. Amen.

So how about you and me? On a scale from 1-10 with 10 meaning, “I am winning, even though it looks like I’m losing,” and 1 meaning, “I’m losing the battle and I’ve lost sight of who I thought God was,” where do you put yourself today?