Why It's All Your Fault - Seedbed
close
Menu 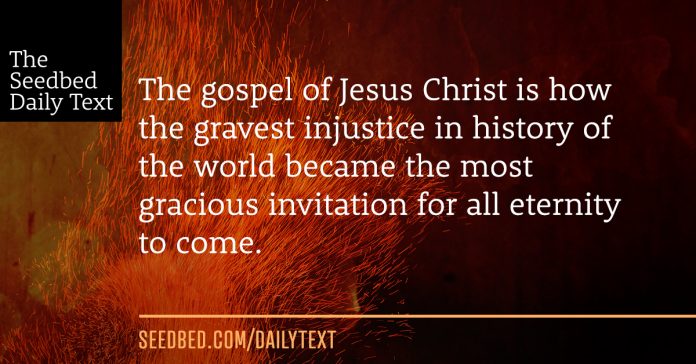 6 Now it was the custom at the festival to release a prisoner whom the people requested.7 A man called Barabbas was in prison with the insurrectionists who had committed murder in the uprising. 8 The crowd came up and asked Pilate to do for them what he usually did.

9 “Do you want me to release to you the king of the Jews?” asked Pilate, 10 knowing it was out of self-interest that the chief priests had handed Jesus over to him. 11 But the chief priests stirred up the crowd to have Pilate release Barabbas instead.

12 “What shall I do, then, with the one you call the king of the Jews?” Pilate asked them.

14 “Why? What crime has he committed?” asked Pilate.

15 Wanting to satisfy the crowd, Pilate released Barabbas to them. He had Jesus flogged,and handed him over to be crucified.

“What shall I do, then, with the one you call the king of the Jews?” Pilate asked them.

“Crucify him!” they shouted.

“Why? What crime has he committed?” asked Pilate.

Isn’t this what killed Jesus? Sure, we can blame the religious leaders, and we can blame Pilate. We can even blame Judas. What good will it do, though, to blame the crowd? This is precisely the way we escape personal responsibility. We delegate our guilt to the crowd where it can never be absolved because it will never be felt. The crowd never pleads guilty. This is how gravest of injustices happen.

In fact, this is how the greatest injustice in history went down. The gospel of Jesus Christ is how the gravest injustice in history of the world became the most gracious invitation for all eternity to come. The miracle of redemption happened because the blameless one took our blame. He was crucified by the collective crowd of the human race; all of us together. We don’t stand in the shoes of the Sanhedrin. We can’t play the role of Judas. While we may identify with Peter, we can’t play his part either. We, the human race, find our voices in the voice of the crowd, in the cruelty of their collective cry, “Crucify him!”

Did you see what I just did there; “in the cruelty of their collective cry?” Who is “their?” Exactly! “Their” is “them.” And “they” are always someone other than me.

The crowd killed Jesus, but grace can’t be received by a crowd. Grace can only be received by a person. That’s what salvation by grace through faith means. It happens when I decide to step out of the crowd and take personal responsibility, not for my part of the crime, but for the whole thing—as though it were solely my fault. Only then do I finally realize the person who bore no responsibility for any of it actually took on total responsibility for all of it. Salvation by grace through faith means coming to the experiential ownership that I deserve all the blame, yet because of the finished work of Jesus’ death and resurrection, I am now deemed blameless. It was my fault, but I am deemed faultless. I simply cannot bear that responsibility; neither can I absolve myself of it. Only God can.

It astonishes me even to write it, much less speak it aloud. I only need believe it. Only that will make me the kind of person God had in mind when he first imagined me. There is no better news than this. This, my friends, is the Gospel.

Spirit of the Living God, fall afresh on me. Lord Jesus, it is not hard to grasp that you died to forgive me for my sin. It is much harder to grasp and own that my sin crucified you; that it was my voice in the cruel crowd crying out “Crucify him!” I want to claim and own my responsibility in such a way that I can be owned completely by grace. Melt me. Mold me. Fill me. Use me. For the glory of your name, Jesus. Amen.

So does it seem like an injustice for you to accept total responsibility for the death of Jesus? If so, why? It’s important to answer that question.

Update on the Prayer Series Book. Right Here. Right Now. Jesus. Moving from a Prayer Life to a Life of Prayer is on track to be shipped on February 1. Thanks for your patience in the waiting.

Forward this email on to friends. They can SUBSCRIBE HERE.