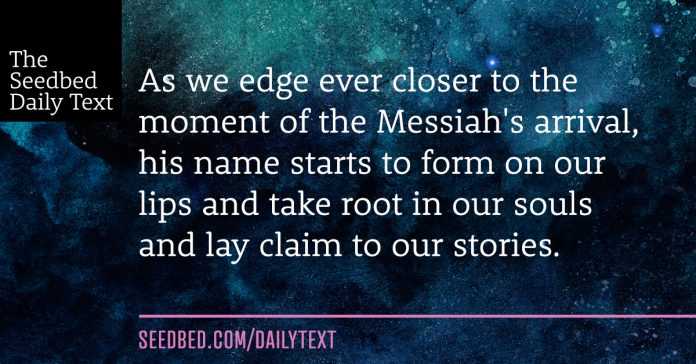 18 This is how the birth of Jesus the Messiah came about: His mother Mary was pledged to be married to Joseph, but before they came together, she was found to be pregnant through the Holy Spirit. 19 Because Joseph her husband was faithful to the law, and yet did not want to expose her to public disgrace, he had in mind to divorce her quietly.

20 But after he had considered this, an angel of the Lord appeared to him in a dream and said, “Joseph son of David, do not be afraid to take Mary home as your wife, because what is conceived in her is from the Holy Spirit. 21 She will give birth to a son, and you are to give him the name Jesus, because he will save his people from their sins.”

This passage marks the exact moment when Joseph’s life was changed forever. And ours along with it. It’s not when Mary broke the news. It’s not when he made the decision to quietly protect her honor. It’s not when he slipped into the dream or saw the angel appear. All of these are important but they aren’t the pivot. The story turns on a single word. A single name, to be exact. “She will give birth to a son, and you are to give him the name Jesus, because he will save his people from their sins.”

Jesus. What a beautiful name. The history of the world hangs on this name. Martyrs have laid down their lives for it. Sinners have found forgiveness in it. Sick have found healing in it. Dead have been called into life by it. Slaves have found freedom through it. Addicts have found restoration in it. Doubters have found their faith in it. Scholars have searched layer after layer of mysterious truth and still can’t find the end of it. And at the mention of this name, Hell shakes and hearts sing and Heaven opens wide its gates

There something irresistible about this name and the Life that fills it up. The whole story turns in this moment when his name is introduced. Indeed, every name before has been pointing to his. Adam, Noah, Abraham, Moses, David. Each covenant a chapter teaching us to long for all things to be completed in him.

Unlike those Old Testament narratives, I’ve noticed that the Gospels aren’t very concerned with character development. Most individuals are not given much of a backstory. Yes, we get Joseph’s genealogy as a recap of the Old Testament journey. But that is about Jesus. We aren’t actually told much about Joseph. We aren’t given any background on Mary. The same will happen later with Jesus’ disciples and the people that he encounters through his ministry. In the Gospels we seem to pick up everyone’s story somewhere around Five Minutes, B.C. We don’t encounter them until they are about to encounter Jesus.

That’s because the story is never about them. The Story begins when Jesus steps into it. The same is true for you. Who you were, where you were, what you were before Jesus is not the story. Your story began when Jesus stepped into it. And this Author has always been crafting the script and bending the arc and redeeming the subplots to prepare for this entrance.

As we edge ever closer to the moment of his arrival, this name starts to form on our lips and take root in our souls and lay claim to our stories. He will be called Jesus, because he will save his people from their sins.

Jesus, the name above all names. There is no better sound in our ears or on our tongues. Your name is true to its meaning. You have saved us. We thank you. And we love you.