Following Jesus: The Problem with "If" Prayers - Seedbed
close
Menu 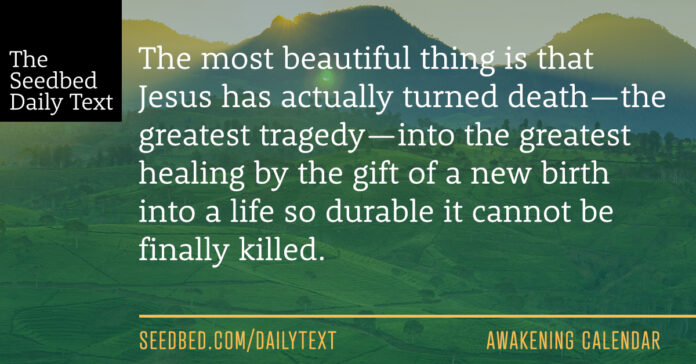 40 A man with leprosy came to him and begged him on his knees, “If you are willing, you can make me clean.”

41 Jesus was indignant. He reached out his hand and touched the man. “I am willing,” he said. “Be clean!” 42 Immediately the leprosy left him and he was cleansed.

This one is long. You might want to top off your coffee.

A man with leprosy, an incurable disabling and terminal illness, on his knees, begging the Son of God for healing. On the one hand, he is both desperate and full of faith.

A man with leprosy came to him and begged him on his knees,

On the other hand, he is hiding. Let’s examine his prayer:

“If you are willing, you can make me clean.”

He is hedging. His words betray his heart in hiding. He hides behind the unthinkable: maybe Jesus is not willing. It is like he needs to protect Jesus from his own deep sense of unworthiness and shame. It’s like he’s thinking, “I know this is impossible; what I’m asking him, and yet I know he can do it. I know he might not do it, and if he doesn’t it wouldn’t be because he couldn’t but because he was not willing to do it and if he was not willing to do it it must somehow be my fault. Shame on me.”

The other side of the shame coin looks quite different but it is the same thing. “I have done nothing to deserve this condition. I deserve to be healed. Jesus owes me healing, and if he doesn’t heal then there’s something wrong with him. Shame on God.”

This is the secret calculus of shame. We all carry it. It is far deeper than leprosy or cancer or COVID-19 or whatever symptoms we present. The real leprosy is shame. We take it on ourselves and we project it onto others and even God. The sign we are infected is the tiny two letter word preceding the request: “if.”

If you are willing, you can make me clean.

This is not the prayer of humility. It is the desperate plea of shame. Shame keeps us hiding behind an outcome we would rather die a thousand deaths than face. The reality? God is not willing. If God is not willing, there are one of two possible problems. 1. I am not worthy; or 2. God is not able. In either case, it’s the same awful outcome: God becomes dead to us. This is why people are so quick to defend God in the face of someone else’s unthinkable tragedy saying things like, “God has a reason for this.” What they are saying in a much deeper place is, “God has a reason this has not happened to me.”

I think all of this is why the inspired writer of the text used this particular term to describe Jesus’ reaction: Splagchnizomai. I don’t recommend trying to say it, but in case you want to give it a shot, here’s the phonetic spelling: splangkh-nid’-zom-ahee

It carries two different yet related meanings. The NIV translates it as “indignant.”

I believe Jesus is indignant not so much with leprosy but how leprosy has absolutely decimated and all but destroyed this precious image bearer of the living God. It is the sight of this man who has a disease—by no fault of his own, that not only coats his skin but covers his soul in a cruel, twisted, darkened sense of self worth and value as a human being. This is a son of Adam, desperately begging for deliverance, for healing for sure, but even more for “clean-ness”; that he may be embraced in his family and among his friends; that he might have dignity again. Thats it. It is why Jesus was indignant.

Now consider most of the other translations of Mark 1:41. Instead of “Jesus was indignant,” the New American Standard Bible (like most others) translate it as

Either way, what is being conveyed here is something profound is happening at literally a visceral gut level within Jesus. He could not be more stirred within in his response to this man. Let’s break down what he does next because it tells us everything we need to know about the heart of God for people.

He reached out his hand and touched the man.

Did we mention that lepers were “untouchable?” They had to go about shouting “Unclean” anytime anyone came near them for fear of spreading the dreadful kiss-of-death disease. Jesus touched him. A word would have sufficed to get the job done here. Not for Jesus.

Those are the words of God we most need to hear.

God is always willing. We need never ask “if.” There is no “if.” Stop praying, “If it is your will God, please heal this person.” Always claim God’s willingness. Now watch what he says next:

Immediately the leprosy left him and he was cleansed.

So, we ask, “If God is always willing, why isn’t everyone healed?” Short answer. We live in an incredibly broken world with enormous interrelated complexities. If a person is not physically healed it does not mean God was not willing to heal them. Nor does it mean God was not able to help them. Nor does it mean their faith was faulty. It means human brokenness is complicated. Sometimes people are physically healed. Sometimes they are not. We don’t know why. The difference is not in God’s willingness or lack of willingness to heal. We need not try to explain it as God’s sovereign plan when a child dies of cancer even though we prayed our guts out. We simply don’t understand it. But we trust God, anyway.

Think of it this way. If everyone were healed we would know the end of the age had finally come and the new Heavens and the new Earth had dawned. Why? Because if everyone were healed there would be no more sickness and no more death and no more dying. That day will come but then it will be all over. We do not live in the New Heaven and the New Earth. With the coming of Jesus and his life, death, resurrection, and ascension the age to come has now dawned. It will not come finally until he comes again. We now live at the end of the age, in the last days, in the age of the out-poured mercy of God, in the epic era of the Holy Spirit.

We always pray for healing, for cleansing, for deliverance,—no ifs, ands, or buts. We lay hold of the willingness of Jesus Christ—without apology— and we trust the outcomes to him. The most beautiful thing is that Jesus has actually turned death—the greatest tragedy—into the greatest healing by the gift of a new birth into a life so durable it cannot be finally killed. And he did it by dying himself and swallowing death up with the resurrection.

This extended sharing is the way I understand the so-called problem of evil and how I reconcile so much brokenness with God’s unlimited power and goodness. How do you understand it?

© Seedbed 2021
Following Jesus: The Problem with "If" Prayers
MORE STORIES