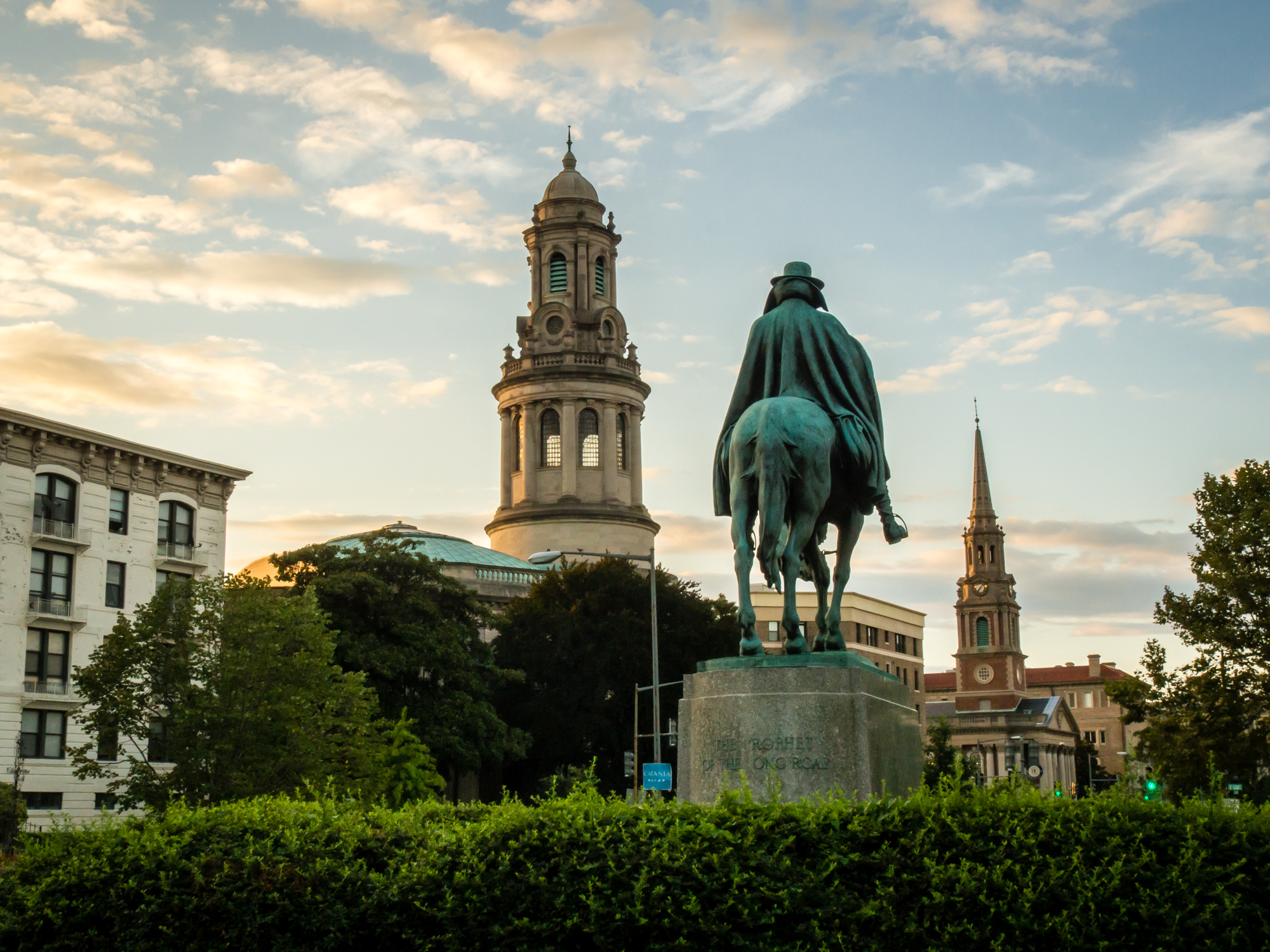 Francis Asbury and his horses crisscrossed America until he became the most recognized face in the nation during the early decades of its existence. But it wasn’t his rugged countenance that the people remembered as much as the holy passion that accompanied it.

This series on Asbury’s letters to young preachers has already covered 1) the pastor’s relationship to God, 2) how to preach well, and 3) pastoral advice. In a letter written in the last year of his life to a Jacob Gruber, the formidable Bishop touched on themes that had been constant across his years of advising young circuit riders attempting to develop a righteous people in a nascent nation. The letter, in part:

“Wrestle…”: Paul famously wrote to the church at Ephesus that “we wrestle not against flesh and blood, but against principalities, against powers, against the rulers of the darkness of this world, against spiritual wickedness in high places.”

Asbury seemed to bear this concept in mind at numerous points during his ministry. In 1792 he wrote, for instance, that “.…it is hard to civilize, methodize, and spiritualize: sin, Satan, flesh, and hell are against us” (March 18, 1792 – all dates in this article are noted from his journal).

So it was and so it ever will be in the hard work of discipleship.  In the final analysis, it is a wrestling match against spiritual forces and those whom those forces have impacted in the pastor’s field of battle. So…wrestle well!

“Preach…”: For the preacher in Asbury’s day, the sermon was a formidable tool for gaining spiritual ground in the community. Early in his tenure in America, young Asbury wrote, “My feeble frame is much fatigued with preaching twice a day; but it must drag on as long as it can; for it is my meat and drink, yea, it is the life of my soul, to be labouring for the salvation of mankind. I desire nothing but God, and to spend the remainder of my strength in suffering and labouring for him” (June 13, 1776).

Not that the task of preaching the Word was easy. “It is hard,” said Asbury, “to get and preserve the spirit of preaching: it seems as if God, at times and places, withholds his Spirit from his servants; or else the power of Satan is so strong as to depress the life and liberty of the speaker” (March 7, 1786). Not an exceptional orator himself, Asbury nonetheless recognized that any preacher would need God to bless his efforts and the devil would have to be beaten back. If both happened, blessing would ensue.

“Pray…”: Asbury meant personal prayer—a regular practice of daily worship, confession, thanksgiving and intercession.  “So prone is man to grow languid in devout exercises,” he remarked, “that without fresh and powerful exertions he will soon sink into dead formality” (January 2, 1775).  Not long after Asbury’s arrival in America, he set about to develop an exceptional prayer life. “My present practice is, to set apart about three hours out of every twenty-four for private prayer; but Satan labours much to interrupt me; nevertheless, my soul enjoys a sweet and peaceful nearness to God, for the most part, in these duties” (December 8, 1776). As E. Stanley Jones, a missionary in the trail of Asbsury, would say, “Prayer tones up the total life.  I find by actual experience I am better or worse as I pray more or less….To fail here is to fail all down the line; to succeed her is to succeed everywhere” (How to Pray).

“Cry aloud…”: Perhaps a reference to an earnest plea for God to intervene, not unlike David frequently did in the Psalms.  Asbury understood what he wanted the Almighty to do – the “happy consequences of a revival of religion” which consisted of  “pure doctrine, strict discipline, great harmony, love, and life”  (May 29, 1800).  And for Asbury and his preachers to establish these it would be, it was felt, because of their loud pleas to the God who wanted America alive for Him.

“Wake saints…”: The Good News wasn’t just an offer to those outside the household of faith, but for those inside as well.  Of those supposedly in the faith Asbury once wrote that “The people are kind, and appear loving; but there is a great falling away; the devil has not been idle, and opposers have preached to them water (ed:  a reference to the Baptists), more than holiness; and have thus brought confusion among the Methodists”  (September 21, 1780).  On another occasion:  “In my own soul I feel happy, but on account of the Church of God, and poor sinners, awful. It appears as necessary to preach conviction and conversion among our own, as among other congregations. O! when will the Lord appear as in ancient times?” (August 21, 1796)  The Lord would appear—but He required, it would seem, “awakeners” of the circuit-riding variety.

“Wake sinners…”: Asbury was an undaunted confronter of the sinner and the unchurched.  He was legendary for his boldness and reveled in the change that could be brought with God’s help:  “The Lord hath done great things for these people…Men who neither feared God, nor regarded man—swearers, liars, cock-fighters, card-players, horse-racers, drunkards, &c., are now so changed as to become new men; and they are filled with the praises of God” (November 6, 1772).  For the modern preacher to know heaven-sent revival will mean that we take the “outcastes of men” as seriously as Asbury did.

“Wake seekers…”: The prevenient grace of God was on the march across the new nation and Asbury wanted to follow close behind. He noticed, however, that not everyone in the early Methodist efforts possessed his same fervor. “I find that the preachers have their friends in the cities, and care not to leave them. There is a strange party-spirit. For my part I desire to be faithful to God and man” (January 1, 1772). When preachers were willing to follow the Spirit’s preparatory work, surprising results at surprising times were possible.  “At Strasburg, in the afternoon, we had a solemn meeting; a young woman, who was married a few minutes before worship began, was powerfully struck under the word, and wept greatly.  O may she mourn until her second marriage takes place in her soul!” (July 3, 1792)

This vision for waking souls Asbury shared in a letter with a Thornton Fleming: “Oh, my brother, when all our quarterly meetings become campmeetings, and 1000 souls should be converted, our American millennium will begin.  And when the people in our towns and country assemble by thousands, and are converted by hundreds, night after night, what times!  Lord, increase our faith.  Nothing is too hard for him who made and redeemed a world”  (Charleston, South Carolina/November 7, 1806).

“Wake preachers, also…”: Typically, it was hoped that preachers not be considered barriers to Kingdom expansion. But in a letter to John Wesley, Asbury seemed to indicate that their spiritual lethargy might indeed be the obstacle to the laity catching fire.  “I see clearly that the Calvinists on one hand, and the Universilians on the other, very much retard the work of God…for they both appear to keep people from seeking heart religion” (West Jersey/September 20, 1783). Could it be that one of the labors of the contemporary pastor is the awakening of clergy of the same community?

“Now, if ever…”: A passion for igniting “heart religion” meant that the reputation of the Methodists would not be unlike that of Paul and Silas in Acts: “These men…have caused trouble all over the world…” (Acts 17:6).  Asbury wanted his preachers to shun relative peace if it meant a lack of progress. “At present a spirit of harmony subsisteth amongst our leaders; but I want to see them also deeply engaged to take the kingdom of heaven by violence”  (November 3, 1774).

His vision, like the passion that accompanied it, was immense and ever-expanding. In a letter to Thomas Coke he wrote, “I thought once, should I live to see preaching established in all the states, and one hundred in society in each of them, I should be satisfied. Now, I want millions where millions are” (Near Little York, Pennsylvania/July 28, 1803).

Passion, Francis Asbury-style, was the holy unction designed to set ablaze the evangelistic and disciple-making task in the pastor’s community, by any biblical means necessary. The cost was high but the salvation of souls was the reward, and the rapidly burgeoning movement of Methodism was the promise.

Learn more about Francis Asbury by reading directly from his journal and letters. Enjoy the fine work of this collection of personal writings, edited by Matt Friedeman. Get Swallowed Up in God: The Best of Francis Asbury’s Journal and Letters here.