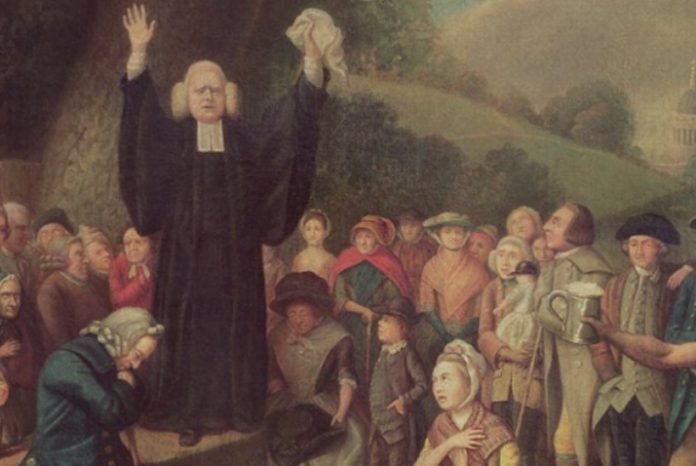 Christians have always wanted to know what it means for a life to be touched by grace. This is as true for Wesleyanism as it is for other Christian traditions. Wesleyan theology centres on the Christian life, and we have always been attentive to the witness of testimony to illuminate our own lives. Tales of faith and struggle come to invigorate our own experiences and reveal to us the possibilities of a life that is open—or closed!—to God’s grace. Some lives have been held up as examples of the faith—not necessarily because we imagine that we have witnessed in a particular life a perfect moral performance, but because we have seen a life that opens up to be completed in a way that it could never complete itself. This new volume of essays on George Whitefield offers such a vision of Christian life.

A contemporary of John Wesley’s, Whitefield was one of the foremost Methodist evangelists of the Great Awakening. It was Whitefield who convinced Wesley to try his hand at field preaching. Their relationship was mostly rich and robust, but also strained as a result of a theological disagreement: Whitefield was a Calvinist, Wesley was not.

A recent work, George Whitefield: Life, Context, and Legacy (Oxford University Press, 2016) has its genesis in David Ceri Jones’ 2012 annual lecture for the Manchester Wesley Research Centre, in which he called for the usual pictures of Whitefield—either as the saintly evangelist or the diabolical Calvinist Methodist—to be revisited and redressed. Jones’ lecture led to a conference commemorating the tercentenary of Whitefield’s birth, convened in Oxford in 2014 by Jones together with Geordan Hammond. They planted the seed of Jones’ lecture in the soil of the conference where it germinated and is now bearing fruit.

This is a very well-crafted volume. In fact, for an edited multi-author work, it exhibits an unusually smooth structure. The essays flow easily from one to the next to form a coherent whole, and together add up to a very captivating picture of Whitefield. This kalaidoscopic Whitefield is more complex and far more compelling than the one of Whitefield’s own construction, presented in his autobiographical journals. Here is a mosaic of Whitefield filled out with all the quirks of a human life.

Some of the descriptions of Whitefield’s life presented here are frankly profound: his attentiveness to the craft of preaching, his uncommonly active travel itinerary (totalling three full years spent at sea), his pastoral attentiveness to the forgotten people of the British Isles, and more. While Whitefield is often remembered as an ardent and evocative preacher, which he was, this volume illuminates also some of the more difficult aspects of his character. He was hopeless at relationships, falling out with his mother and unhappily married. Compounding this awkwardness was his sometimes overblown sense of divine favour coupled with an argumentative streak. Most uncomfortably, the volume exposes quite clearly Whitefield’s advocacy for a reformed, but not abolished, regime of slavery. The volume excels in putting forward all the pieces of Whitefield’s life, the admirable and the lamentable sitting side by side on the page.

As a theologian, I find myself drawn to these odd lives and the way that they shock us out of normalcy. All the presumptions of our own age and our own patterns of behaviour are rudely pulled to the surface as we contemplate the motivations and convictions and prejudices that compose the life of another. Questions arise in a theological reading of a work like this. Is Whitefield naive about the unmediated experience of divine revelation, or are we overly cynical? Is Whitefield’s rattling of the sabre at rationalists needlessly antagonistic, or are we too complacent when confronted with aberrant theology? Can anything of Whitefield be appropriated for the ecumenical church of today? These are familiar questions, but we need confrontations with figures who are as disquieting as Whitefield to require us to ask them anew.

A Life in Contrast

The volume speaks to us as Whitefield’s life contrasts with the reader’s. But his visage is also filled out in contrast with his contemporaries. Various essays contrast Whitefield with the Wesley brothers, with rationalists and latitudinarians, and with other Calvinists (especially the greatest American Calvinist, Jonathan Edwards). Compared to the Wesleys, he is a Calvinist. Compared to Edwards, he is an enthusiastic Methodist. Compared to the rationalists, he is overly affective. If the volume is intending to answer Jones’ call for a better understanding of Whitefield, these contrasts provide reason for many of Whitefield’s emphases and actions.

It might be that the final contrast occurs between the Whitefield we thought we knew with the Whitefield we discover when turning to the historical sources. We won’t understand our spiritual predecessors by overlooking their faults. If we would rather not see their faults, I wonder if we really want to know them at all. The lives of the christians of the past are of interest for their strangeness, and the way that they render our own lives strange. Here is a magnificent collection of scholarly essays that show that particular strangeness of Whitefield’s life. Whitefield’s life can only speak to us if it is a human life. How can we understand grace, if we have never allowed ourselves to see the gaps in nature? In these ways and many more, these scholarly essays on George Whitefield are—like their subject—strangely captivating and edifying.