The Glorious Imposition of the Cross - Seedbed
close
Menu 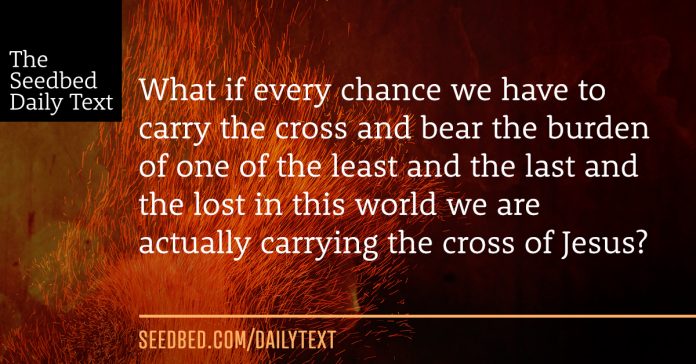 21 A certain man from Cyrene, Simon, the father of Alexander and Rufus, was passing by on his way in from the country, and they forced him to carry the cross. 22 They brought Jesus to the place called Golgotha (which means “the place of the skull”). 23 Then they offered him wine mixed with myrrh, but he did not take it. 24 And they crucified him. Dividing up his clothes, they cast lots to see what each would get.

25 It was nine in the morning when they crucified him. 26 The written notice of the charge against him read: the king of the jews.

Here was a man minding his own business, going about his day when he comes upon the unfortunate death march of a few common criminals. Rome always made a public spectacle of crucifixions as a way of keeping the citizenry in check; a way of signaling their imperial power.

He must have looked strong compared with others in the crowd. He probably had no idea who Jesus was. At least we know he didn’t volunteer to help. The text is careful to tell us “they forced him to carry the cross.” I suspect his clothes were stained with the blood of Jesus by the time he arrived at Golgotha. We don’t know where he was going that day. His day was another ordinary day, just like yesterday or today was for us. This event was not on his calendar. It was a violent interruption of his agenda. Imagine being forced to provide aid to a publicly condemned criminal. My money says Simon had no idea what was going on that day.

I imagine his family back home, waiting for him after he missed dinner and wondering what happened. This would not have been a “great story from my day” he told them. This was humiliating and shameful. He had been treated as a common criminal by the authorities. He was forced to stand in the stead of a convicted criminal. I wonder how Alexander and Rufus handled it when the word got around to their friends about their father being abused by the authorities. They probably felt shame by association.

It’s curious to me, why Mark would tell us the names of the sons of Simon from Cyrene when he allows the woman at Bethany to remain anonymous. This woman whose story Jesus said would accompany his all over the world remains unnamed while we know the names of the sons of the man forced to carry the cross of Jesus. I’ll bet they were ashamed of their father and what he had been forced to do.

Something tells me Rufus and Alexander became powerful heralds of the gospel. Something tells me their scornful shame transformed into significant status three days later when reports swept across the land that this so-called criminal, Jesus of Nazareth, had risen from the dead. Imagine their friends pointing across the way at Rufus and Alexander, whispering to another, “Their dad was the one who carried the cross of the man who was raised from the dead.”

There’s a subtle and ironic illustration of the great parable of the final judgment tucked in the folds of this story. You remember the one where Jesus said, “As you have done it unto the least of these my brethren, you have done it unto me?” Isn’t that precisely and quite literally Simon’s story? In carrying the cross of a condemned criminal he bore the burden of God.

The truth is, it’s our story too. What if every chance we have to carry the cross and bear the burden of one of the least and the last and the lost in this world we are actually carrying the cross of Jesus? It’s worth considering. It might even be a good thing if somewhere along the way it were somehow imposed on us. I’m trying to be open to that. How about you? Imagine how it changed the life and destiny of Rufus and Alexander. Imagine how it might gloriously change the life and destiny of our families. Talk about a legacy!

I can’t help but think that Rufus is that same Rufus Paul sent greetings to in his letter to the Romans when he wrote,

Spirit of the Living God, fall afresh on me. Lord Jesus, give me eyes to see those opportunities where I can take up the cross of another person—even if it is an imposition, maybe even because it is such. Melt me. Mold me. Fill me. Use me. For the glory of your name, Jesus. Amen.

Can you recall a time when carrying the cross of another was imposed on you—some hardship or struggle of someone else that was foisted upon you?

© Seedbed 2021
The Glorious Imposition of the Cross
MORE STORIES