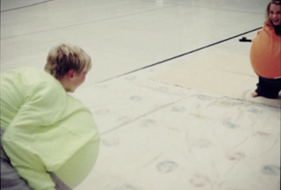 Everyone wants to be a sumo wrestler, right? But, who has the time for all the training and where do you even buy those uniforms? Don’t worry, we have a cheap and hilarious twist on sumo wrestling that will rock at your next youth meeting and will have you in hysterics!

Have two students compete at a time, tournament style. To start, each student competing needs to suit up, and then take a sumo stance on the opposite side of the circle from each other. On go, the wrestling begins. The object is to be the first to force your opponent out of the circle. This is basically achieved by pushing. This is not WWE style, clothes lining, hitting, etc. are clearly not allowed. The winning student competes against the next student and play continues until each student has completed. The final student in the ring is the winner.

We do a lot of crazy, over the top activities for our youth after parties, some of which require a lot of prep and set up. Sweat Suit Sumo was so simple to put together, and when we did it for the first time, I was not expecting it to be such a hit. The students had a blast and were in hysterics the entire game. Honestly, I laughed so hard that my abs hurt the next day. I had been slightly concerned about students getting aggressive during the matches, but that wasn’t an issue at all. I even had parents telling me the next day that I needed to repeat the activity again because their students couldn’t stop talking about it that night when they got home.