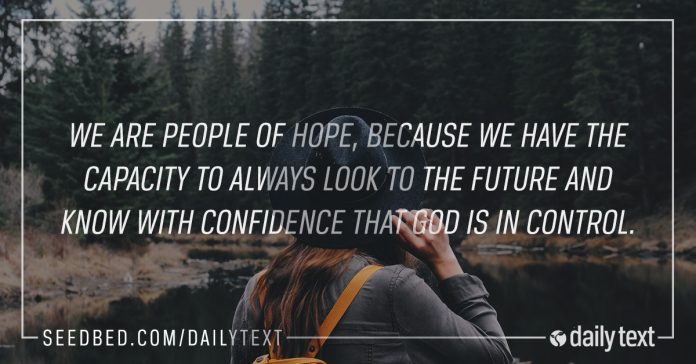 Praise be to the LORD my Rock,
who trains my hands for war,
my fingers for battle.
He is my loving God and my fortress,
my stronghold and my deliverer,
my shield, in whom I take refuge,
who subdues peoples under me.

LORD, what are human beings that you care for them,
mere mortals that you think of them?
They are like a breath;
their days are like a fleeting shadow.

Part your heavens, LORD, and come down;
touch the mountains, so that they smoke.
Send forth lightning and scatter the enemy;
shoot your arrows and rout them.
Reach down your hand from on high;
deliver me and rescue me
from the mighty waters,
from the hands of foreigners
whose mouths are full of lies,
whose right hands are deceitful.

I will sing a new song to you, my God;
on the ten-stringed lyre I will make music to you,
to the One who gives victory to kings,
who delivers his servant David.

From the deadly sword deliver me;
rescue me from the hands of foreigners
whose mouths are full of lies,
whose right hands are deceitful.

Then our sons in their youth
will be like well-nurtured plants,
and our daughters will be like pillars
carved to adorn a palace.
Our barns will be filled
with every kind of provision.
Our sheep will increase by thousands,
by tens of thousands in our fields;
our oxen will draw heavy loads.
There will be no breaching of walls,
no going into captivity,
no cry of distress in our streets.
Blessed is the people of whom this is true;
blessed is the people whose God is the LORD.

In Psalm 144, David opens with several phrases which we have already become familiar with in his earlier psalms. David opens by declaring that the LORD is his rock, his stronghold and his deliverer (144:1,2) which is how Psalm 18 begins (18:1,2). David prays: “O LORD, what is man that you care for him, the son of man that you think of him? (144:3) We are so familiar with this statement from Psalm 8:4. Finally, he acknowledges the brevity of life by declaring that “man is like a breath; his days are like a fleeting shadow,” a favorite theme in David’s songs (Ps. 39:5,11; 62:9).

Yet, in the midst of these familiar phrases, there is the more jolting opening praise: “Praise be to the LORD…who trains my hands for war, my fingers for battle” (vs. 1). Indeed, even God is portrayed as “coming down” to join in the battle, and making war on David’s enemies (vv. 5-11). How do we as Christians read and understand such passages?

First, we must recognize that David is drawing from the rich imagery of Israelite history. There is no greater example of God “coming down” to meet with his people, reveal himself to them, and to enter into covenant with them than God’s descent onto Mount Sinai recorded in Exodus 19. David actually sees God’s descent on Mt. Sinai where he gave the Ten Commandments a form of doing battle. Drawing on the rich biblical imagery describing Mt. Sinai, David calls on God to do it again: “Part your heavens, O LORD, and come down; touch the mountains, so that they smoke. Send forth lightning…reach down your hand from on high; deliver me and rescue me…” (144:5-7).

What David could only know in part, we know now in full. David not only looks back to the glories of God’s descent on Mt. Sinai, but he prophetically looks forward to God’s greater descent through the incarnation of Jesus Christ! That is truly the great parting of the heavens, which allows God and Man to meet, in a way only vaguely anticipated at Sinai. The incarnation is God’s greatest revelation. Mt. Sinai gave us the Ten Commandments, but the incarnation gave us the full revelation of God’s glory (Col.2:9). Mt. Sinai marked the inauguration of the Old Covenant; the incarnation marks the inauguration of the New Covenant, not written on tablets of stone, but on the tablets of human hearts (2 Cor. 3:3). And Mark, in his gospel account of Jesus’ baptism, invokes the very language of Psalm 144:5: “As Jesus was coming up out of the water, he saw heaven being torn open and the Spirit descending on him like a dove” (Mark 1:10).

The Bible does not shy away from using battle imagery to describe God’s powerful, intervening work in the world. God comes down to make war against the forces of evil arrayed against his rule and reign. God comes down to do battle against all the plans of the Evil One which have been cruelly foisted upon the world.

We must never forget that the cross of Jesus Christ was the greatest battle, as God, in Christ waged war against the forces of darkness and “disarmed the powers and authorities,” making a “public spectacle of them triumphing over them by the cross” (Col. 2:15). The cross of Jesus was the greatest battle which inaugurated the Kingdom of God. But that which was inaugurated at the cross, will be consummated in a series of final battles at the climax of the ages. Indeed, the book of Revelation makes it clear that the ushering in of the final consummation of the New Creation involves a series of great, apocalyptic battles (See, Rev. 8-20). This is the climax of how God “repairs the world” and sets things right.

Psalm 144 concludes in a way which leaves us with no doubt that it is proper to see this psalm as not merely “looking back” but “yearning forward” to what lies ahead, even for us. The psalmist envisions God’s “coming down” as a day when peace and prosperity will engulf the people of God. The language is extravagant in its hopefulness: “Our barns will be filled with every kind of provision. Our sheep will increase by thousands, by tens of thousands in our field… there will be no breaching of walls…no cry of distress in our streets” (vv. 12-14).
This vision will ultimately find its fulfillment in the New Creation, when there will be a “new heaven and a new earth.” He will “wipe every tear” from our eyes. “There will be no more death or mourning or crying or pain, for the old order of things has passed away” (Rev. 21:1-4).

This is why, despite whatever we go through in this life, the people of God are always people of hope. This is why even our laments are songs of hope. We are people of hope, because we have the capacity to always look to the future and know with confidence that God is in control and he will someday set all things right.