Does God Have a Reason for Everything? Wrong Question! - Seedbed
close
Menu 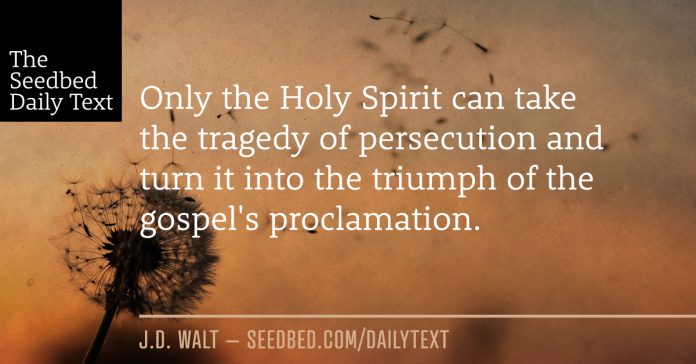 Those who had been scattered preached the word wherever they went. Philip went down to a city in Samaria and proclaimed the Messiah there. When the crowds heard Philip and saw the signs he performed, they all paid close attention to what he said. For with shrieks, impure spirits came out of many, and many who were paralyzed or lame were healed. So there was great joy in that city.

Did you miss it in yesterday’s Daily Text? Following the martyrdom of Stephen, we are told by Luke that, “a great persecution broke out against the church in Jerusalem.” Another translation has it as a “severe” persecution. Let’s not pass over that too quickly: a severe persecution. That’s bad stuff; really bad. It means the systematic extermination of the Church. People are generally given two choices: recant or die. Sometimes they were given some time behind bars to think it over. Though we are not told, we can be sure that many followers of The Way, as they were first called, voluntarily went to their deaths rather than deny the Lord.

Logic tells us this would mean the failure of the gospel. There weren’t but a few thousand of them at most. Surely they would get the message. How could it be worth it? And how would this thing last? They would scatter to the wind and it would be over as fast as it began. Severe persecution, however, turns out not to be the gospel’s failure but its frontier. They scattered alright, with the powerful wind of the Holy Spirit at their backs. Today’s text tells us they “preached the word everywhere they went.”

Only the Holy Spirit can take the tragedy of persecution and turn it into the triumph of the gospel’s proclamation. That’s how God works. The chief persecutor himself would later put it this way, “And we know that in all things God works for the good of those who love him, who have been called according to his purpose.” (Romans 8:28)

Do you love God? If so, no matter what you are going through, no matter how desperate, dark or awful it may be, God is with you in the midst of it and he is working for your good and to the end of his purposes.

So much energy gets expended in defending the sovereignty of God and how God either caused something bad to happen or allowed it to happen because he has a reason for everything. It’s the wrong conversation. Instead of searching for God’s reason we must discern how God will turn the tragedy into a triumph.

The purpose of God is the gospel, from Jerusalem to Judea to Samaria and away to the ends of the Earth. Persecution is anything that comes against the gospel, from crucifixion to cancer to jihad. God takes severe persecution and turns it into the spread of gospel proclamation. To suggest that God wills the persecution of his own people is an absurdity. To be confident God is at work for good in the midst of the most tragic situations according to his purposes to overthrow the powers, principalities, rulers and authorities is the gospel itself. The cross proves the ultimate case study. Believe it! Never give up!

Remember Philip? He was another one of those guys chosen to help with the widows in Jerusalem. We will get to him tomorrow.

Do you tend toward thinking God has a reason for tragedy or do you look more for God’s redemption in the midst of tragedy? See the difference?