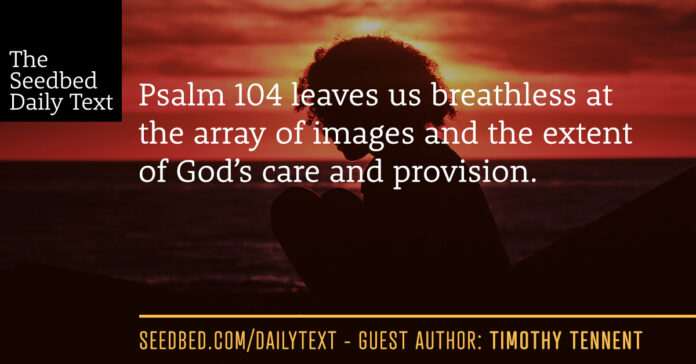 Merry Christmas Sowers! I will be taking a few days off from the Daily Text. Welcome Dr. Timothy Tennent (my boss) for the next few days with reflections from several celebratory Psalms fitting for the season. I’ll be back January 1 with a reprise of our most popular series ever: First Word. Last Word. God’s Word.—to take us through January. Speaking of which, I have a New Year’s Sowing Challenge with a REWARD for you to consider.

1 Praise the Lord, my soul.

Lord my God, you are very great;
you are clothed with splendor and majesty.

2 The Lord wraps himself in light as with a garment;
he stretches out the heavens like a tent
3     and lays the beams of his upper chambers on their waters.
He makes the clouds his chariot
and rides on the wings of the wind.
4 He makes winds his messengers,
flames of fire his servants.

5 He set the earth on its foundations;
it can never be moved.
6 You covered it with the watery depths as with a garment;
the waters stood above the mountains.
7 But at your rebuke the waters fled,
at the sound of your thunder they took to flight;
8 they flowed over the mountains,
they went down into the valleys,
to the place you assigned for them.
9 You set a boundary they cannot cross;
never again will they cover the earth.

31 May the glory of the Lord endure forever;
may the Lord rejoice in his works—
32 he who looks at the earth, and it trembles,
who touches the mountains, and they smoke.

33 I will sing to the Lord all my life;
I will sing praise to my God as long as I live.
34 May my meditation be pleasing to him,
as I rejoice in the Lord.
35 But may sinners vanish from the earth
and the wicked be no more.

Praise the Lord, my soul.

This is a beautiful creation psalm that draws upon an array of beautiful images to portray the grandeur of God’s mighty acts as the Creator of the universe. It is one thing to affirm the doctrine that God is the Creator; it is quite another to celebrate this truth through a magnificent act of worship, as this psalm does.

The majestic phrases simply gush forth like a mighty stream to the reader: “He wraps himself in light as with a garment” (v. 2). “He stretches out the heavens like a tent” (v. 2). “He makes the clouds his chariot and rides on the wings of the wind” (v. 3). On and on the images come, surveying all of creation, from the birds of the air to the mountains to the rivers; from the starry hosts to the sun and the moon. The grandeur unfolds in rapid, almost breathtaking succession. Even humanity is portrayed as just one of the many luminaries of creation. The wild goat on the mountain, the lion in his den, and men and women laboring in their fields are all images that pour out of this psalm.

Donkeys, goats, lions, badgers, men, and the teeming creatures of the sea all reflect the grandeur of his creation. It is one thing to know and affirm this doctrine, but it is another to enter into a journey whereby we celebrate it in such vivid detail. We are left breathless at the array of images and the extent of God’s care and provision. We must recover a robust doctrine of God as the Creator of the world. When the Apostles’ Creed opens by saying “We believe in God the Father Almighty, Creator of heaven and earth” (italics added), this is an article of faith that ranks in importance with the other great affirmations of the faith, such as the resurrection of Christ or our belief in the forgiveness of sins. Praise God that he is the Creator of the world!