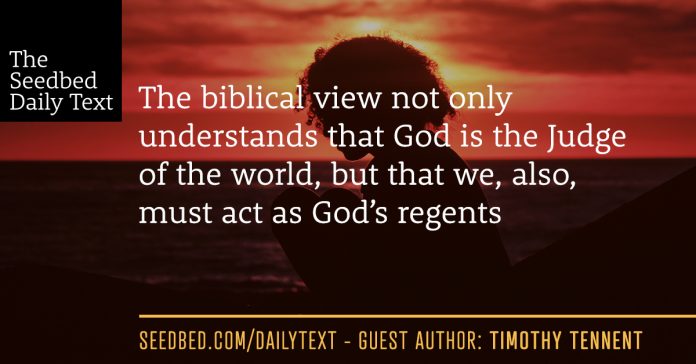 1 God presides in the great assembly;
he renders judgment among the “gods”:

5 “The ‘gods’ know nothing, they understand nothing.
They walk about in darkness;
all the foundations of the earth are shaken.

6 “I said, ‘You are “gods”;
you are all sons of the Most High.’
7 But you will die like mere mortals;
you will fall like every other ruler.”

8 Rise up, O God, judge the earth,
for all the nations are your inheritance.

This is one of a number of the psalms of Asaph that portray God as the great Judge of all the earth. The remarkable insight of this psalm is that all judges in the world derive their authority from God as the final Judge of the human race. Therefore, every judge in the world is a small-g god, according to Psalms 82:1. We make a grave mistake when we either reject that there is a final Judge of the world, or when we fail to see the integral connection between earthly judges and the Judge of all the earth. The psalm rebukes earthly judges when they “show partiality to the wicked” (v. 2) or fail to “defend the cause of the weak and fatherless” (v. 3). If earthly judges do not recognize that they are acting as God’s regents or representatives on earth, then they will “die like mere men” (v. 7).

This psalm is an important reminder to us all that, even if we are not formally a judge, we are still called to represent God and render judgments on countless things that come up in the course of our lives. It is important that we do so with a solemnity and a reverence, knowing that whatever we do will ultimately be tested by God’s righteousness and holiness. Jesus drew our attention to this psalm during one of his disputes with the religious authorities of his day who were rejecting him. They were scandalized that Jesus would “claim to be God” (John 10:33). Jesus reversed their argument on them by quoting Psalm 82, “Is it not written in your Law, ‘I have said that you are gods’?” (John 10:34; see Ps. 82:6). He reminds them (and us) that as image-bearers in the world we are called in various ways to reflect God’s righteousness in the world.

This psalm (and its quotation by Jesus in the New Testament) provides a very important corrective to two erroneous tendencies. The first is the atheistic naturalistic tendency, which denies that there is a God who judges the world. The second error is found in both deism and Islam, where God is so removed from his creation, his creatures cannot reflect his attributes. The biblical view not only understands that God is the Judge of the world, but that we, also, must act as God’s regents, his ambassadors, or, to use the language of this psalm, as “gods” in the world. Jesus, of course, goes on to say that if such a title can be applied to ordinary men and women as ourselves, then how much more so should the title God (capital G) be applied to Jesus Christ, “whom the Father set apart as his very own and sent into the world” (John 10:36).