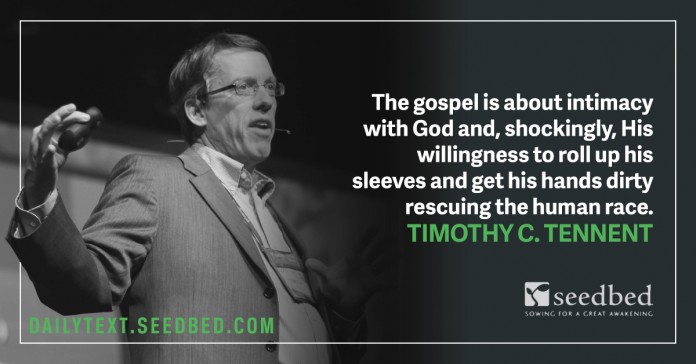 Then Jesus left the vicinity of Tyre and went through Sidon, down to the Sea of Galilee and into the region of the Decapolis. There some people brought to him a man who was deaf and could hardly talk, and they begged Jesus to place his hand on him.

After he took him aside, away from the crowd, Jesus put his fingers into the man’s ears. Then he spit and touched the man’s tongue. He looked up to heaven and with a deep sigh said to him, “Ephphatha!” (which means “Be opened!”).

At this, the man’s ears were opened, his tongue was loosened and he began to speak plainly.

Jesus commanded them not to tell anyone. But the more he did so, the more they kept talking about it. People were overwhelmed with amazement. “He has done everything well,” they said. “He even makes the deaf hear and the mute speak.”

One of the many things which would surprise you if you were suddenly transported into the ancient world would be the presence of handicaps and deformities which were much more common and “public” in the first century. Here, we find a “deaf-mute” man brought to Jesus. He was functionally mute, though he could make sounds, and he was completely deaf. Jesus took this man aside, away from the crowd. This is one of only a few times in the Bible where Jesus heals someone in a private setting. This is an intimate setting. Jesus then does something quite unusual. He puts his fingers into the man’s ears, then he took some spittle from his mouth and used it to touch the man’s tongue. He then looks up to heaven and sighs deeply.

Why did Jesus stick his fingers in the man’s ears? Why did Jesus put spit on his finger and touch the man’s tongue? After all, Jesus did not need to touch this man at all. He could have just spoken the word and the man would have been healed. Why this? We probably won’t know for sure until we get to heaven why Jesus healed people in such different ways during his ministry, but I am convinced that it has something to do with the very nature of the incarnation. Because if you ask these questions—why did Jesus stick his fingers into the man’s ears or put spittle on his finger and touch his tongue—then, by extension, couldn’t you ask the larger question about Jesus’ whole presence on earth? Why was Jesus born into a despised race of an occupied people who were discriminated against and dominated by the Romans? Could not have God saved us from a distance? Couldn’t Christianity have been more like Islam where God merely sends his messenger Gabriel down to deliver the message of salvation without God getting sullied by our condition?

Paul spoke the truth when he said that the cross was the great stumbling block of the Christian faith. The Son of God was nailed to a cross. God allowed Himself to be exposed to weakness and suffering—even death on a cross. I think this rather obscure account in Mark’s gospel points us in the right direction toward a solution to all these questions. Anselm, in the Middle Ages, wrote a famous little book, Cur Deus Homo? Why did God become a man? You could ask the question a thousand ways. Why was God born in a stable? Why did God touch the leper? Why did God talk to the woman at the well? Why did God put his fingers in the deaf man’s ears and put spittle on his tongue?

It has to do with the very nature of God. You see, the great distinctiveness of the Christian faith is that God has drawn near to us in the person of Jesus Christ. The gospel is about intimacy with God and, shockingly, His willingness to roll up his sleeves and get his hands dirty rescuing the human race. The Gospel does not point us to the abstract God of the philosophers. We are not peeking in on Aristotle’s “Unmoved Mover.” We are seeing God in the flesh. In the touching of the blind and deaf man, we are learning something about what God is like in his very inner nature. And in the process, we should be challenged to the core about what it means to be called a Christian. It is about God drawing near and touching us in our brokenness and our responding by going into the world and doing likewise. God was willing to get his fingers dirty in this world. Those who first saw this miracle exclaimed, “He does everything well!” How truly they spoke. For any God who would come down off of His throne in heaven, enter into the frailty of human flesh, walk on this planet, and stick his fingers into the ears of a blind-deaf man—any God who will do that—He can do all things well. Thanks be to God!

1. Is there someone who is “deaf-mute” to the gospel of Jesus Christ in your life? Can you find a way to get your hands dirty showing them the love of God?
2. How can the church better reflect the amazing truth that we serve a God who became incarnate in Jesus Christ and walked among us?