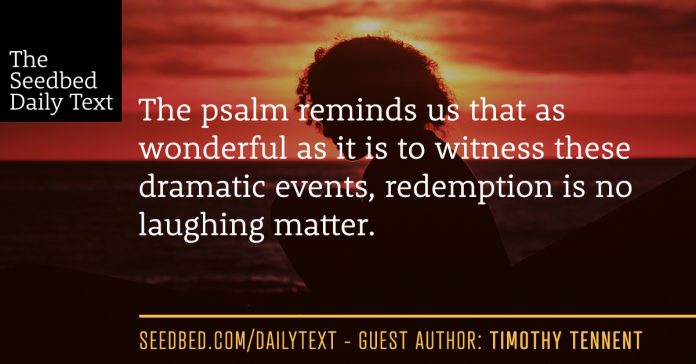 1 When Israel came out of Egypt,
Jacob from a people of foreign tongue,
2 Judah became God’s sanctuary,
Israel his dominion.

3 The sea looked and fled,
the Jordan turned back;
4 the mountains leaped like rams,
the hills like lambs.

5 Why was it, sea, that you fled?
Why, Jordan, did you turn back?
6 Why, mountains, did you leap like rams,
you hills, like lambs?

Psalm 114 is an eruption of joyful exuberance ­celebrating the miraculous exodus from Egypt, the giving of the law at Sinai, and the eventual victorious entry into the Promised Land. Because this psalm is so condensed, and even playful, in its construction, it might be easy to miss the scope of what is being celebrated, as well as the deep theological truths that undergird this song.

The psalm opens by interpreting the exodus from Egypt as not merely a geographic move from Egypt to Palestine, but a powerful declaration of the transference of their identity from being slaves in Egypt to being the very dwelling place or habitation of God himself. This is the great message of the psalm. Israel has become the very dwelling place of God’s presence. The exodus, Mount Sinai, and the Promised Land are the signposts, or the historical proof of this glorious new identity: “When Israel came out of Egypt, the house of Jacob from a people of foreign tongue, Judah became God’s sanctuary, Israel his dominion” (vv. 1–2). Then, capturing the sheer joy of God’s redemption, the three most important events in their history are collapsed into a few verses: “The sea looked and fled” (v. 3), recalling their passing through the Red Sea on dry ground in Exodus 14; “the Jordan turned back” (v. 3), recalling the way the Jordan parted in Joshua 3 as a new generation entered the Promised Land; and “the mountains skipped like rams, the hills like lambs” (v. 4), recalling the powerful earthquake on Mount Sinai when God descended to give Moses the Ten Commandments in Exodus 19. Those who were eyewitnesses of the event recalled not only lighting, thunder, fire, and smoke, but also reported that “the whole mountain trembled violently” (Exod. 19:18). These three acts of redemption are all, in the poetry of this psalm, rolled into a single event. This is much like what would happen in later Christian hymns that celebrated the cross, resurrection, and ascension of Christ in a single act of worship in order to emphasize that God is the source of all human redemption.

The psalm, with a joyful, poetic flourish, goes on to playfully tease the Red Sea, the Jordan Sea, and the mountains, asking them each one by one why they fled, parted, and shook. The point is to show how there is no greater force or power in the world than the presence of God. When God, the Creator and Redeemer, shows up, even the mountains quake, the seas part, and the rivers turn back from their course!

The joyful, playful tone of the psalm suddenly turns solemn in verses 7 and 8. The psalm reminds us that as wonderful as it is to witness these dramatic events, redemption is no laughing matter. The psalm then turns to a solemn warning to the unbelieving world: