If I Were Going to Get a Tattoo It Would Say . . . - Seedbed
close
Menu 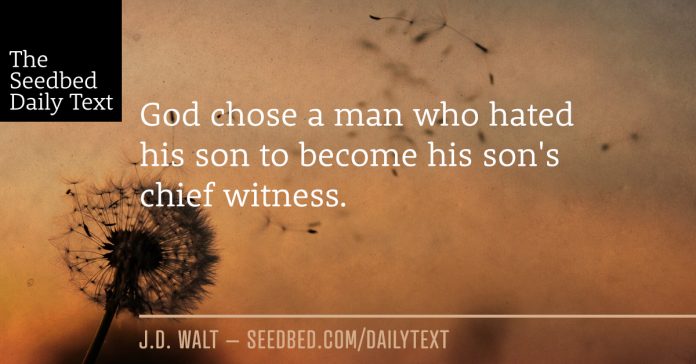 “‘Get up,’ the Lord said, ‘and go into Damascus. There you will be told all that you have been assigned to do.’ My companions led me by the hand into Damascus, because the brilliance of the light had blinded me.“A man named Ananias came to see me. He was a devout observer of the law and highly respected by all the Jews living there. He stood beside me and said, ‘Brother Saul, receive your sight!’ And at that very moment I was able to see him.“Then he said: ‘The God of our ancestors has chosen you to know his will and to see the Righteous One and to hear words from his mouth. You will be his witness to all people of what you have seen and heard. And now what are you waiting for? Get up, be baptized and wash your sins away, calling on his name.’

his must be one of the most shocking, unlikely stories in all of Scripture. God chose a religious terrorist to be one of the single most important people in the history of the world. God chose a man who hated his son to become his son’s chief witness. Had Paul been in Jerusalem at the time of Jesus’ crucifixion he would have been at the head of the parade.

Paul is doing his dead level best to let this angry mob know that he was one of them. He did not have to become a Jew to the Jews. He was a Jew’s Jew. He would have been recognized as a rising star in the movement, a shoe-in candidate for High Priest one day. Something so unbelievably impossible happened to Paul that to call it a reversal of course would be ridiculous.

When I think about Paul, a particular phrase comes to mind. It’s a declaration that appears throughout the Bible. It may be one of the most important declarations to get out of the text and written on our hearts and minds. From Abraham and Sarah’s angelic visitors to Jeremiah to Mary to Jesus and on, the declaration rings all the way back to the creation of the world and all the way forward to the present day.

We should create a secret society and forge rings, inscribing this declaration on the inside. Anyone who could witness to the truth of the declaration could join. We need to collect the stories that tell this truth and tell them to one another over and over and over again.

You are wondering what the declaration is, aren’t you? I’m praying it will hit you with fresh force as you read it below.

Ok, here it is: Nothing is impossible with God.

Say it out loud now. Nothing is impossible with God. Do whatever it takes to get this phrase into the vernacular of your every day life. It is the genetic code of faith. Get in the habit of writing it down anywhere and everywhere. Doodle it. If you are a singer, sing it. Meditate on this declaration when you rise in the morning and when you lie down at night.

If I were going to get a tattoo, this is what it would say:

Nothing is impossible with God.

Thanks, Paul, for the reminder.

What situation have you faced or are you facing or are you aware of that seems impossible with God?