Google Earth and the Will of God - Seedbed
close
Menu 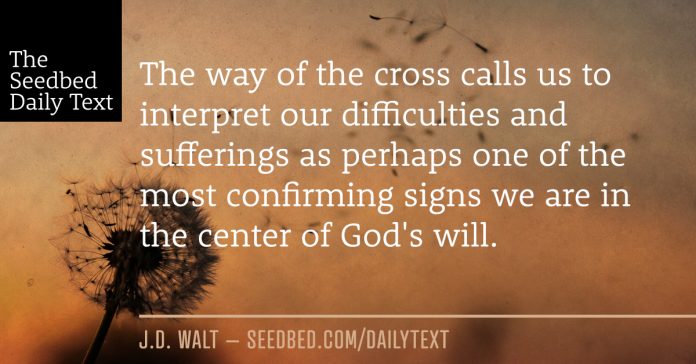 Then Paul made his defense: “I have done nothing wrong against the Jewish law or against the temple or against Caesar.”Festus, wishing to do the Jews a favor, said to Paul, “Are you willing to go up to Jerusalem and stand trial before me there on these charges?”Paul answered: “I am now standing before Caesar’s court, where I ought to be tried. I have not done any wrong to the Jews, as you yourself know very well. If, however, I am guilty of doing anything deserving death, I do not refuse to die. But if the charges brought against me by these Jews are not true, no one has the right to hand me over to them. I appeal to Caesar!”After Festus had conferred with his council, he declared: “You have appealed to Caesar. To Caesar you will go!”

The other day I was on Google Maps looking for my house on satellite view. As soon as I saw my location via the GPS dot, I began zooming down. I went down far enough to see that the yard needed mowing at the time the image was captured. After looking around my back yard and a few of the neighbors’ I began zooming back up. I’ve only lived in my present home for six months, so I wanted to see where I was with respect to the rest of the city of Franklin, then Williamson County, then Nashville, Memphis, Birmingham, then Tennessee, then Kentucky . . . and you get my point. (with Google Earth, you can take a trip and never leave the farm!)

The further I zoomed out the more I understood where everything else was which helped me better understand where I lived. I find this practice to be essential on a regular basis when reading the Bible. I call it “Zooming Out.” Were we to zoom out on today’s text we would first locate ourselves at Caesarea, on the coast of the Mediterranean Sea. Zooming out a bit we would see Jerusalem to the northeast. Further out we would see Turkey to our north and Athens to our West. Further still we would see Rome, the place where Paul will soon be headed.

The physical geography alone is fascinating. Then there’s the geography of the will of God; the cartography of the Holy Spirit. Just as zooming out on physical geography gives us perspective, so does zooming out on our present set of circumstances and challenges. As we zoom out on Paul we see his life completely out of his control. He is caught in the swirling chaos between the courts of the Sanhedrin and courts of Caesar. Paul seems to be sidelined, riddled with problems and surrounded by enemies. He’s completely stuck.

Here’s the surprise. Despite his challenges and desperate circumstance, Paul remains in the center of the will of God. The Holy Spirit is working out the movement of the gospel and not wasting a millisecond of Paul’s time. Jesus, who called Paul, was not caught off guard by these kangaroo court proceedings. Jesus was not sitting at the right hand of the Father wringing his hands and scratching his head wondering what to do next. No, he was working out the will of God right in the middle of Paul’s disastrous dilemma.

Christian, I want you to remember that. No matter how desperate or dire the situation you find yourself in, look to Jesus. Call out to the Holy Spirit, and rest in the refuge of Abba Father. No matter how conflicted and chaotic your circumstances, do not be anxious. Wait on him. Rest assured. He sees you. He knows your apparently unsolvable problem, and he is committed to working mercifully in the midst of it; not from a distance but by your side.  He is bringing it and you to a good end.

Be it a badly broken marriage, a wayward son or daughter, the endless, thankless labor of caring for an aging parent with Alzheimer’s, the loss of a job, the collapse of best laid plans, we must take the time to “Zoom Out.”

In the midst of the hardships and trouble and chaos of life, it’s easy to start thinking we’ve stepped outside of the will of God. We’ve done something to merit the problems before us. On the other hand it’s easy to push the button and just claim the randomness and meaninglessness of it all. The way of the cross calls us to interpret our difficulties and sufferings as perhaps one of the most confirming signs we are in the center of God’s will.

Most of the time it takes regularly “Zooming Out,” to see it.

Of three things I have become brazenly certain: 1. In this world we will have trouble. See John 16:33 2. We can take heart because Jesus has overcome the world. 3. The way forward is made by the perseverance of the Holy Spirit to manifest the suffering love of Jesus to us and in us and through us. See Colossians 1:24.

Are you personally encouraged by today’s Daily Text? Do you Know someone who needs this kind of encouragement today? Send it on with your love.

© Seedbed 2021
Google Earth and the Will of God
MORE STORIES