The Gospel According to Jeffrey Dahmer - Seedbed
close
Menu 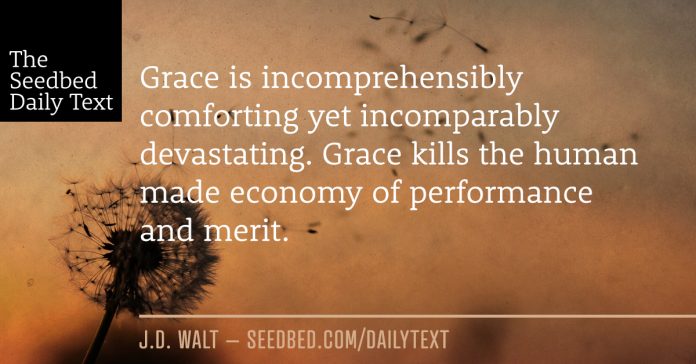 When he came to Jerusalem, he tried to join the disciples, but they were all afraid of him, not believing that he really was a disciple. But Barnabas took him and brought him to the apostles. He told them how Saul on his journey had seen the Lord and that the Lord had spoken to him, and how in Damascus he had preached fearlessly in the name of Jesus. So Saul stayed with them and moved about freely in Jerusalem, speaking boldly in the name of the Lord.He talked and debated with the Hellenistic Jews, but they tried to kill him. When the believers learned of this, they took him down to Caesarea and sent him off to Tarsus.Then the church throughout Judea, Galilee and Samaria enjoyed a time of peace and was strengthened. Living in the fear of the Lord and encouraged by the Holy Spirit, it increased in numbers.

Saul, the ultimate insider in Jerusalem now finds himself as the most despised outsider. He is in no man’s land. The Christians were afraid of him and the Jews wanted to kill him.

Paul tested the limits of grace for the early Church like no other. Back to our analogy, imagine had Osama Bin Laden become a Christian and showed up in a local church in New York City where many of the family members of the 9.11 tragedy worshipped. How might those people feel about the former terrorist?

It reminds me of the story of Jeffrey Dahmer, the child-molesting, cannibalistic, sex offender, serial killer responsible for raping, murdering, dismembering, and consuming 17 men and boys. After his arrest and conviction he had, by all accounts, an authentic conversion to Christianity. At one point he asked his pastor if repentance for him meant ceasing to live. Soon thereafter he was murdered in prison.

My problem is I think Saul of Tarsus and Jeffrey Dahmer and others of their ilk test the limits of grace and that somehow I don’t. Grace is incomprehensibly comforting yet incomparably devastating. Grace kills the human made economy of performance and merit. Grace breaks down every good thought (and every bad thought) I have about myself and replaces them with God’s good thought about me alone. He does the same for Jeffrey Dahmer and Saul of Tarsus. In and of myself, I bring before Almighty God the same merit that they do—which is none.

If I can enter on these terms, I will receive the very same gift they do, which is everything. If I can’t exchange my nothing for God’s everything, just like everybody else, Jesus may as well be speaking to me when he says, “Truly I tell you, the tax collectors and the prostitutes are entering the kingdom of God ahead of you.” (Matthew 21:31)

When we live in that place of humble honesty and extraordinary gladness we can be like Barnabas, a “door-opener” for others. Until then, we slam the door in Jesus’ face.

The “Chief of Sinners,” Paul called himself. Why not me? Why not you?

Do you find the grace of God in Jesus Christ offensive? Why? Or why not?