When the Gospel Goes to Vegas - Seedbed
close
Menu 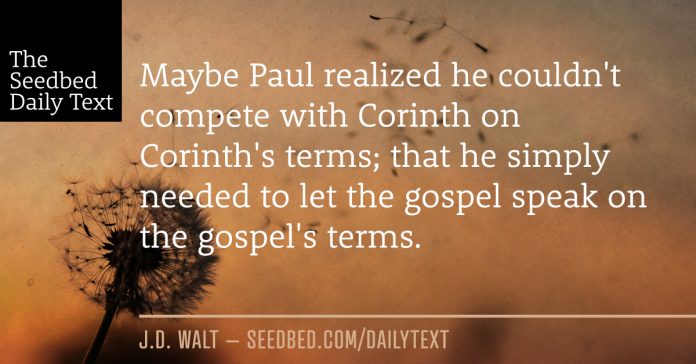 After this, Paul left Athens and went to Corinth. There he met a Jew named Aquila, a native of Pontus, who had recently come from Italy with his wife Priscilla, because Claudius had ordered all Jews to leave Rome. Paul went to see them, and because he was a tentmaker as they were, he stayed and worked with them. Every Sabbath he reasoned in the synagogue, trying to persuade Jews and Greeks.

Had anyone sung, “I want to wake up in the city that never sleeps” in the middle of the first century they would be singing of Corinth. A city of perhaps 100,000 souls, the Roman Colony Corinth sat at the crossroads of the Mediterranean world. In modern terms, Corinth feels to me like Los Angeles with a strong dose of Vegas thrown in. A port city, Corinth served as a major hub for the slave trade.

The city was known as a place of sexual escapade. In the ancient world, to “Corinthianize” meant to engage in sexual immorality. Looking for cheap labor? Go to Corinth. Looking for the ancient equivalent of SportsCenter? Find it in Corinth. Sintertainment? Can we say that what happened in Corinth . . .

This is the place Paul decided to know nothing except Jesus Christ and him crucified.

This is the place Paul knew only a “demonstration of the Spirit’s power” would get it done.

Maybe Paul realized he couldn’t compete with Corinth on Corinth’s terms; that he simply needed to let the gospel speak on the gospel’s terms.

And what’s this about Paul getting a job making tents? People always talk about this “bi-vocational” approach Paul took in financial categories– like Paul needed to have a second job because the church couldn’t pay him enough at the beginning.

My take? I don’t think it had anything to do with money. I think it was a calculated strategy to enter the Corinthian context under deep cover. You know, bonafide apostolic mojo.

When is the last time you saw or experienced a “demonstration of the Spirit’s power?” Would love to hear.