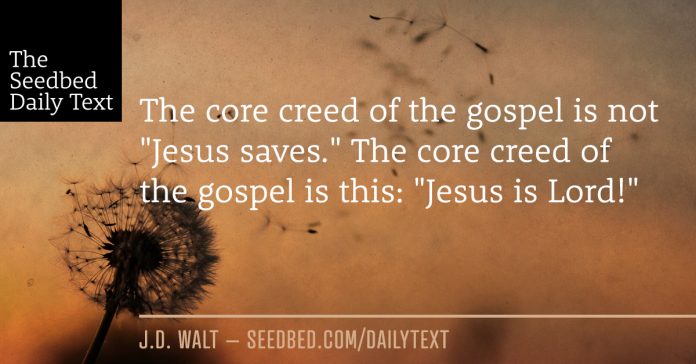 After all this had happened, Paul decided to go to Jerusalem, passing through Macedonia and Achaia.“After I have been there,” he said, “I must visit Rome also.” He sent two of his helpers, Timothy and Erastus, to Macedonia, while he stayed in the province of Asia a little longer.About that time there arose a great disturbance about the Way. A silversmith named Demetrius, who made silver shrines of Artemis, brought in a lot of business for the craftsmen there. He called them together, along with the workers in related trades, and said: “You know, my friends, that we receive a good income from this business. And you see and hear how this fellow Paul has convinced and led astray large numbers of people here in Ephesus and in practically the whole province of Asia. He says that gods made by human hands are no gods at all. There is danger not only that our trade will lose its good name, but also that the temple of the great goddess Artemis will be discredited; and the goddess herself, who is worshiped throughout the province of Asia and the world, will be robbed of her divine majesty.”

The gospel is offensive. The gospel offers very good news to those who believe and follow in the Way, but it portends doom for those who fight against it.

In today’s text, the gospel threatens to unravel an entire city’s economy and in its place plant the Kingdom of God. How? The city of Ephesus organized its economy around the “great goddess Artemis.” People came from far and wide to visit the temple of Artemis, one of the Seven Wonders of the Ancient World. The twin sister of Apollo, Artemis supposedly offered blessings of fertility and healing. Patrons and pilgrims would often purchase small silver shrines and images of the goddess to take home with them and, likely, a host of other items from the local craftsmen. It was a booming business.

Enter the gospel of the Lord Jesus Christ. The gospel can’t be content to be a player in the game alongside other gods. No, the gospel will not rest until the so-called other gods are exposed as “no gods at all.” I don’t think Paul spends much time defending the gospel against Artemis. Nope. He goes straight for the jugular, exposing the lie at the center of the whole system that made the city work.

If you have two minutes for something funny that makes the point, check this one out (you’re welcome!)

This is an exclusive claim and quite offensive for those who have enthroned other so-called gods as Lord. It upends everything.

With Jesus it really is all or nothing. Yes, he recognizes that “all” can take awhile to get to, but if we are not actively going in that direction we can be sure that our life will amount to nothing. It’s a guarantee. It’s why false gods, despite the fact that they are “no gods at all” are the most dangerous thing on the planet.

Has the truth of “Jesus is Lord” upended anything in your life? Or have you slid Jesus into a comfortable place on the mantle alongside the pantheon of other gods we salute?