How the Gospel Solves Your Problems—Eventually - Seedbed
close
Menu 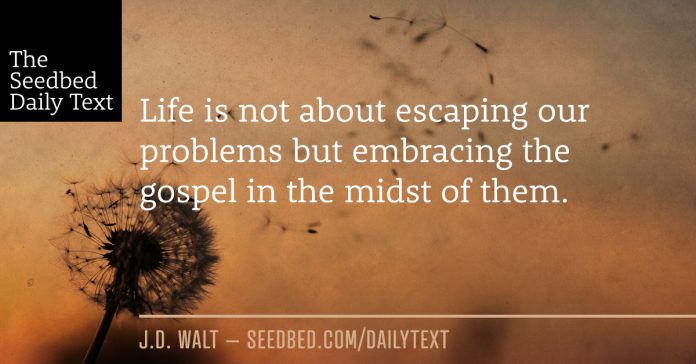 When her owners realized that their hope of making money was gone, they seized Paul and Silas and dragged them into the marketplace to face the authorities. They brought them before the magistrates and said, “These men are Jews, and are throwing our city into an uproar by advocating customs unlawful for us Romans to accept or practice.”

The crowd joined in the attack against Paul and Silas, and the magistrates ordered them to be stripped and beaten with rods. After they had been severely flogged, they were thrown into prison, and the jailer was commanded to guard them carefully. When he received these orders, he put them in the inner cell and fastened their feet in the stocks.

Previously on CHURCH: As Paul and Silas ministered in Philippi, a fortune teller who was both a woman and a slave began following them and crying out like a herald, “These men are servants of the most high God who are telling you the way to be saved!” After this went on for several days, Paul became visibly annoyed and cast an evil spirit out of her, and at once she was free.

Now here’s an example of how the gospel works at times. Paul, by the power of the Holy Spirit, set this woman free from the bondage of an evil spirit. At the same time, this good news for her was in another way bad news. She lost her value to her slave owners. What that meant for her we do not know. Though it was surely worth it for her, it created another set of problems for her.

That’s a lesson in and of itself. In solving one problem, the gospel will often create another problem. As I have noted before, grace can create a very disruptive intervention. The upside is that grace will not stop working until it’s all worked out and what began as a good work is brought to completion. It may take until the day of Christ Jesus in some cases, but when Jesus intervenes it will all eventually work out for the good.

Where grace has yet to intervene, problems get layered on problems on top of problems, until the dysfunction drifts into a disaster and people wind up in a prison of woe, or wealth, or regret. Problems are a given in life. Grace is another way of saying God is working out our problems for maximum good. And isn’t that what salvation actually is—the journey out of impossible problems and into all the problem-filled possibilities of grace?

Back to the story. This little deliverance born of annoyance also proved very problematic for Paul. Did you catch that in the text today? They were stripped naked and beaten mercilessly with rods. People, this is not “Charlie bit my finger and it hurts really bad” kind of bad.  The operative term is flogging; also known as torture. Then they threw them into a maximum security prison and locked their feet in the stocks. This is really, really, really bad.

We might identify today as the beginning of the end for Paul. My lawyer friends might consider Paul’s deliverance of the fortune teller as the proximate cause of his ultimate execution. We will explore that more fully tomorrow. Stay tuned.

Bottom line today: I want you to face reality and all of its problems, and to feel profoundly positive about it. It’s not optimism we need but what I call hopefulism. Life is not about escaping our problems but embracing the gospel in the midst of them. God will work it out. He already is.

Do you still tend to believe that you shouldn’t have problems or that following Jesus should take your problems away? Why or why not?