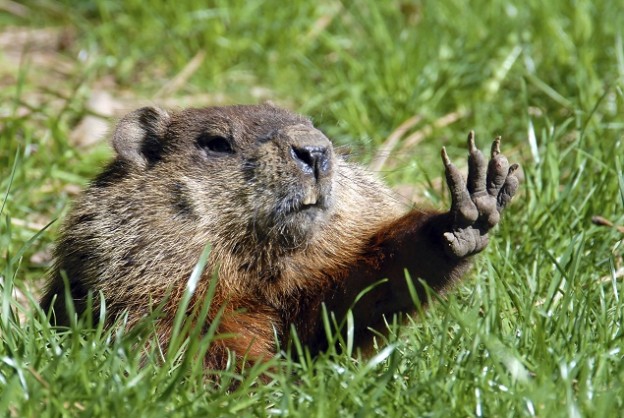 When I was a kid growing up in western Pennsylvania, Groundhog Day was an important event, probably because winters there can be so bleak and sunless that any hope of spring was worth grabbing on to; even if that hope was predicated on the meteorological skills of an oversized rodent that everyone hated the rest of the year. These days when Groundhog Day rolls around, people can’t help but think of the 1993 movie starring Bill Murray as a caustic weatherman who relives the same day over and over again there in Punxsutawney, PA. In fact, Groundhog Day has almost become synonymous with repetition of the same old thing, just like day after day of winter weather.

The endless march of Sundays in the life of a preacher can make each feel a little like Groundhog Day, and during some seasons it can feel like a real chore to come up with something new to say to a congregation. It’s tempting in those times to want to reach back and grab some old sermon material and present it afresh, but there’s also a bit of a stigma attached to it–as though we can only say something once and then move on to what’s new and novel. It’s especially problematic for preachers in the Wesleyan tradition who have been told that John Wesley burned his old sermons every seven years for, as he purportedly said, “it is a shame if I cannot write better sermons now than I did seven years ago.”

But Wesley didn’t actually say that, at least not for himself. He was quoting someone else (“a good man,” he said) who did just that, but Wesley disagreed with his habit of disposing of past work. In fact, Wesley published a large number of his sermons, including the 52 standard ones that continue to be the theological staple of Methodist preaching. You have to imagine that Wesley preached the same sermon in a lot of different places, just like Jesus did (I can’t imagine the Sermon on the Mount only getting one hearing, for example).

The question for those of us who serve congregations year after year is what to do with our old sermons. Should we torch them (or in a 21st century context, delete them) or should we hang on to them and, if so, how might we use them again? I have known preachers who had about five years worth of sermons worked up and, when they got close to the end of the supply, changed churches so they could start over again. That seems lazy, but is using old sermon material lazy or, like Wesley, is it an opportunity to reinforce theological and spiritual concepts that people need to hear over and over again until they get it? After all, that was the whole point of the movie Groundhog Day–sometimes it takes multiple repetitions of hearing before we finally make a change.

I want to suggest that you can use old sermons strategically throughout the course of life with a congregation, even ones they have heard before. You will want to do some tweaking, of course, but there’s something about a good sermon that bears repeating in time. Here are three ways you can go back to the archives and present some old stuff that will sound as fresh as the first time you preached it:

1) Re-present your most popular series every five years or so in a “revised” edition.

A few years back I did a series on family systems, using Abraham’s family as the model. People in my congregation were asking for printed copies to send to friends and family across the country. “You should do that again sometime,” said one of my lay leaders, “because I think we all need the reminders.” Using that old material in a new way a few years down the road allows those who heard it the first time to reengage the material and catches up new people on something with which the rest of the congregation resonated. You might pull out some stories and add new stuff, but a good series will preach again and again if given room to breathe in between.

Consider using old sermons as a “best of” series in the summer.

When hosts of national radio shows go on vacation, stations will often run “best of” shows during the hiatus. People love to revisit some of the best old bits, stories, guests, and ideas. If you’re looking for a summer sermon series that will give you a bit of a break on preparation and give the congregation a chance to tap into their favorite sermons, think about surveying them to come up with a list of “sermons I wish I could hear again.” You might be surprised at how they respond. Most people don’t remember everything we say anyway, just the topic or a couple of key words or stories. If people will watch The Shawshank Redemption every time it comes on cable (like every other day, it seems), they can certainly reengage some of your best stuff!

Self-publish some of your old sermons and make them available to the congregation.

Old sermons and series can make great gifts for visitors and give your people something to share with others. Consider editing them and then publishing them in a book format for sale or to use as gifts. There’s no reason they should languish somewhere on your hard drive. Get them out there where they can keep presenting the Word even after you’ve preached them.

I don’t know what Punxsutawney Phil will prognosticate weather-wise today, nor do I know if Bill Murray gets a sense of deja vu every February 2nd, but I do know that going back to the well for old sermons can be a useful tool for a preacher during certain seasons of the year!