A Study in How God Gets Things Done - Seedbed
close
Menu 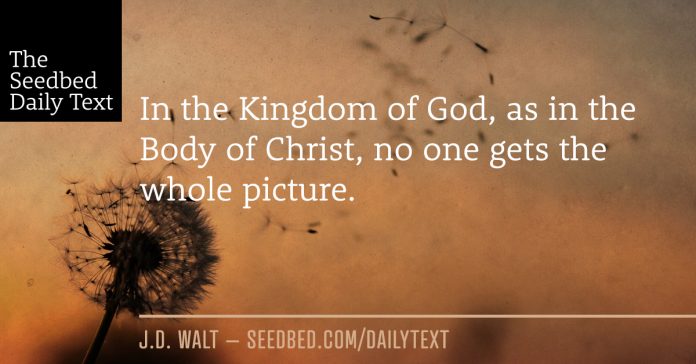 At Caesarea there was a man named Cornelius, a centurion in what was known as the Italian Regiment. He and all his family were devout and God-fearing; he gave generously to those in need and prayed to God regularly. One day at about three in the afternoon he had a vision. He distinctly saw an angel of God, who came to him and said, “Cornelius!”Cornelius stared at him in fear. “What is it, Lord?” he asked.The angel answered, “Your prayers and gifts to the poor have come up as a memorial offering before God. Now send men to Joppa to bring back a man named Simon who is called Peter. He is staying with Simon the tanner, whose house is by the sea.”When the angel who spoke to him had gone, Cornelius called two of his servants and a devout soldier who was one of his attendants. He told them everything that had happened and sent them to Joppa.

When God is about to do something significant, he often gives the vision or pieces of the vision to many people. Next he begins introducing those people to each other. That’s certainly the story with today’s Daily Text. The Holy Spirit gives instruction through a vision to Cornelius to send for Peter.  Tomorrow we will witness the vision given to Peter. The day after that the visions will come together into a catastrophic epiphany of Grace.

In the Kingdom of God, as in the Body of Christ, no one gets the whole picture. Everyone gets a piece to contribute or a part to play. The young see visions. The old dream dreams. No one can take credit. It’s too big for that. Everyone finds themselves generously sharing in the glory of God.

There are three keys to getting in on the action. First, you have to obey without having the whole picture and even if it doesn’t make perfect sense to you. Second, you must humble yourself to submit to others and the portion of the vision they carry. Third, you must be patient to let the vision unfold in its own sequence and time frame.

On a much much smaller scale than what we see here, Seedbed is the outcome of this kind of process. The further and further we go with Seedbed, the more and more we meet others with whom God has shared the vision. It’s almost uncanny.

What’s the vision? We’re gathering, connecting and resourcing the people of God to sow for a great awakening. We want to be about a bigger gospel, concerned with more than getting people into Heaven. Our passion is for the rest of the gospel, which is all about getting heaven into people.

In subtle and not so subtle ways that’s what I’m up to with these writings in the Daily Text. One immediate way you can join us in this vision is to share the Daily Text with your friends, family churches and communities.

Getting back to where we started today; that’s what the Holy Spirit is up to with Cornelius and Peter—a bigger gospel. More on that to come.

Do you now, or have you ever, found yourself in the midst of a work of God you knew was much larger than the part you were seeing or participating in? Have you met others who were also carrying the same vision just in a different version?