Has Anybody Got a Trumpet? - Seedbed
close
Menu 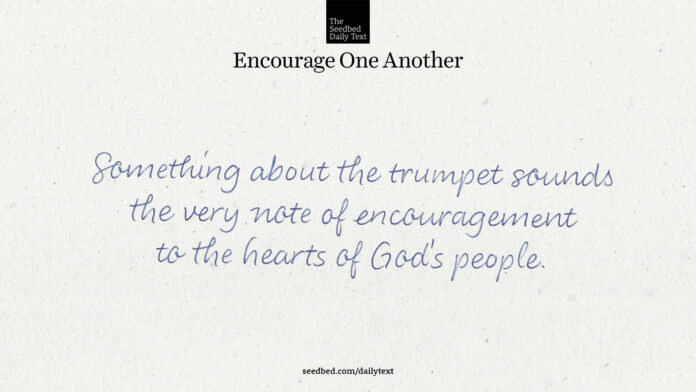 16 Dividing the three hundred men into three companies, he placed trumpets and empty jars in the hands of all of them, with torches inside.

17 “Watch me,” he told them. “Follow my lead. When I get to the edge of the camp, do exactly as I do. 18 When I and all who are with me blow our trumpets, then from all around the camp blow yours and shout, ‘For the Lord and for Gideon.’”

19 Gideon and the hundred men with him reached the edge of the camp at the beginning of the middle watch, just after they had changed the guard. They blew their trumpets and broke the jars that were in their hands. 20 The three companies blew the trumpets and smashed the jars. Grasping the torches in their left hands and holding in their right hands the trumpets they were to blow, they shouted, “A sword for the Lord and for Gideon!” 21 While each man held his position around the camp, all the Midianites ran, crying out as they fled.

Has anybody out there got a trumpet?

And with this, our God defeated the armies of mighty Midian.

Has anybody out there got a trumpet?

Trumpets figure prominently in the story of God.

Something about the trumpet sounds the very note of encouragement to the hearts of God’s people.

“Say to the Israelites: ‘On the first day of the seventh month you are to have a day of sabbath rest, a sacred assembly commemorated with trumpet blasts. 25 Do no regular work, but present a food offering to the LORD.’ ” Leviticus 23:24-25

Then have the trumpet sounded everywhere on the tenth day of the seventh month; on the Day of Atonement sound the trumpet throughout your land. Leviticus 25:9

When you go into battle in your own land against an enemy who is oppressing you, sound a blast on the trumpets. Then you will be remembered by the LORD your God and rescued from your enemies. Numbers 10:9

When the trumpets sounded, the army shouted, and at the sound of the trumpet, when the men gave a loud shout, the wall collapsed; so everyone charged straight in, and they took the city. Joshua 6:20

Blow the trumpet in Zion; sound the alarm on my holy hill. Let all who live in the land tremble, for the day of the LORD is coming. It is close at hand— Joel 2:1

The seventh angel sounded his trumpet, and there were loud voices in heaven, which said: “The kingdom of the world has become the kingdom of our Lord and of his Messiah, and he will reign for ever and ever.” Revelation 11:15

Listen, I tell you a mystery: We will not all sleep, but we will all be changed— 52 in a flash, in the twinkling of an eye, at the last trumpet. For the trumpet will sound, the dead will be raised imperishable, and we will be changed. 1 Corinthians 15:51-52

The first trumpet we see in Scripture; however, is a great mystery.

On the morning of the third day there was thunder and lightning, with a thick cloud over the mountain, and a very loud trumpet blast. Everyone in the camp trembled. Exodus 19:16

Best we can tell, this was the very trumpet of God—sounded by God himself!

As the sound of the trumpet grew louder and louder, Moses spoke and the voice of God answered him. Exodus 19:19

And something tells me the final trumpet, “the lasts trumpet” will also be sounded by God himself.

Listen, I tell you a mystery: We will not all sleep, but we will all be changed— 52 in a flash, in the twinkling of an eye, at the last trumpet. For the trumpet will sound, the dead will be raised imperishable, and we will be changed. 1 Corinthians 15:51-52

The first and only real instrument I ever learned to play was the trumpet.

I’m thinking of getting it back out.

Anybody out there got a trumpet and want to join me?

How has this story of God, aka the story of Gideon, encouraged you.