Has Jesus Entrusted Himself to You? - Seedbed
close
Menu 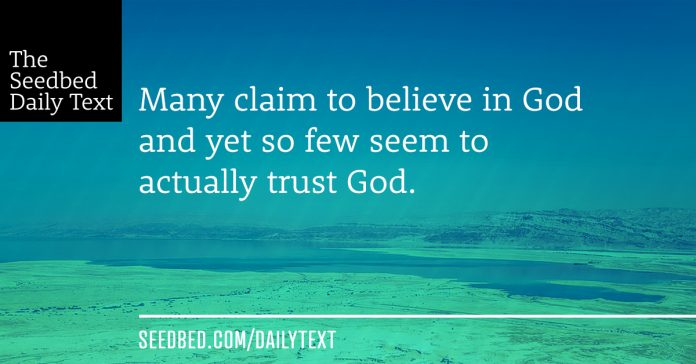 The Jews then responded to him, “What sign can you show us to prove your authority to do all this?”

Jesus answered them, “Destroy this temple, and I will raise it again in three days.”

They replied, “It has taken forty-six years to build this temple, and you are going to raise it in three days?” But the temple he had spoken of was his body.  After he was raised from the dead, his disciples recalled what he had said. Then they believed the scripture and the words that Jesus had spoken.

Now while he was in Jerusalem at the Passover Festival, many people saw the signs he was performing and believed in his name. But Jesus would not entrust himself to them, for he knew all people. He did not need any testimony about mankind, for he knew what was in each person.

Has Jesus entrusted himself to you?

We are beginning to see a recurring word early on in this Gospel. We’ve already seen the word or some form of it seven times. In the original Greek, it is pisteuo. The word is most commonly translated into English as “believe.”  In my judgment, the word holds a much richer meaning than that conveyed by the term, “believe.” It means to place faith in or to have confidence in or to trust.

We live in the age of easy-believism. It’s easy to believe something because belief has largely come to be associated with some kind of mental or intellectual assent. The word is most commonly used to signify our agreement with some concept or proposition. As a consequence, a person can believe in something without actually demonstrating any confidence or trust in that which is believed.

Many claim to believe in God and yet so few seem to actually trust God. Trust or faith means belief in action. Faith does not mean mental assent to a propositional truth. Faith means demonstrated trust.

Here’s what I find so interesting about this text. But Jesus would not entrust himself to them, for he knew all people.It’s the same basic word translated as “believe” in the earlier instances.

Abba Father, thank you for your Son, Jesus. Thank you for this gracious and patient invitation to entrust ourselves to him. Thank you for his infinite trustworthiness. Fill us with the Holy Spirit in ways that grow us up to become the kind of people Jesus can entrust himself to. It is in his name we pray, amen.

1. How does this understanding of discipleship as becoming people Jesus can trust challenge you?

2. What impact has this notion of “easy believism” had on the church and its witness in the world.

3. What if Jesus will only entrust himself to us to the extent we actually entrust ourselves to him? What keeps us from trusting him more?