Have Mercy on Me a Sinner - Seedbed
close
Menu 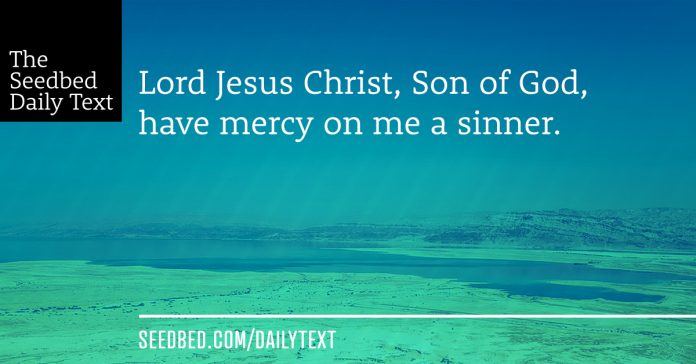 The next day the great crowd that had come for the festival heard that Jesus was on his way to Jerusalem. They took palm branches and went out to meet him, shouting,

“Blessed is he who comes in the name of the Lord!”

“Blessed is the king of Israel!”

Jesus found a young donkey and sat on it, as it is written:

“Do not be afraid, Daughter Zion;

see, your king is coming,

seated on a donkey’s colt.”

Now the crowd that was with him when he called Lazarus from the tomb and raised him from the dead continued to spread the word. Many people, because they had heard that he had performed this sign, went out to meet him. So the Pharisees said to one another, “See, this is getting us nowhere. Look how the whole world has gone after him!”

“Do not be afraid, Daughter Zion; see, your king is coming, seated on a donkey’s colt.”

Today’s text affords us an opportunity to get to a high place where we can remember the larger span of the story and try to fathom the future while beholding the one who holds it all together.

Something tells me Jesus was remembering that fateful day when the people of Israel asked the prophet Samuel to appoint for them a king so they could be like the other nations around them. I wonder if he remembered the Word of God to Samuel concerning this request: “And the Lord said to Samuel, “Obey the voice of the people in all that they say to you, for they have not rejected you, but they have rejected me from being king over them” (1 Sam. 8:7 ESV).

Now, King Jesus, the one who was born a King, in the city of David no less, comes into Jerusalem, the city of kings. The significance of this moment is as thick as the irony. The kingship of God’s people, Israel, was being restored to its rightful owner, and no one had any idea of it, but not before the great and final rejection.

Within days we will hear the ruler of Israel, Pontius Pilate, presenting Jesus to the people with these fateful words, “Here is your king” (19:14). Then he will ask, “Shall I crucify your king?” (19:15). And the chief priests will shout their incredible verdict, “We have no king but Caesar” (19:15).

As Jesus dies on the cross a sign will be posted over his head, “JESUS OF NAZARETH, THE KING OF THE JEWS” (19:19). It will be a final sign, yet one that never stops speaking, written in three languages—Aramaic, Latin, and Greek. Today this sign is translated into thousands of languages all over the world and one day every nation tribe and tongue will together make the confession, “Jesus Christ is Lord!”

And he shall reign forever and ever!

Abba Father, we thank you for your Son, Jesus, who is our King, high and holy, meek and lowly. Open the eyes of our heart to behold this scene, this triumphal entry which will turn tragic. Come, Holy Spirit, and turn it to our transformation. We reject the ways of this world and we embrace the ways of your kingdom, which is the royal way of the holy cross. We pray in Jesus’ name, amen.

1. What jumps out of today’s text and captures your attention?

2. How will you posture your heart as a participant in this unfolding passion story as we enter Jerusalem? How will you move beyond passive observation?

3. As we proceed, bring this ancient prayer to the forefront of your praying. It’s called the Jesus Prayer. “Lord Jesus Christ, Son of God, have mercy on me a sinner.” Over and over and over. How does that sit with you?

© Seedbed 2021
Have Mercy on Me a Sinner
MORE STORIES