Have You Ever Met Simon of Cyrene? - Seedbed
close
Menu

32 As they were going out, they met a man from Cyrene, named Simon, and they forced him to carry the cross.

This was not how the day was supposed to go. He was on his way somewhere else to do something else. He didn’t have time for this. He didn’t want the blood of a common criminal all over his clothes. He didn’t want to do it. Simon wanted no part of this despicable task involving this condemned prisoner. The Roman soldiers “forced him to carry the cross.”

Why? Because Jesus could not carry it any longer. He had broken down and collapsed underneath the weight of it all. Keep in mind, this was the one who calmed a storm and raised the dead and delivered the demon possessed and healed the sick. Despite being “very God of very God,” he could not carry his cross.

We need to understand what an uneventful ordinary day this was in the life of an insignificant province of Rome. Executions like this were a fact of life. No one had any idea they were dealing with a god, much less the God of Heaven and Earth. I think I grew up with the idea that Simon was a hero. Simon doesn’t deserve any merit badges for his effort. He was in the wrong place at the wrong time. He didn’t want to do it. He had to be conscripted.

Sometimes, perhaps more often than not, we can only understand the significance of our actions from the vantage point of history. So often, the happenings that make history didn’t even make the news at the time. In fact, most of what makes the news doesn’t get a footnote in the history books. Then there are those times, and they probably happen all the time, when we get pushed to do something we didn’t want to do for someone we didn’t even know and it is remembered for all eternity.

I think that’s what Jesus was talking about when he said,

40 “The King will reply, ‘Truly I tell you, whatever you did for one of the least of these brothers and sisters of mine, you did for me.’

What if from the vantage point of eternity, which is already afoot, it’s those Simon of Cyrene moments that mattered the most?

Lord Jesus, you keep on giving us the gift of hindsight yet we so rarely turn that into foresight. Come Holy Spirit and open the eyes of our hearts that as we recount this ancient story, it will be touched by fire and transformed into a holy vision of the way ahead. Grace us to be the willing, unsuspecting cross-bearers of Jesus. Give us the courage to volunteer for the inglorious, thankless, and un-prestigious work of cross-bearing among the least and the faith to believe it matters the most. For the sake of your great name, Jesus, Amen. 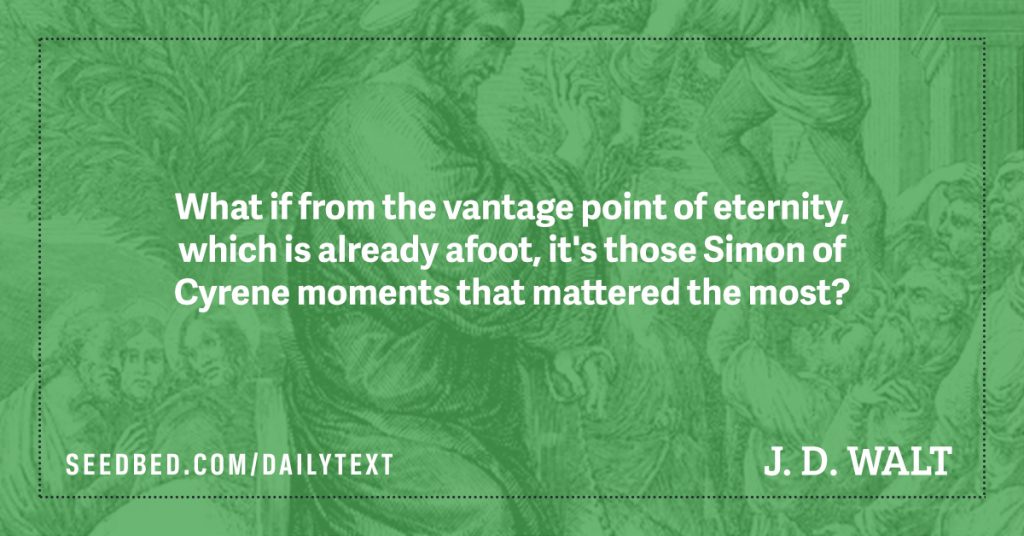 1. What is the meaning of all of this for you?

2. Wouldn’t you rather volunteer than to be forced? What can we learn from this?

3. Do you know someone who just does this Simon of Cyrene kind of work, willingly? Take a minute to reach out and encourage them today.

© Seedbed 2021
Have You Ever Met Simon of Cyrene?
MORE STORIES