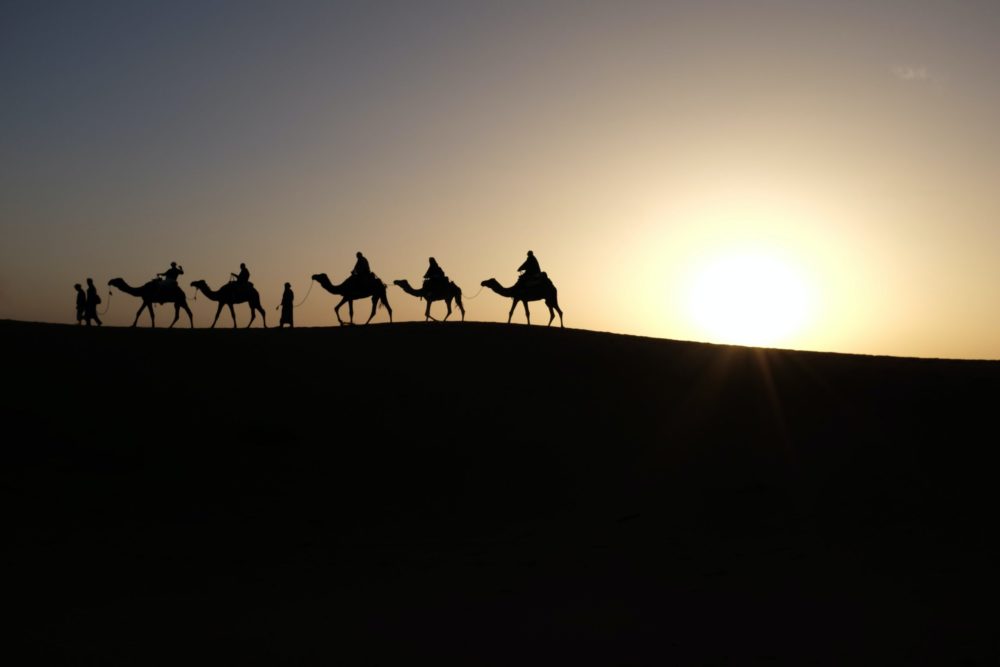 Then Herod called the Magi secretly and found out from them the exact time the star had appeared. He sent them to Bethlehem and said, “Go and search carefully for the child. As soon as you find him, report to me, so that I too may go and worship him.”
After they had heard the king, they went on their way, and the star they had seen when it rose went ahead of them until it stopped over the place where the child was. When they saw the star, they were overjoyed. On coming to the house, they saw the child with his mother Mary, and they bowed down and worshiped him. Then they opened their treasures and presented him with gifts of gold, frankincense, and myrrh. And having been warned in a dream not to go back to Herod, they returned to their country by another route.
When they had gone, an angel of the Lord appeared to Joseph in a dream. “Get up,” he said, “take the child and his mother and escape to Egypt. Stay there until I tell you, for Herod is going to search for the child to kill him.”
So he got up, took the child and his mother during the night and left for Egypt, where he stayed until the death of Herod. And so was fulfilled what the Lord had said through the prophet: “Out of Egypt I called my son.”
When Herod realized that he had been outwitted by the Magi, he was furious, and he gave orders to kill all the boys in Bethlehem and its vicinity who were two years old and under, in accordance with the time he had learned from the Magi.

Shortly after Jesus was born, he was already under a death sentence. Few children have entered the world in this way. Joseph had been warned in a dream that Herod was searching for the child in order to destroy him. This was the same Herod, known as the Great, who had undertaken the massive building project of renewing and expanding the second temple, a work that had begun around 20 BC.

Our text reveals Herod as a disturbed and deeply dishonest man. He hid, for example, his real motivation from the Magi in seeking the child, and they were warned in a dream not to return to him. Though Herod pretended that he, too, would like to worship this one who had been born king of the Jews, he actually had other plans, much darker ones in mind, which were fueled by both anxiety and fear. As a powerful man who would tolerate no rival to his authority, Herod had already executed his two sons, Alexander and Aristobulus, in 7 BC because he had thought they were plotting against him. Such violence was nothing new to Herod, as he had already dispatched their mother, Mariamne I, much earlier in 29 BC. Continuing this pattern, shortly before he died in 4 BC or so, Herod executed yet another son, this time Antipater, who had been born of his wife Doris. It is this man, this monster, who had his eyes on the baby Jesus.

How could Joseph, a decent but obscure man, know anything of the designs of a powerful and corrupt king who would not even reveal them to the Magi? No one less than almighty God, then, would have to intervene in this awful situation in what looks like a contest between a very powerful king, on the one hand, and a nearly helpless infant, on the other.

With things so out of balance, so out of whack, in terms of power configurations, the Almighty tipped the balance and sent an “angel of the Lord”—a spiritual intelligence not limited to the confines of time and space—to Joseph, this lowly man, in order to warn him in a dream: “Get up, . . . take the child and his mother and escape to Egypt.” The matter must have been urgent because Joseph took the child and his mother, Mary, and left for Egypt right away, at night. There was little to be gained by delay and much to lose.

The descent of Jesus, Mary, and Joseph into Egypt, which was about seventy-five miles or so from Bethlehem, is a powerful biblical image and calls to mind the vision of an earlier journey when Jacob, at his son Joseph’s request, and due to suffering from the famine then in Canaan, made his way to the land of the Pharaohs. Since the small and struggling family during Herod’s reign was forced to flee their own land to escape persecution, then they are rightly described as refugees. Think of it: Jesus had not even learned to walk yet, and his family was already on the run.

The Egypt of the time of Jesus was a much different place than the country Jacob and his sons had entered much earlier. The land had been conquered by Rome in 30 BC, and it was made a province with an accompanying civic order and legal structure for which Rome had become famous. In other words, the land was now a remarkably hospitable place for most people, and a city such as Alexandria had a large population of Jews. In short, it was a great place to hide. The sojourn in Egypt was, of course, brief since Herod died in 4 BC or possibly 2 BC. Dionysius Exiguus, otherwise known as Denis the Small, a sixth-century monk (470–544), tinkered with the old Julian calendar and arrived at dates that do not match our expectations with the result that Jesus, believe it or not, was likely born around 5 BC.

With the death of Herod, the old saying from the prophet Hosea, “out of Egypt I called my son” (Hos. 11:1b), received new meaning, as it was now applied by the author of Matthew to Jesus himself. Originally, during the eighth century BC, Hosea had viewed the referent as Israel: “When Israel was a child, I loved him” (v. 1a). However, the two circles of meanings offered by Hosea and Matthew are not in conflict, but are in a typological relation to one another. That is, Hosea recalled the historic exodus when the Holy One of Israel delivered the ancient Israelites from Egyptian bondage. Matthew is well aware of these meanings and affirms them, but sees their fulfillment in the exodus of Jesus out of Egypt, a deliverance that will underscore that the God and Father of Jesus will set his people free in remarkably new ways. All of the historic meanings of Hosea’s prophecy are affirmed.

Nothing in the life of Jesus calls for their diminishment in the least or for their rejection. Rather, his life gathers up all of these ancient meanings and they then find their completion, their perfection, in his own life in a deliverance that he and his Father will bring about through the later giving of the Holy Spirit. Such a new exodus, brought about by God’s Messiah, will deliver not simply from physical bondage (as great as this is), but also from the far greater spiritual bondage, the captivity of sin that oppresses all people, both Israelite and non-Israelite alike.

Observe also in this passage from Matthew that the Almighty is an evocative God, the one who calls forth, who addresses those in relation to him to follow in obedience the divine will and design. This relationship of obedience and trust, evidence of a lively faith, characterizes the life of Jesus as well, who as a true human being submitted his will to that of the Father.