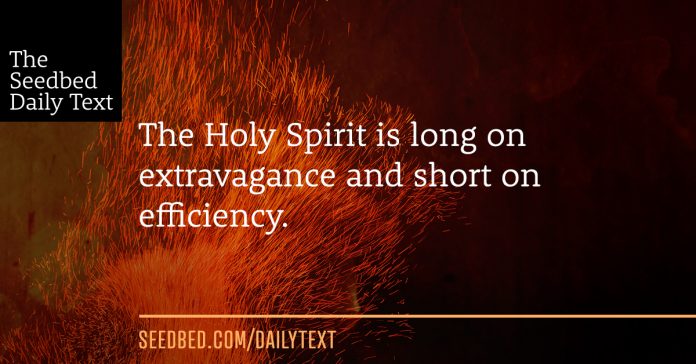 Again Jesus began to teach by the lake. The crowd that gathered around him was so large that he got into a boat and sat in it out on the lake, while all the people were along the shore at the water’s edge. 2 He taught them many things by parables, and in his teaching said: 3 “Listen! A farmer went out to sow his seed. 4 As he was scattering the seed, some fell along the path, and the birds came and ate it up. 5 Some fell on rocky places, where it did not have much soil. It sprang up quickly, because the soil was shallow. 6 But when the sun came up, the plants were scorched, and they withered because they had no root. 7 Other seed fell among thorns, which grew up and choked the plants, so that they did not bear grain. 8 Still other seed fell on good soil. It came up, grew and produced a crop, some multiplying thirty, some sixty, some a hundred times.”

9 Then Jesus said, “Whoever has ears to hear, let them hear.”

45. The Holy Spirit works through Jesus to communicate the nature of God and the Gospel in a variety of ways. Last week the analogy was fishing for people. This week it’s sowing the seeds of the Gospel into the soil of peoples’ lives. As we read through the Bible we witness a God who longs to communicate with people. He often utilizes something we understand, like seeds, to teach us about something we struggle to grasp, like the nature of God.

46. The Spirit reveals a God who works like an extravagant sower. The Holy Spirit is long on extravagance and short on efficiency. Efficiency wants to do the research and determine the location of the “good soil” in advance and only sow there. This is not how the Gospel works. The gospel works through abundant extravagant sowing—everywhere and all the time. I mean, who sows seed on the path?

47. According to this parable, something like 3 out of every 4 seeds sown fails. At the same time, no effort to sow the Gospel will ever be a failure. Regardless of whether it amounts to anything or not, the simple act of sowing the seed communicates the extravagant love of God. The Spirit of God never stops sowing the seed of the good news of Jesus Christ.

49. Final thought. The harvest is not up to the sower. The sower’s only job is to sow extravagantly . . . everywhere . . . all the time. The pressure’s off. The Holy Spirit will bring the return. It comes down to being willing to have a high fail rate while knowing you cannot fail.

In some ways, I think this may be how the gospel works. It’s about a high fail rate without failing.

Spirit of the Living God, fall afresh on me. I repent from attaching success or failure in in sowing the Gospel to my own efforts or performance. It’s all about the power of the seed. Increase my confidence in the seed of the Word of God.  Melt me. Mold me. Fill me. Use me. For the glory of your name, Jesus. Amen.