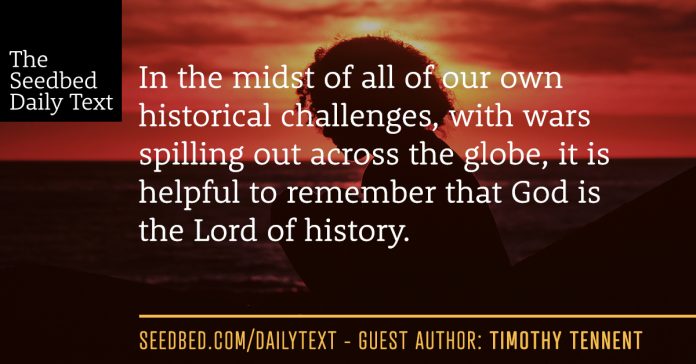 1 Give praise to the Lord, proclaim his name;
make known among the nations what he has done.
2 Sing to him, sing praise to him;
tell of all his wonderful acts.
3 Glory in his holy name;
let the hearts of those who seek the Lord rejoice.
4 Look to the Lord and his strength;
seek his face always.

5 Remember the wonders he has done,
his miracles, and the judgments he pronounced,
6 you his servants, the descendants of Abraham,
his chosen ones, the children of Jacob.
7 He is the Lord our God;
his judgments are in all the earth.

8 He remembers his covenant forever,
the promise he made, for a thousand generations,
9 the covenant he made with Abraham,
the oath he swore to Isaac.
10 He confirmed it to Jacob as a decree,
to Israel as an everlasting covenant:
11 “To you I will give the land of Canaan
as the portion you will inherit.”

39 He spread out a cloud as a covering,
and a fire to give light at night.
40 They asked, and he brought them quail;
he fed them well with the bread of heaven.
41 He opened the rock, and water gushed out;
it flowed like a river in the desert.

42 For he remembered his holy promise
given to his servant Abraham.
43 He brought out his people with rejoicing,
his chosen ones with shouts of joy;
44 he gave them the lands of the nations,
and they fell heir to what others had toiled for—
45 that they might keep his precepts
and observe his laws.

Psalms 105 and 106 are companion songs used to bring Book Four to a close. These are two of the great historical psalms found in the Psalter. They should be read together because only together do they bring out the two different perspectives on history: history from the divine side and history from the human side.

From a chronological perspective, the two psalms also form a pair because Psalm 105 recounts history from the creation of the world through the exodus from Egypt, concluding with the entrance into the Promised Land. Psalm 106 picks up the story and carries us from the exodus all the way through captivity.

Psalm 105 looks at history through the lens of God’s mighty acts. The song is exuberant and majestic as it recounts “the wonders he has done, his miracles, and the judgments he pronounced” (v. 5). God remains the great and unfailing subject of the psalm. God made a covenant with Abraham and confirmed that covenant with Isaac and Jacob (vv. 9–10). God gave them the land of Canaan even though they were few in number and wanderers on the earth (vv. 11–13). God is the one who sends Joseph ahead of them to rescue them from a later famine (vv. 17–22). God sent Moses and Aaron to perform miraculous signs (vv. 26–27). God sent the plagues to Egypt, which are recounted in detail, culminating in the death of the firstborn sons (vv. 28–36). God is shown to be the one who led them out of Egypt and provided for them in the wilderness (vv. 37–43). Finally, it is God alone who gave them his law, and brought them into the Promised Land to dwell in peace (vv. 44–45).

This psalm is a celebration of the power and sovereignty of God. It never puts the Israelites in the subject line and, with it, all the ways they rebelled or disobeyed. The psalm wants us to see history through the divine lens. God is the author of history. He will bring it to its appointed end. He is in control. This whole perspective is so powerful that our feeble actions, even all the ways we resist and impede God’s unfolding plan, are so miniscule in the larger scheme of history that they are not even worth mentioning.

This is history from the upper side. This is history as seen from the portals of heaven. In the midst of all of our own historical challenges, with wars spilling out across the globe, terrorism creating fear and anguish, huge numbers of people being displaced from their homes, it is helpful to remember that God is the Lord of history. We can join with the psalmist in his final declaration in this psalm: Hallelujah!