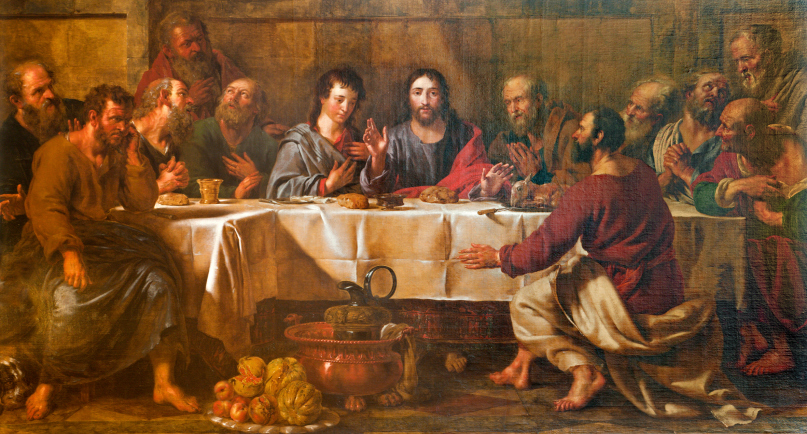 It was here, in Holy Communion, that the Church saw fully and completely what the potential cost of discipleship entailed: death. And yet it was literal good news, because despite his death, Jesus Christ was currently present with them in this very act of Holy Communion. Read more from Steve Bruns’ series on the early church and discipleship.

Probably the single greatest difference between Church practice today and Church practice in the first three hundred years of its existence is in Holy Communion. Today, anyone can sit through the service and witness people receiving the sacrament. In the Wesleyan tradition, anyone can receive the sacrament if they are sincere in wanting to grow closer to God since we see it as a potentially converting ordinance as well. In fact, in many congregations, attendance will drop on the Sundays that the Lord’s Supper is celebrated because people know it means the service will likely last longer than usual.

Completely contrary to this practice, the early Church celebrated the Eucharist weekly, and if someone attended the service and was not yet a baptized Christian, he or she was escorted out of the service and the doors were shut before the sacrament was shared. Not only were visitors removed from the service, but even those who were committed to becoming Christians and in training to do so, the catechumens, were led out of the service. Holy Communion was only for those who were in Christ.

Outsiders were very curious about what went on in those closed portions of the Christians’ worship services and many outlandish rumors were started, most of which helped contribute to the readiness of the authorities to persecute Christians when the opportunity arose. It was said that Christians were cannibals, since people overheard that they eat someone’s body and drink blood. Even in the pluralistic Roman society, this was an action that was beyond the scope of acceptable. There are very few writings from those early Christians intended to be read by non-Christians, defending the Christian practice and explaining what was really happening behind closed doors. The fact that there are so few defenses, or apologies, of what the sacrament was shows that even with negative public perception, the Christians did not readily share what Holy Communion was with outsiders. And the Church still grew.

For these early Christians, the Eucharist was the main form of discipleship as well. It was the climax of every service they celebrated. For the entire portion of the service leading up to the Eucharist, the people were being raised up to the throne of God in heaven. Their prayers focused them on God, petitioning God to create the Kingdom on earth as it is in heaven. The reading of Scripture and expounding upon it showed how God had been acting throughout history to prepare the world for the coming of Jesus Christ, and how Christ was still present in the world through the Church, his Body. Finally in the Eucharist, as the people have been ascending to heaven, heaven comes down to earth as the Holy Spirit eucharizes the bread and wine so that the people in Christ actually receive Christ. In Holy Communion, heaven and earth meet.

What this did for the Christians was to give an objective reality to the Christian experience. Not every worship service was an ecstatic journey into the third heaven. Not every presider was skilled at preaching, or even praying on behalf of the people. Not every Christian felt like they were in the presence of the Creator and Sustainer of the Universe every week. But in the sacrament, the Christians knew, whether or not they felt it, that Christ was present. They knew they were standing in the presence of the God of all who gave all for them. And they knew that by receiving the sacrament, they were receiving more of that God within them for their transformation and empowerment to be the faithful disciples they were called to be.

All of the other means by which the Church created and reinforced discipleship were found in the celebration of the sacrament. It was only celebrated when the people gathered together as the Church. Because it was only open to Christians, it reinforced the concept that they were different, a new race in the world not belonging to any nationality or tribe, but to God above all else. It was the climax of corporate worship. It was an extensive exercise in prayer, prayer that used numerous scriptural references from both the Old Testament and what would become the New Testament. It was here, in Holy Communion, that the Church saw fully and completely what the potential cost of discipleship entailed: death. And yet it was literal good news, because despite his death, Jesus Christ was currently present with them in this very act of Holy Communion. No one tried to explain how Christ was present, however. That did not come until centuries later in the West. They simply knew Jesus was there.

Read the rest of the series on the early church and discipleship here.