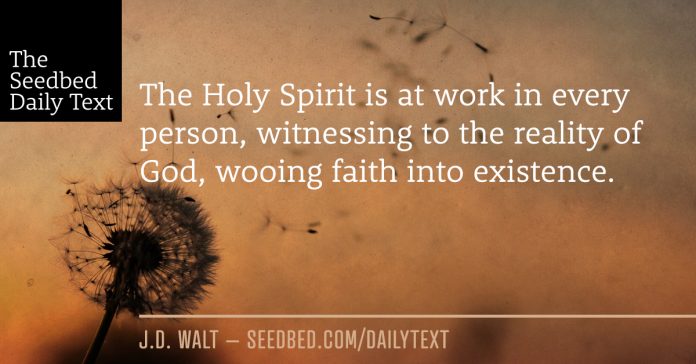 “On one of these journeys I was going to Damascus with the authority and commission of the chief priests. About noon, King Agrippa, as I was on the road, I saw a light from heaven, brighter than the sun, blazing around me and my companions. We all fell to the ground, and I heard a voice saying to me in Aramaic, ‘Saul, Saul, why do you persecute me? It is hard for you to kick against the goads.’“Then I asked, ‘Who are you, Lord?’“‘I am Jesus, whom you are persecuting,’ the Lord replied. ‘Now get up and stand on your feet. I have appeared to you to appoint you as a servant and as a witness of what you have seen and will see of me. I will rescue you from your own people and from the Gentiles. I am sending you to them to open their eyes and turn them from darkness to light, and from the power of Satan to God, so that they may receive forgiveness of sins and a place among those who are sanctified by faith in me.’

It never occurred to me before. Maybe I’m way off base. Today’s text has me wondering.

I think Paul had seen Jesus before his “Blinded by the Light” encounter. I’m talking about prior to his death and resurrection. Let me try to make the case:

All of this leads me to conclude the following: Paul had been around Jesus before. Jesus had a profound effect on Paul. Paul resisted Jesus influence to the point of diametrically opposing him. (It’s starting to sound strangely like another story in the Bible.) Does the name Jonah ring a bell?

So what difference does it make? So what? Let me attempt a connection.

Often, the people who have most resolutely set themselves against faith in Jesus Christ turn out to be some of his most powerful witnesses.

Consider the persistent friendship between J.R.R. Tolkein and the former atheist, C.S. Lewis. What if Tolkein had given up?

It reminds me of a relationship a friend of mine has with a long time friend of his who is an avowed atheist. He has tried everything to witness to this friend about Jesus, and all to no avail. The deeper and more convincing witness is the way my friend has loved this intellectually bound atheist. He simply will not give up on him, despite the way he “kicks against the goads.”

Remember, the Holy Spirit had been at work on Paul long before Paul had any notion of it. It’s the same with people today. The Holy Spirit is at work in every person, witnessing to the reality of God, wooing faith into existence. Men and women everywhere are “kicking at the goads.”

Anyone in your life like that? We never know when and where the next Apostle Paul or C.S. Lewis might emerge. Never give up.

Anyone come to mind in your life who may be “kicking at the goads” as relates to faith in Jesus?