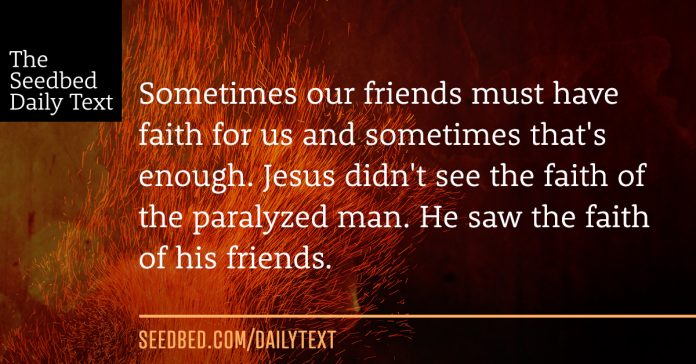 A few days later, when Jesus again entered Capernaum, the people heard that he had come home. They gathered in such large numbers that there was no room left, not even outside the door, and he preached the word to them. Some men came, bringing to him a paralyzed man, carried by four of them. Since they could not get him to Jesus because of the crowd, they made an opening in the roof above Jesus by digging through it and then lowered the mat the man was lying on. When Jesus saw their faith, he said to the paralyzed man, “Son, your sins are forgiven.”

Now some teachers of the law were sitting there, thinking to themselves, “Why does this fellow talk like that? He’s blaspheming! Who can forgive sins but God alone?”

Immediately Jesus knew in his spirit that this was what they were thinking in their hearts, and he said to them, “Why are you thinking these things? Which is easier: to say to this paralyzed man, ‘Your sins are forgiven,’ or to say, ‘Get up, take your mat and walk’? But I want you to know that the Son of Man has authority on earth to forgive sins.” So he said to the man, “I tell you, get up, take your mat and go home.” He got up, took his mat and walked out in full view of them all. This amazed everyone and they praised God,saying, “We have never seen anything like this!”

23. When the Holy Spirit is at work, things will get messy. It’s so easy to look back on this story and see those four guys who brought their friend to Jesus as heroes. Try to put yourself in that room. Jesus was “preaching the word to them,” so the text says. All of a sudden, the roof starts caving in.

This was a show stopper; a major disturbance. Imagine you are at your local church and Billy Graham is the guest preacher. He’s right in the middle of his mesmerizing message when four people burst through the doors carrying a handicapped derelict beggar, putting him down right in front of the pulpit where Dr. Graham was preaching. He can do nothing but stop his message and deal with the situation at hand. This would be maddening to everyone gathered. It would be an embarrassment to them.

What happened that day in Capernaum was a major disturbance of the gathering. Take it a step further and put yourself in the position of the guy who owned the house. He now needed a major roof repair. Think about the crowd gathered four people deep outside of the house, pressing to get in, tiptoeing to see the Son of God and craning their necks to hear what he was saying. These guys carrying the paralytic not only stopped the show inside the house, they cut in line—big time. They didn’t have a ticket or take a number. They skipped. That’s a foul. Did they not realize that other people could have brought their sick friends too had they known this was that kind of event?

This was not a warm fuzzy devotional moment. Sure, everybody was amazed in the end– but at the time it had to be an unwelcome big fat hot mess. When the Holy Spirit is at work, things can get pretty messy, even out of hand. Unplanned and unpredictable stuff happens. We have to learn to see through all that to the greater thing God may be doing.

24. Jesus sees straight through the fracas and spots the faith. He saw their faith.

My hunch? There was only one person present that day who was glad for the mess being made by these four interlopers and their paralyzed friend– Jesus.

When Jesus saw their faith, he said to the paralyzed man, “Son, your sins are forgiven.”

25. Sometimes our friends must have faith for us and sometimes that’s enough. Jesus didn’t see the faith of the paralyzed man. He saw the faith of his friends. There’s that word again for faith: πίστις. “Pistis.” Faith is not about our beliefs. It’s about our believing. Those friends were believing in Jesus on behalf of their friend in need. Can we have faith for someone else? Absolutely. Jesus love it when that happens. That’s what love looks like.

Spirit of the living God, fall afresh on me. Thank you for breaking these stories out of their Sunday School safe-ness for me. Thank you for confronting me with this kind of faith and love in friendship. Awaken that in me for my friends. Melt me. Mold me. Fill me. Use me. For the glory of your name, Jesus. Amen.

Think back through your past. Can you remember anyone who had faith for you? Who in your life right now are you having faith for? Are their friends you are conspiring with to get someone else to Jesus?