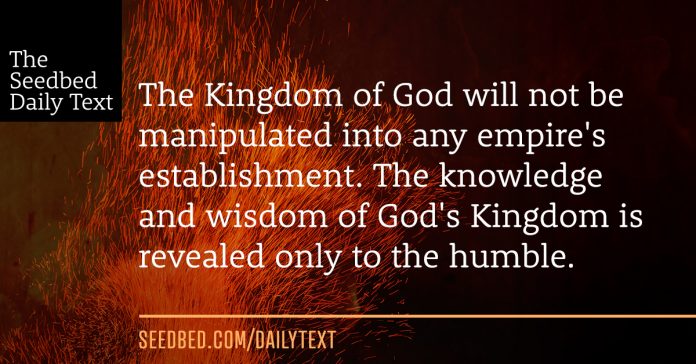 10 When he was alone, the Twelve and the others around him asked him about the parables. 11 He told them, “The secret of the kingdom of God has been given to you. But to those on the outside everything is said in parables 12 so that,

“‘they may be ever seeing but never perceiving,
and ever hearing but never understanding;
otherwise they might turn and be forgiven!’”

13 Then Jesus said to them, “Don’t you understand this parable? How then will you understand any parable? 14 The farmer sows the word. 15 Some people are like seed along the path, where the word is sown. As soon as they hear it, Satan comes and takes away the word that was sown in them. 16 Others, like seed sown on rocky places, hear the word and at once receive it with joy. 17 But since they have no root, they last only a short time. When trouble or persecution comes because of the word, they quickly fall away. 18 Still others, like seed sown among thorns, hear the word; 19 but the worries of this life, the deceitfulness of wealth and the desires for other things come in and choke the word, making it unfruitful. 20 Others, like seed sown on good soil, hear the word, accept it, and produce a crop—some thirty, some sixty, some a hundred times what was sown.”

50. It has always puzzled me. Why does Jesus seemingly indicate he wants to conceal the meaning of the parables?

But to those on the outside everything is said in parables 12 so that,

“‘they may be ever seeing but never perceiving,
and ever hearing but never understanding;
otherwise they might turn and be forgiven!’”

I have a working theory on this. Parables serve as a kind of fishing technique for Jesus. He casts a large net. A certain number of people find themselves caught up in the puzzle of the parable enough to pursue its meaning. Those who ask Jesus for explanation or clarification are the ones to whom the meaning is given.

When he was alone, the Twelve and the others around him asked him about the parables.

I suspect if they had not asked Jesus about the parables he may not have explained them. What if the key to receiving the secrets of the Kingdom of God is simply asking Jesus? Could it be this simple? The passage from seeing to perceiving and from hearing to understanding is humble curiosity; the courage to ask.

The Holy Spirit can’t do much with a prideful person. Prideful people tend to have a low teachability quotient. Could it be that parables tuck the wisdom and insight beneath the surface, out of the reach of those who would readily convert the knowledge into more power for themselves. The Kingdom of God will not be manipulated into any empire’s establishment. The knowledge and wisdom of God’s Kingdom is revealed only to the humble. Could it be that a person’s receptivity to the Holy Spirit is equal to their humility?

51. It makes sense. After all, why didn’t Jesus choose the religious leaders and teachers of the Law to become his disciples? Probably because they already knew it all. Teachers often surprisingly turn out to be the least teachable people of all. The best teachers, however, turnout to be the most teachable people. No matter how much they learn they keep risking the humility of curiosity. Asking questions requires one to publicly admit they don’t have all the answers.

Sometimes I can sit in front of a biblical text for what seems like forever, trying to figure out its meaning or develop some kind of creative angle of teaching. The harder I try the more opaque the text can seem to me. Finally, the aha moment comes, but it’s not the aha of finding the meaning. It’s the aha of humility; giving up on my skills and submitting to asking Jesus to show me the meaning. He always does. I find the more I think I know about something, the less curious I am and the less I am able to learn anything new.

So how about you? Are you a curious person? Willing to ask questions? Let’s work together to become curious before the text, ready to ask Jesus at the beginning of our exploration rather than as a last resort. And let’s learn to approach others like that too.

Spirit of the Living God, fall afresh on me. I want to be more teachable. Grant me the humility to be curious before your Word. Gift me with ears that hear and eyes that see. Melt me. Mold me. Fill me. Use me. For the glory of your name, Jesus. Amen.

What is your teachability quotient? Do you tend to be curious before God’s Word or tend to think you already know what it means?