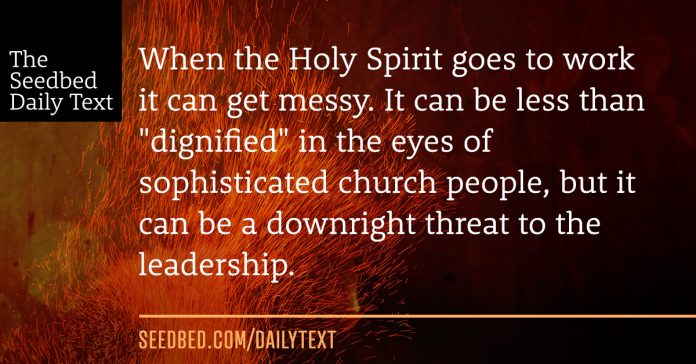 The Pharisees and some of the teachers of the law who had come from Jerusalem gathered around Jesus 2 and saw some of his disciples eating food with hands that were defiled, that is, unwashed. 3 (The Pharisees and all the Jews do not eat unless they give their hands a ceremonial washing, holding to the tradition of the elders. 4 When they come from the marketplace they do not eat unless they wash. And they observe many other traditions, such as the washing of cups, pitchers and kettles.)

5 So the Pharisees and teachers of the law asked Jesus, “Why don’t your disciples live according to the tradition of the elders instead of eating their food with defiled hands?”

6 He replied, “Isaiah was right when he prophesied about you hypocrites; as it is written:

“‘These people honor me with their lips,
but their hearts are far from me.
7 They worship me in vain;
their teachings are merely human rules.’

8 You have let go of the commands of God and are holding on to human traditions.”

99. It’s important to get yesterday’s scene clearly in our minds.

And wherever he went—into villages, towns or countryside—they placed the sick in the marketplaces. They begged him to let them touch even the edge of his cloak, and all who touched it were healed. Mark 6:56

An absolute Holy Spirit phenomenon swept across the land. People ran all over the countryside bringing their sick and demon possessed family and friends to Jesus. Blind eyes finally glimpsed the beauty of their own children. Lame people danced in jubilation.  Deaf ears heard the sound of music for the first time. Poor people could hardly comprehend the extravagant scope of the good news.

100. News had reached Jerusalem of the amazing grace spreading across the land. Headquarters (aka The Temple) dispatched a delegation of officials to see the unfolding miraculous events with their own eyes. Surely they would embrace Jesus and invite him into their fellowship.

Now, with this scene of extraordinary proportions in your mind’s eye, behold what happened next:

The Pharisees and some of the teachers of the law who had come from Jerusalem gathered around Jesus and saw some of his disciples eating food with hands that were defiled, that is, unwashed. . . . So the Pharisees and teachers of the law asked Jesus, “Why don’t your disciples live according to the tradition of the elders instead of eating their food with defiled hands?”

YOU’VE GOT TO BE KIDDING ME?! Dead people are being raised to life again and the religious leadership can only seem to notice Jesus’ disciples aren’t washing their hands before dinner. WHAT THE WHAT!

101. Whenever the Holy Spirit does what the Holy Spirit does best—which is to reverse the curse of sin and death—the masses tend to embrace it. Unfortunately, the “classes” tend to get up in arms about it. I’ve been at the First Methodist Church when the Holy Spirit started coloring outside of the lines. Deliverance and healing broke out at the altar. People experienced freedom from bondages that had held them for decades. Yes, there were some out of the ordinary expressions never before witnessed by most people present, yet they mostly remained open. The most surprising reactions came from the religious authorities. In fact, they did everything in their power to shut it down. The leaders of the meeting were branded heretics (though no one ever identified the particular heresy).

When I read a text like today’s, all of a sudden it’s not so surprising what happened back there. When the Holy Spirit goes to work it can get messy. It can be less than “dignified” in the eyes of sophisticated church people, but it can be a downright threat to the leadership.

102. So when’s the last time you remember the Holy Spirit doing something that was not in the bulletin? Could it be possible our own posture of openness or closed-ness has something to do with this? We need not be afraid of the person and work of the Holy Spirit. Sure, we need wise leaders who can tell the difference between the Holy Spirit’s movement and out of control wildfire and who can shepherd us with grace and truth. More than anything, though, we need to develop the humility to let God be God.

So  here’s the question I’m asking myself: Am I completely open to the work of the Holy Spirit in my life? Even if I don’t understand it? Even if it makes me uncomfortable? Even if it means I am ……

Spirit of the Living God, fall afresh on me. Lord Jesus, thank you for showing us what it looks like when the Spirit of God unites with the Word of God in a human being completely given to God. It excites us and terrifies us at the same time. Give me a deeper openness to what I don’t understand. Grant me a deeper trust than my need to be in control and the humility to risk leaning in to what you might be doing in our time. Melt me. Mold me. Fill me. Use me. For the glory of your name, Jesus. Amen

Do you tend to be a person who leans in to what might be the movement of the Spirit of God– with self abandonment, or do you tend to be one who leans away–with self protection? How can we learn to discern without needing to be so in control?