One of the curiosities in the history of missions is why William Carey became known as the “Father of Modern Missions.” He was not the first modern missionary, the first Protestant missionary, or even the first Baptist missionary. We have already examined the remarkable Moravian missionary movement, which preceded Carey by six decades and sent missionaries all over the world, including India.

This first defining theme of act 2 helps explain why William Carey can be referred to as the Father of Modern Missions. William Carey is the Father of Modern Missions not just because of what he accomplished in India, but primarily because he stimulated the founding of dozens of new voluntary missionary societies, propelling hundreds of new missionaries out onto the field in what became the largest-scale missions mobilization in history. Some of you may have never even heard of William Carey, so we will begin by looking at his life, and then we can more fully appreciate his role in starting the voluntary mission society that has so changed the history of missions.

William Carey was born in England on August 17, 1761. There is little in his early life that would have given any indication of the dramatic way God would use Carey. He was from a very poor family from a tiny village. He had a skin disease that prevented long exposure to the sun, so he became a cobbler. He belonged to the Particular Baptists, widely despised at the time for being religious nonconformists. In every way—economically, socially, and religiously—Carey represented someone at the margins of his society. However, in the providence of God, Carey had become a Christian and had become ordained as a pastor of a small Baptist church.

We first get a glimpse into the zeal of Carey when he challenged his fellow ministers to dedicate one of their monthly meetings to the question, Does the commission given by our Lord Jesus Christ to His disciples still apply to us today? This discussion eventually led Carey to write and publish in 1792 an eighty-seven-page book, which has been called the most influential missionary tract ever written in English. A close examination of the title of the book is very important. Carey called his book An Enquiry into the Obligation of Christians to Use Means for the Conversion of the Heathens. It was not unusual at that time for books to have long, descriptive titles rather than the shorter, often more obscure titles that are given to books today.

The title of Carey’s treatise falls into three major parts. The first part, An Enquiry into the Obligation of Christians, reveals the historical and theological obstacles that Carey faced in becoming a missionary. The latter part of the title, for the Conversion of the Heathens, reveals Carey’s firm commitment to the gospel of Jesus Christ and the need for all peoples to hear and to respond to the gospel. It is the middle of the three parts of the book’s title that has been the most neglected, and yet is arguably the most important. It is the phrase to use means. In this tiny phrase lay the remarkable genius of William Carey and, fascinatingly, the reason why he is known today as the Father of Modern Missions.

The phrase to use means points to the responsibility of Christians to organize themselves and form some structure that would allow them to support missionaries around the world. The Roman Catholics have a long history of allowing a wide range of alliances, known as mission societies, which could focus on and address specific needs, including youth ministry, missions, charitable work, and so forth. Today, many people admire and are acquainted with the late Mother Teresa’s Missionaries of Charity, a society dedicated to serving the poorest of the poor and now operates in more than one hundred different countries.

During the Protestant Reformation, the Reformers did not carry over the idea of creating these societies in the church. Therefore, one of the main reasons why Protestants did not send any missionaries out for the first two hundred years was not only theological; it was also profoundly structural. Although Carey’s Enquiry is filled with solid theology and history, this is not the source of the radical nature of Carey’s proposal. Carey, as a Protestant, had no ecclesiastical structures to look to for guidance. So, he proposed a mission society based largely upon the model of secular trading societies that were being organized for commercial purposes. Carey wrote:

Suppose a company of serious Christians, ministers and private persons, were to form themselves into a society, and make a number of rules respecting the regulation of the plan, and the persons who are to be employed as missionaries, the means of defraying the expense, etc., etc.

Here was a very secular structure—quite un-theological on the surface—which was, in fact, one of the most important theological developments in Protestantism. However, gradually these lay associations not only generated recruits to become missionaries, but eventually generated considerable amounts of money to provide for their support. A new kind of structure was emerging among Protestant churches, which was, inadvertently creating a new power base. The mission society represented a kind of “holy subversion” of a recalcitrant church. The implications this had for lay ministry, for enabling women to exercise their gifts cross-culturally, and for achieving specific, Christian goals in faraway places was enormous.

Today, when a student walks into my office and tells me that they are interested in becoming a missionary, I have at my fingertips a catalog of all the mission agencies in North America, many of which have very specific and focused ministries. The catalog is more than six hundred pages long, listing hundreds of mission organizations. The mission societies collectively made the Great Century possible and continue to be the greatest resource for missions mobilization in the world. Carey’s call to “use means” was, looking back, a spark that ignited one of the great movements in the history of the church, the birth of the Protestant missionary society. 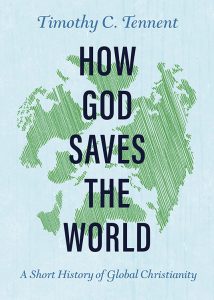 If you enjoyed this article, you’ll enjoy the new book, How God Saves the World: A Short History of Global Christianity by Timothy Tennent. Rather than exploring the history of global Christianity through a long series of countless names and events, Timothy Tennent presents this remarkable journey in the three-act model of a true epic play. This is the perfect succinct, storied history of the global christian movement that honors and illuminates indigenous churches and their lasting impact on the kingdom of God. You can order your copy from our store here.