Holy Week is Our Opportunity to Wholly Commit to Jesus 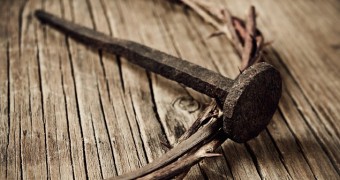 By the time Holy Week arrives, I am so utterly exhausted from Lent that I’m just ready for Easter already. At least, I want to be. But, there’s still a lot that has to go down before that Glorious Resurrection Morning:

There’s a processional with a humble donkey and waving palm branches.

There are those blasted money-changing tables right there in the temple that need turning over.

There’s a lot of teaching still to be taught.

There’s an evil conspiring by those whose power is threatened by Jesus’s upside down ways. There’s an Upper Room and a Last Supper, which is so steeped in Old Testament imagery and meaning that we can’t possibly move forward without looking backward.

There’s a foot-washing and a farewell.

There’s a garden at night and a desperate “If it’s possible, Father, take this cup.”

There’s an arrest, a soldier with a sliced-off ear, and a healer Jesus who persists in mercy.

There’s that terrible Good Friday— the lashing and mocking and brutal crucifixion.

There’s forgiveness and a promise of paradise for the sinner without hope apart from the Savior hanging beside him.

There’s an exhausted “It is finished.”

And there’s our good and beautiful Jesus, submitting again and again to obedience and love, willing to go through with the pain of death for the sake of the world.

There are those faithful women who refuse to leave Jesus’s side, even after his death.

And then there are “The Twelve.”

Those ragamuffin disciples who spent three years with Jesus, following yet trying to keep up. Not with his pace, but with his unexpected ways.

What’s with them anyway? Is this motley crew the best Jesus could do? Just when we think something is finally clicking, it becomes another adventure in missing the point. One minute the disciples are steeped in ministry, and the next arguing over who is the greatest. One minute they are faithfully serving, and the next denying children access to their Rescuer too. What’s it gonna take for them to get it? How dense can they be?

Because of those twelve, in that last week of Jesus’s earthly life, one would betray, one would deny, and nine more would up and vanish from the scene. And we won’t see them again until they are sought after with Good News. Among those closest to Jesus, there would only be one left at the foot of the cross. One. Out of twelve. (No wonder he is “the beloved disciple.”) How could they, those in whom Jesus most fully invested, so quickly bail on him when it mattered most?

And are we so different?

It’s easy for me to oscillate between anger and annoyance for the disciples until I recognize their same feelings and habits inside of me. I love Easter! But Good Friday, not so much. I love abundant life, but the dying to self bit I could live without. I want to love my neighbor as long as it doesn’t include my enemy.

But unlike the disciples, we have an entire New Testament, two thousand plus years of church history, and the Third Person of the Trinity. Not to mention, we know how the story ends. With Resurrected Life. With Glory. We just don’t have any excuse to bail.

Yes, there is still a lot that must take place before Sunday. And by God’s grace, this year I will plaster myself to Jesus’s side. I will go all the way to the cross with Jesus.

Holy Week is Our Opportunity to Wholly Commit to Jesus