How Religious Leaders Can Be Worse than Satan - Seedbed
close
Menu

8 So the women hurried away from the tomb, afraid yet filled with joy, and ran to tell his disciples. 9 Suddenly Jesus met them. “Greetings,” he said. They came to him, clasped his feet and worshiped him. 10 Then Jesus said to them, “Do not be afraid. Go and tell my brothers to go to Galilee; there they will see me.”

11 While the women were on their way, some of the guards went into the city and reported to the chief priests everything that had happened. 12 When the chief priests had met with the elders and devised a plan, they gave the soldiers a large sum of money, 13 telling them, “You are to say, ‘His disciples came during the night and stole him away while we were asleep.’ 14 If this report gets to the governor, we will satisfy him and keep you out of trouble.” 15 So the soldiers took the money and did as they were instructed. And this story has been widely circulated among the Jews to this very day.

Conspiracy theories, hush money, cover-ups, collusion. We could call it “Tomb-Gate.” The worst part of all is that these religious leaders, upstanding men of the community that they were, knew what happened. They knew the body had not been stolen. The whole thing had gotten away from them and they knew it. They had moved well past damage control and into pure deception. And to this very day, millions and millions of unknowing, unsuspecting people have believed their lies.

The most stunning thing to me this time around through Matthew’s Gospel concerns the religious leadership—the Scribes, Pharisees and Chief Priests. They were far worse than Satan. Even scarier, it was the religious establishment leaders themselves who served as the unwitting minions of Satan.

Full Disclosure: I am a religious leader. This scares me to death. This should frighten us all. These men were not bad men. Quite the contrary, these were the most upstanding, respectable men in town. They were the pillars of the community. They knew the Bible inside-out and upside-down. In short, and in many ways, they were the people we aspire to be. And they were the minions of Satan. And if we were to talk to them today they would still be assured they did the right thing.

These men (and women) are still playing their parts to this very day. They aren’t the Pharisees and Sadducees. They are leading our communities. And so often they are making strategic decisions coming from deep convictions that are killing Jesus all over again and have no idea of it. Perhaps I should substitute “we” for “they.”

Then there are those women. Jesus appeared first to these women. They weren’t trying to be super spiritual. They weren’t being “strategic.” They were not looked upon as leaders if they were even seen at all. They had no idea they were playing any kind of role at all.  It was in and through them—the last people on Earth anyone would have ever expected— that God was working out the purposes of his will.

As we turn the page on the final scene of Matthew’s Gospel and prepare to hear the Great Commission once again, it might behoove us to revisit those first lessons Jesus taught his disciples.

Abba Father, I want to believe that I am truly following your Son, yet I know just because I want it to be so does not make it so. Would you fill me with the Holy Spirit in such a way that I become truly humble. Would you strip me of all pretense and posture and give me the grace to let go of my claims to prestige and honor. Give me the courage to identify with the people you identify with and not only to identify with them but to become one of them. In Jesus name, Amen. 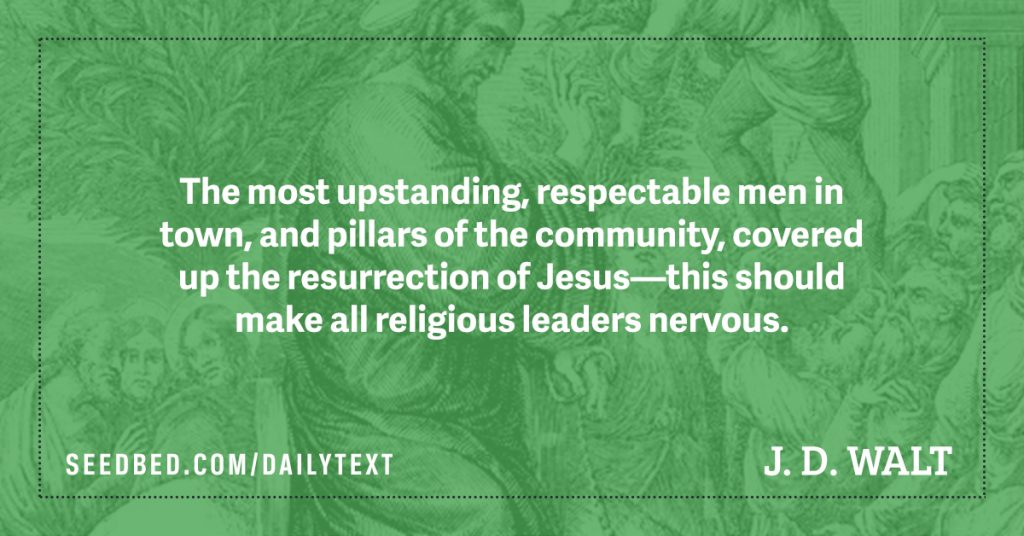 1. Do you grasp that you probably have far more in common with the Scribes and Pharisees than you do with the women who visited the tomb on that first Easter morning?

2. How do you reflect on the diabolical way good faith religion can become the unwitting strategy of Satan to accomplish his purposes?

3. Do you want to become more humble? What will that take?