How to Choose a Church - Seedbed
close
Menu 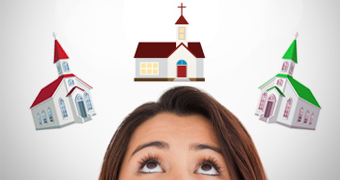 You have a choice when it comes to churches. I’d suggest three specific categories that most churches might fit into.

You can attend Safe Church with a safe pastor who will find the middle of the road and stay in it. You will not have any of your thoughts challenged. You will hear from the pulpit what you already think. The radical kingdom of God will be domesticated to fit your cultural prejudice and your convenient, uncomplicated lifestyle. The infusion of new ideas from science, politics, immigrants, minorities, or education will not be welcomed. The Scriptures will not be interpreted into the world that currently exists but will be used to defend the world as you already see it. Discussion will center on issues already resolved by popular opinion. Being noncontroversial will be the guiding principle of the church. Getting along will matter more than anything else. The instant someone is uncomfortable in a conversation, it will cease or be diverted. Disagreement is akin to sin in Safe Church. These congregations can be found everywhere. You can consume the bland religion found in the middle of the road at Safe Church. And you will be encouraged to smile and play nice.

You can also find a church that claims to have everything figured out–Final Word Church. This church is much bolder than Safe Church. It thrives on controversy and actually is bolstered by enemies. When Oprah says something anti-religious or Congress passes disputed legislation, the sermon for the coming Sunday is set. They have the final word on all doctrinal, ethical, social, and political issues. All you have to do is sign the dotted line of the membership covenant, and they will give you your position on everything–every candidate, every new ethical issue that emerges, every controversial topic. A disciple is a dittohead. These churches declare a kind of biblical authority that places their opinion above Scripture, while quoting just enough select verses to make you think they are biblical. The pastor usually has an ego and needs to be viewed as the savior of the world, the fountain of all wisdom, the master of PowerPoint, and the martyr willing to take a stand on any and every headline issue. Final Word Church is growing. And its people tend to be judgmental, arrogant, and mostly angry at the world.

Or you can attend a church that is willing to wrestle with the tough issues–Maturing Church. You can sit at the table with fellow Christians who are willing to grapple with new emerging questions about faith in every realm of life. You will grow accustomed to hearing an issue discussed by Christians with different perspectives. You will quickly discover that good people can read the same Bible and reach different conclusions. You will be formed as a maturing follower of Jesus in a changing world. Your worldview will continue to develop as you study Scripture and live in a vibrant community. Your church will and should discomfort you at times. Your church will and should expose your arrogance. And reading the Bible will become the most disturbing thing you do, because this world is not aligned with the ways of God. You will find taking up the cross of Jesus to be painful. You will encounter issues for which the answers are not black-and-white–criminal justice, poverty, political systems, use of force. You will develop mental categories for unresolved issues. And you will sit on the same pew with people who do not think like you think but who could not be more brother or sister, because your unity is rooted in the redeeming love that binds you together in Christ. Your church will be filled with vibrant conversations and vibrant love. And the people of Maturing Church will continue to grow in likeness to Jesus, without avoiding the hard questions (like they do at Safe Church) or becoming arrogant in knowing (like they do at Final Word Church).
All these churches can be found in your community.

When asked about the church I belong to, I like to say that we are the theological heirs of a man named John Wesley. He experienced God as holy love that expelled sin, enabling him to be restored in the likeness of Jesus. This profound experience caused him to saddle a horse and ride into the world. He traveled with his Bible open on his lap, reading as he went. He believed the God of love he experienced had gone into the world ahead of him and was calling him to follow. This God was not hiding in doctrines or waiting behind closed church doors to be discovered and debated. This God was en route to redeem his creation from sin. Wesley was given the eyes of God to see children in factories needing education, the poor needing food and shelter, the debtors in prison needing money, the sick needing good medical care. Wesley saw the broken world through the eyes of a loving redeemer. He was not afraid of this world or its ideas, even when it rejected and attacked his God. He was a curious lifelong learner. He wrote about health, money, estate gifts, economic theory, personal grooming, literature, politics, science, and the arts. He made friends among those who had differing Christian theologies, offering his hand of fellowship and a catholic spirit. Wesley did not think God in need of human defense but did think people in need of Godly help. His life of loving service caused people to be interested in his doctrine of sanctification. They wanted to know about the God who could do this kind of thing in a man and prompt such a life of service. We are the heirs of a man who knew that propositional debate as the primary goal of religion could only divide, but holy love could unite.

This theological heritage is viewed by some as a slippery slope into the “isms”–liberalism, new ageism, paganism, and so on. Tolerance, they say, becomes the demon in the room, and before long, anything goes. I beg to differ. I believe Christianity has more to lose from a debate-centered, intolerant, judgmental, arrogant, enemy-making response to the world. If we follow this playbook, we may win the game on points, but there will be no one left in the stands with any interest in what we are doing.

Excerpt from A Charitable Discourse: Talking About the Things That Divide Us by Dan Boone. Used with permission.