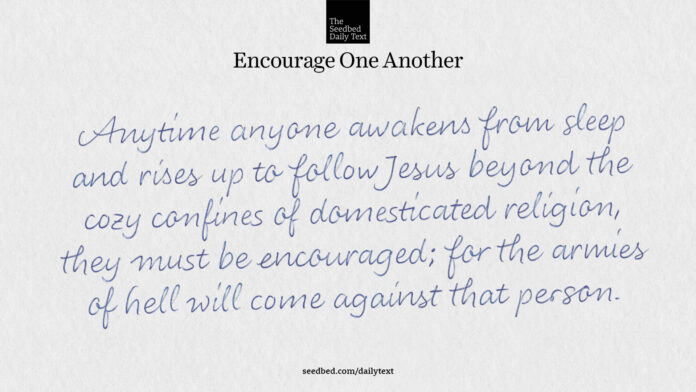 33 Now all the Midianites, Amalekites and other eastern peoples joined forces and crossed over the Jordan and camped in the Valley of Jezreel. 34 Then the Spirit of the Lord came on Gideon, and he blew a trumpet, summoning the Abiezrites to follow him. 35 He sent messengers throughout Manasseh, calling them to arms, and also into Asher, Zebulun and Naphtali, so that they too went up to meet them.

I never imagined I would go this long on this one story but it is so irresistibly compelling I can’t stop. We must see it through now. Honestly, the bit at the beginning with Gideon threshing wheat in a winepress and the angel addressing him as, “Mighty Warrior,” was the part that I wanted to expose given the larger “encourage one another” theme of the present series. The further I go in, however, something tells me that the Holy Spirit is himself encouraging people in strong and particular ways the further we go. So finish we will.

Let’s get some perspective. After seven years of withering fire and unrelenting oppression, Israel cried out to the God of their ancestors for help. God sent a prophet. Then God sent an Angel to a most unlikely figure, Gideon. Gideon obeyed the Lord’s commands which immediately made him public enemy number one. So life had gone from bad to worse for Gideon. In today’s text, we will see how Gideon’s obedience to God made life worse for the whole country.

Now all the Midianites, Amalekites and other eastern peoples joined forces and crossed over the Jordan and camped in the Valley of Jezreel.

Interestingly, the Jezreel Valley is also known as the Valley of Meggido from which will later be derived the name, “Armageddon,” the battle to end all battles. This is really bad for the people, and especially bad for Gideon, as there was probably lots of causal links being drawn by armchair quarterbacks between Gideon’s destruction of the Altar of Baal and the rising tide of these allied armies coming against them.

This is how it goes so often when someone finally stands up and takes a swing at evil. Evil swings back—and much harder. Things seem to go from bad to worse to worst. It can leave one wondering, “Did we hear from God wrongly?” In truth, the increase of opposition is often the sign of confirmation that you heard right. This is why it is so essential that we strongly and consistently encourage anyone who is even remotely thinking about following Jesus beyond the scope of reasonable, benign church activity and leading a charge into enemy territory.

Gideon now has a target on his back and he is being assaulted from within and among his own people and also from without by enemy forces. Here is how Paul would describe Gideon’s newfound precarious situation:

. . . [H]ard pressed on every side, but not crushed; perplexed, but not in despair;  persecuted, but not abandoned; struck down, but not destroyed. 2 Corinthians 4:8-9

These are the ironic and unwanted signs you are doing something right; that you are onto the scent of the will of God. When we seek to obey the voice of God, we can expect a fight. Anytime anyone awakens from sleep and rises up to follow Jesus beyond the cozy confines of domesticated religion, they must be encouraged; for the armies of hell will come against that person.

Let me issue a caution though. It is easy and common (and dangerous and abusive) for a leader to demonize and vilify anyone who resists their leadership along these same lines. How do we know the difference? Here’s how I think about it. We must know the difference between resistance and opposition. Resistance to our proposal or plan of attack is most often a good thing. It helps to test, clarify, sharpen, and strengthen a plan. The sign of a mature leader is their ability to welcome resistance from others and receive influence. Opposition is a different matter. Opponents don’t usually want to test, clarify, sharpen, or strengthen. They want to advance their own course and often for their own ends. Resistance should be welcomed. Opposition must be confronted. Knowing the difference is the secret sauce of wise leadership.

Father, I do feel hard pressed on every side. Convince me today I am not going to be crushed. I do feel perplexed. Keep me out of the pit of despair. I often feel persecuted. Remind me I am never abandoned. And when it seems I am struck down, I will declare, “I am not destroyed.” Come Holy Spirit and “put on us the full armor of God, so that when the day of evil comes, we may be able to stand our ground, and after we have done everything, to stand.” (See Ephesians 6:13) Show us how to wear and bear the armor in the surprising way of Jesus. In his name we pray, Amen.

Who comes to mind as a person you need to encourage today given today’s reading? How will you encourage them?