As a young minister in British Methodism I was stationed to a village in the North West of England. On arrival I discovered what is a fairly typical Methodist church in Britain, around fifty or so people in the congregation, few children and young people, the average age somewhere between my parents and grandparents’ age. The church was full of lovely, committed and great people but had experienced numerical decline consistently for decades. I arrived as a naive, fresh-faced young minister, passionate that God’s church should grow.

Over the next seven years, together we pioneered plenty of new initiatives and through them reached many new people and the church grew in number. But in periods of reflection, both at the time and since, I reflected on what really made the difference in transitioning the church. My conclusion, was somewhat of a surprise for a natural activist—what mattered most it seems, was not what we did but who we had become. Another way of expressing this could be to say that the culture had changed.

How did this culture shift take place?

First, as the principal leader I began to articulate to lay leaders, people of influence and the wider congregation a vision of a different future. This largely came through painting a verbal picture of a different narrative to the one that had been inherited by most of the congregation. We told stories of revival whether from history or recent times, we spoke about the expectation that healthy organisms should grow and the church should reflect this, and generally sought to raise the expectation among the people, that God longed for a church, grounded in the New Testament mold that impacted its community and grew.

A major source for us in this was Acts 2:42-47, a summary description of the earliest Christian community. We noticed the things they did and as a result ‘the Lord added to their number daily, those who were being saved’. (Acts 2:47) This statement may be guilty of hyperbole, but even if that is the case, it clearly tells us (as do other stories from Acts) that the culture of the early church was one where expectation that growth would occur was high.

2. Steps on the Journey

Using Acts 2:42-47 as our key source material, we began to identify marks or ‘pillars’ of the church as Luke recorded. We named these as ‘engagement with the word/teaching, worship, prayer, fellowship, social justice, evangelism and communion.’

Using these pillars as hooks, we began to review each pillar as expressed in our church, enabling us to have an honest conversation about what we did or didn’t do to express that pillar. As we took time, over months and years to work through this process through preaching, prayer stations and focus groups, we began to make small changes to our church life that reflected the emphases of Acts 2:42-47 that we were identifying as a group.

What happened was that as we continued on this journey we saw the culture of our church change. Welcome and mission came to the fore as key aspects of who we were. In our welcome, we made every effort we could, with the constraints of a building not all that fit for purpose to make people feel at ease and at home when they joined us for worship. We would do our best to explain simply the key elements of worship, why and how we carried them out. We would explain where key facilities were and make clear that people could access them when needed. We made a conscious decision, even though it was counter-intuitive to many, that we would not worry if small children made a noise throughout the morning or, as would frequently happen with my own small children, escape the clutches of their parents and break free running up and down the pulpit steps.

As we spoke frequently as though guests were always present, we soon discovered that they were, as congregation members grew in confidence in inviting friends, neighbors, parents, children to join them at church.

As much as we emphasized simple acts of welcome and inclusion and saw growth through that, so too our desire for evangelism and mission also grew. The congregation realized that we were trying to welcome people well, so that they would stay, gradually discover more of the life of Christ in us as a people and then seek to follow him. As a result, not only was numerical growth expected, but it took place, with the average age decreasing considerably also, as more and more young families joined us.

The final key to this was embodying this culture change myself as the principal leader within the congregation. It was vital to keep re-stating our vision for growth and change, but also embody this culture through my own welcome and reaching out to be inclusive. I needed to be clear about why we were embarking on this journey and celebrate the little victories along the way. At the end of seven years, we looked back together and noticed that there were few major changes along the way, but plenty of little ones, enabling, what was probably the most important change of all, the change in culture. 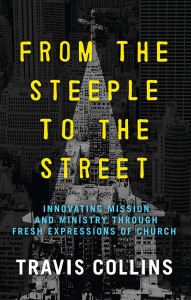 Are you interested in helping your church re-align with God’s mission? Travis Collins has written From the Steeple to the Streets: Innovating Mission and Ministry Through Fresh Expressions of Church to help leaders work through this. Here, Collins reveals how long established congregations are finding ways to engage people unlikely ever to walk through their doors, and fresh expressions of church are engaging people who are “without hope and without God in the world” (Ephesians 2:12, NIV). Get your copy from our store now.