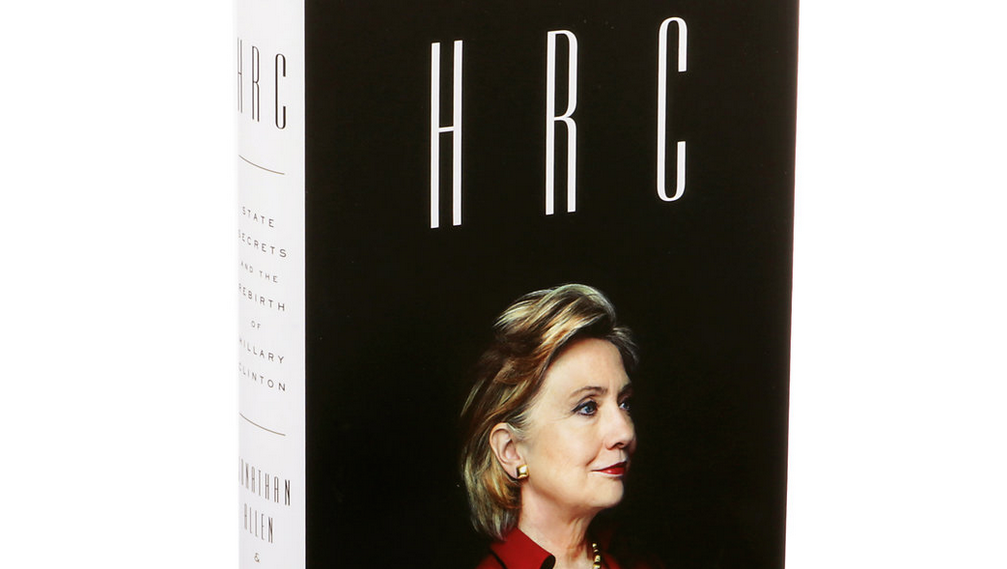 Surprise! John Wesley is mentioned several times in this 450-page book. Donald Trump and Bernie Sanders, not once.

The book is HRC: State Secrets and the Rebirth of Hillary Clinton, by journalists Jonathan Allen and Amie Parnes (New York: Broadway Books / Random House, 2014, 2015). The book covers Hillary Clinton’s life and political career from the time she lost the Democratic Presidential nomination to Barack Obama in 2008, through her four years as Secretary of State, and then the lead-up to her 2016 Presidential bid. The reason Trump and Sanders are absent from the book is that it was published before either entered the race. In my view, this adds a certain strength and balance to the authors’ reporting and analysis. 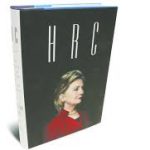 The authors seem fair, with no apparent axes to grind. They are tough on Hillary at times, for instance when they speak of the political atmosphere of “Hillaryland” and “Clintonworld.” But they also have many neutral and some positive things to say. The book is based mostly on hundreds of interviews with people involved in the events reported, characters who themselves represent a broad spectrum of Hillary opinions. This gives the book balance and a sense of immediacy.

So overall the book is a fair-minded. Critical, but not unkind; reasonably balanced, certainly not vicious, as so much political stuff is these days. The authors point out Mrs. Clinton’s weaknesses but also her strengths and skills. Several key passages reveal, I believe, where Hillary’s heart is.

One fascinating aspect of the book is the story of the gradual shift in the Obama–Hillary relationship from being outspoken rivals, to colleagues in the Obama Administration, to growing mutual respect, and finally to warm friendship. Though this book is preeminently about politics, it repeatedly reminds us that politics has its human side.

Much of the book deals with Hillary Clinton’s tenure as Secretary of State, during which time her national approval rating reached the 70% range. Secretary Clinton drew effectively on her past experience in the rarified atmosphere of Washington DC politics. Within the Obama administration, she bolstered the relative influence of State in relation to other departments and won grudging respect. The authors report,

“Usually the people she deal with, from low-level staff aides in her own building all the way up to the president of the United States, walked away with newfound respect for her. Often they found themselves liking her more with each interaction . . . . [S]he proved herself to be the ultimate politician, a strategic power player whose hard work, command of politics and policy, and deft calculation produced more admiration than animosity.”

An official who worked closely with Defense Secretary Robert Gates gave the authors this appraisal of Secretary Clinton: Working with Hillary, “you sort of begrudgingly begin to respect her, then you outright respect her and her incredible work ethic.” Eventually “you actually like this person, and she’s charming and she’s funny and she’s interesting and she’s inquisitive and she’s engaging.”

The authors of HRC have no particular interest in religion or the Christian faith. So I found it especially interesting that (drawing on their interviews) they comment several times on Hillary’s Methodist roots. For example:

“The way Hillary mourns [tragedies], friends say, is to pour her emotion into healing and fixing, an approach deeply rooted in the teachings of John Wesley, the founder of Methodism. That’s what she did when she returned from the Congo, even though she was supposed to have some downtime. She reached out to a wide circle of friends, aides, and spiritual advisers to see what could be done for the women of the refugee camps. ‘She was so mortified by what she heard, she was e-mailing everybody while she was on vacation,’ said one State Department source.”

Another source, whom the authors describe as a “longtime friend” of Hillary’s, said, “She has something more driving her than just power. She has a very strong moral compass that she leans into.” The friend adds, “I think if you had any length of conversation with her as a Methodist, and talked to her about her faith, she would be very insightful.”

Another interviewee commented on Hillary’s reaction when she and the President met returning soldiers’ coffins at Andrews Air Force Base and talked with soldiers’ families. “I did not see her tear up,” the source said. “I just saw her feel it. The face of ‘I’m here.’ I think a bit of it is her Methodist roots and her belief in the Lord and her faith, and then it’s this kind of ‘What am I here to do? I’m here to be that person.’ She believes in service to country and government, and part of her role is that—being that compassionate person” who brings some comfort and conveys the nation’s recognition and grief.

Those who know Hillary well say that she feels “called to public service by a higher power, as expressed in her devotions to the service-oriented Wesleyan faith.” Hillary herself said in an interview, “Look, I do have what I’ve called the responsibility gene. I do believe strongly in public service, and I do have, through my religious upbringing and my faith, a sense of obligation because I’ve been give so much.”

Hillary added, “I really have never lived my life thinking I knew what was going to happen next. I really try to—I mean, it is very John Wesleyan, believe me. I really try to just do the best I can every day, because who knows what’s going to happen next?” Devoting her life to public service, she says, “[I] just feel like every day I’m being true to my values and I’m contributing in some way, and maybe trying to do some good.”

Obviously this is not most Americans’ public perception. Much of the public views Hillary as defensive, secretive, probably duplicitous, hardheaded and hardhearted. Friends who know her tell a different tale. Speaking of the wrenching stories Hillary heard while talking with abused Congolese women, a friend said Hillary “hears these stories, not just with her head and her intellect—stuff goes through her heart.”

Tom Nides, one of Secretary Clinton’s aides, described Hillary in the wake of the Benghazi crisis and its aftermath: “She has this rare ability to be compassionate but also get stuff done. She’s a really good executive. I saw it in real time, and she handled a real crisis.” Secretary Clinton, Nides said, “wasn’t mechanical, screaming at people, but she was emotional, she was firm in getting facts and getting the issues resolved.”

Incidentally, the authors report a 2013 dinner event in Chicago where Hillary met Malala Yousafzai, still recovering from being shot by the Pakistani Taliban a year earlier. “Clinton got the biggest nudge to enter the [Presidential] race from Malala,” the book reports. Malala is quoted as saying that “even in America, people are waiting for a woman president.”

Naturally the whole Benghazi affair gets a lot of attention in the book. The authors report the same thing all the multimillion dollar Congressional and other investigations showed: The tragedy should not have happened, and with more foresight might have been prevented. But Secretary Clinton was not herself involved in any of the key decisions. These were made by State Department officials well below her in the structure of the large department. Still, she publicly took responsibility.

In the wake of Benghazi and then Secretary Clinton’s strategic involvement in Burma and unfolding developments in Israel and Gaza, the authors make this summary assessment: “For all her strategic planning, Hillary is often at her best and most decisive when faced with an emerging crisis.”

Despite the Benghazi debacle, the authors believe Hillary Clinton’s tenure as Secretary of State should be viewed positively. One undersecretary at State put it this way: “Secretary Clinton reintroduced America to the world, and they liked what they saw. They wanted to be a part of it.” The authors add, “There’s certainly evidence to suggest that the world approved more of American leadership during Clinton’s tenure than it did in the years before she took over at State”—whether or not Hillary deserves the credit for that.

The authors discuss Hillary’s last year as Secretary of State and the health crisis after she fell and suffered a concussion. They note, “after Hillary’s fall, the old anti-Clinton conspiracy machine really kicked into high gear.” Having myself followed the Clintons’ political careers for nearly a quarter-century, I know what they mean. Years ago I read The Hunting of the President: The Ten-Year Campaign to Destroy Bill and Hillary Clinton, by investigative journalists Joe Conason and Gene Lyons (2000). I have long known of the sustained multimillion-dollar campaign by political enemies to discredit both Clintons in any way possible, without regard to ethics or truth. If I believed even a quarter of what Hillary’s enemies say, I wouldn’t consider her worthy of the U.S. Presidency. But I don’t believe it.

Hillary and Bill have been their own worst enemies, obviously. We need make no excuses. But neither should we believe the rampant media stories, rumors, and conspiracy theories being circulated by political operatives with unlimited dollars but no scruples.

HRC is well worth reading, whatever your politics. It is a good counterpoint both to the noxiously anti-Hillary books and online trash and to the pro-Hillary propaganda. The Hillary Clinton portrayed here is consistent with what I’ve read and heard previously over the years.

The authors do a pretty good job of describing Hillary Clinton’s political views and policy positions. They note her conviction that government, business, and non-government organizations (NGOs) should work together for the common good. That it is the role of government to catalyze such cooperation. And that government’s primary concern beyond the basics of public order and national security is to be the advocate and defender of the poor, the victimized, and the public generally, not of privileged special interests. This concern is of course biblical.

I generally liked the book, despite the fact that the authors occasionally include crude language. I thought this unnecessary, though in most cases this comes from their quoted sources.

The often caustic political columnist Maureen Dowd has several times used this remark by a Clinton White House aide: “Hillary, though a Methodist, thinks of herself as an Episcopal bishop who deserves to live at the level of her wealthy parishioners, in return for devoting her life to God and good works.” Whether the remark is fair or not, it does echo the public perception paradox of a person who has both served the public and given the appearance (unfortunately common in many influential public figures and high-profile religious leaders) that she is entitled to live and function according to her own set of rules.

The Hillary Clinton pictured in HRC is immensely talented, smart, hardworking, experienced, knowledgeable, and informed. Certainly she is capable of being President of the United States, more so than any other current candidate. She is, I suppose, as flawed as John F. Kennedy, Franklin D. Roosevelt, Abraham Lincoln, and most other capable U.S. Presidents. Whether she can persuade a winnable majority of U.S. citizens that she is the best choice to be the next President will become evident in a few weeks.