I Pledge Allegiance to the . . . - Seedbed
close
Menu 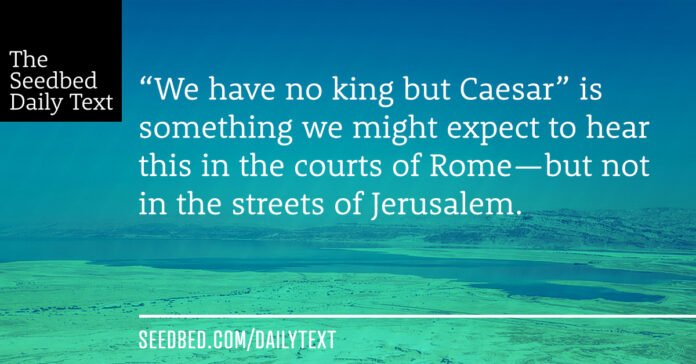 12 From then on, Pilate tried to set Jesus free, but the Jewish leaders kept shouting, “If you let this man go, you are no friend of Caesar. Anyone who claims to be a king opposes Caesar.”

13 When Pilate heard this, he brought Jesus out and sat down on the judge’s seatat a place known as the Stone Pavement (which in Aramaic is Gabbatha). 14 It was the day of Preparation of the Passover; it was about noon.

“Here is your king,” Pilate said to the Jews.

“Shall I crucify your king?” Pilate asked.

“We have no king but Caesar,” the chief priests answered.

16 Finally Pilate handed him over to them to be crucified.

So the soldiers took charge of Jesus. 17 Carrying his own cross, he went out to the place of the Skull (which in Aramaic is called Golgotha). 18 There they crucified him, and with him two others—one on each side and Jesus in the middle.

19 Pilate had a notice prepared and fastened to the cross. It read: jesus of nazareth,the king of the jews. 20 Many of the Jews read this sign, for the place where Jesus was crucified was near the city, and the sign was written in Aramaic, Latin and Greek. 21 The chief priests of the Jews protested to Pilate, “Do not write ‘The King of the Jews,’ but that this man claimed to be king of the Jews.”

We might expect to hear this in the courts of Rome—but not in the streets of Jerusalem.

How many times that very day had they uttered the words they prayed every day?

Barukh ata Adonai Eloheinu, melekh ha`olam . . . which means, “Blessed are you, Lord our God, the King of the Universe.”

Yet when it mattered most, they declared their allegiance to Caesar.

They might as well have been saying, “we have no King but Pharaoh.”

Later that night they would sing the songs of Passover,

Their conversion to the dark side was now complete—they had gone from God as their king to God granting their wishes for a king, and finally to pledging their allegiance to Caesar as their king.

Meanwhile, the King of Kings, was being led to slaughter.

Tonight those same devout voices would close their prayers, captaining their praise with these fateful words of ironic prophecy:

“The stone the builders rejected has become the cornerstone; the Lord has done this, and it is marvelous in our eyes.”
‭‭Psalm‬ ‭118:22-23‬ ‭NIV‬‬

Blessed are you O Lord our God, the King of the Universe, for you have given us in your own son, the King of Kings and the Lord of Lords, the stone the builders rejected, indeed the chief cornerstone. You have done this and it is marvelous in our eyes. We pray in his name, Amen.

1. Do you find all of this as incredulous as I do—the leaders of Gods own people giving allegiance to Caesar as King while crucifying the King of Kings?

2. Does this have any influence or sense of warning about our own relationship to the secular power of the state and its leaders?

3. Did you realize the common pledge of allegiance in those days was, Caesar is Lord?” How does that impact your understanding of The claim, “Jesus is Lord.”