I Taught My Students Heresy (and you can too!) - Seedbed
close
Menu

“[When Jesus] was five years old [he] was playing at the ford of a brook…[and] having made soft clay, he fashioned thereof twelve sparrows…But Jesus clapped his hands together and cried out to the sparrows and said to them: Go! and the sparrows took their flight and went away chirping.” * 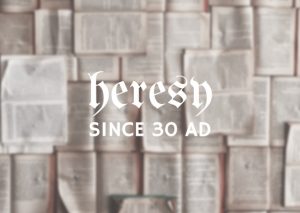 Most have never read from The Infancy Gospel of Thomas.  It’s kind of a fan-fiction book of legends concerning the childhood of Jesus. This is understandable, seeing as how it was disallowed from the New Testament canon early on. But after reading a few stories from The Infancy Gospel, my small group of 10th grade guys could not stop talking!

Here’s the thing. Getting the guys to talk was great. Listening to the questions they were asking was a seminarian’s dream!

“Why isn’t this book in the Bible?”

“What really happened in Jesus’ childhood?”

“Was Jesus fully God? Or was he fully human?”

After that, they began asking to read other books that didn’t make it into the Bible. So we did! We read through The Acts of Paul and Thecla, The Gospel of Philip, and a slew of other gnostic and legendary texts.

The best part of this exercise? Through the exercise of evaluating why these texts were not part of the Bible, and what about them classified them as heresy, they began retaining important information about Scripture and about faith. They began to realize that God didn’t just hand down a book from the clouds. Rather, God worked through people like us to write down the stories of Jesus and his followers as well as the many acts that followed. God worked through people to form the early church, doctrine, and creeds. And God continues to work through people to accomplish God’s will of bringing the kingdom to earth.

Faith is often messy and difficult. Sometimes we think that the early church had it easy. However, when we strip away that facade, we engage the text like never before!

For more information on non-canonical texts, visit http://gnosis.org/. Feel free to email me with questions at andrewdavischappell@gmail.com.